Guests at one of London’s top hotels can use some truly unique bicycles to get around the British capital over the next couple of months, with the bikes in question designed by artist Benedict Radcliffe in collaboration with some top names from the world of design, music and fashion including designer Ron Arad, singer Paloma Faith, and footwear designer Patrick Cox.

The six bicycles will be auctioned off to raise funds for the Elton John AIDS Foundation, and the auction is currently online on W Hotel’s Facebook page, with bids being accepted from now until 29 October.

Between now and then, however, they will be available to use, free of charge, to the Starwood Hotels-owned W Hotel on London’s Leicester Square, although we'd wish good luck to anyone taking to the streets of the West End on the Ron Arad-designed one. Still, we suppose it's puncture-proof. Some of the designers involved have provided their own suggested itineraries around the city.

Simon Prytherch, Director of Fundraising at the Elton John AIDS Foundation, said: “We’re delighted that W London is continuing to support us with a concept that hits a note with all of London. This will be the second initiative they have activated with us, following the W Premiere event in March and we are looking forward to seeing the bikes in action.”

W London General Manager, Kevin Rockey, added, “W London guests are playful and adventurous so we cannot wait to see the bikes zipping around Soho or taking people further afield. We are delighted to continue supporting Elton John AIDS Foundation with this fun project for London.”

The launch of the initiative is accompanied by a short film showing Jordan Smith of MixTMeat putting the W New York bike through its paces with some fantastic tricks both on the streets of London and in the hotel itself – we’re guessing this isn’t quite the type of battering that the hotel is expecting its guest to give the bikes when they borrow them.

“Arad's work uses biomorphic shapes created from his favoured medium – steel,” says Radcliffe. “This bike will take bicycle design to the limit by producing new shapes and forms, yet still be rideable. Here he is reinventing the wheel quite literally.” “I wanted to explore the idea of a bike with no wheels, with just the suspension, like a smile without the cat,” explained Arad. “I was curious how I could make this happen, especially as it's being fuelled by such a great cause… and I can tell you that what’s happened from a two minute sketch is already a miracle!"

“Paloma Faith’s bike oozes vintage, glamour and music,” says Radcliffe. “Piano keys feature on the mud guard, a 50’s radio is set into the handlebars and the whole bike is covered in a feather design. Leather panniers and a classic saddle are on the back for carrying records. The frame is a ladies’ step-through version in keeping with a vintage theme.” I wanted to customise this modern fixed-gear bike with an edge of beauty giving a real vintage, classic and traditional feel,” revealed Faith. “There’s a definite nod to the 50s in the bike.”

This, explains Radcliffe, is “a bar-on-a-bike. Complete with drinks rack fitted to the front of the bike allowing the rider to host a party on two wheels. The cocktail basket features a limited edition bottle of Belvedere vodka.” The illustrator, who is represented by Breed London, says: “I’m excited to collaborate with W once more and now with EJAF. My illustrations from the Wyld bar shot glasses have been transferred onto the bike frame as well as the glasses themselves in the form of a mobile Wyld Bar on wheels. Stabilizers maybe required here!”

The designer also outlined her recommended route: “Cycle from Camberwell (South London Gallery, The Sunday Painter, Hannah Barry Gallery) down Trafalgar Avenue and Grange Road to pick up the cycle path on Tower Bridge Road - pass Tooley Street and Jamaica Road (Design Museum if want stop) cross over the bridge and through the Minories onto Whitechapel Road (Whitechapel Art Gallery if want) down Brick Lane and then you're spoilt for choice. Hoxton, Spitalfield City Farm and Bethnal Green (Museum of Childhood is excellent).”

Radcliffe himself customised this bike, and says: “There are many layers to New York and also many W Hotels (five in total). Across bold and bright colours on the bike sits a grid design. This design mirrors the New York ‘streets and avenues’ layout and the location of each W Hotel is marked on the ‘map’. From W New York – Downtown to W New York – Union Square, if ridden in New York the rider could use the design to navigate back to the hotel! The colour-blocking idea is inspired by the new W brand identity.” 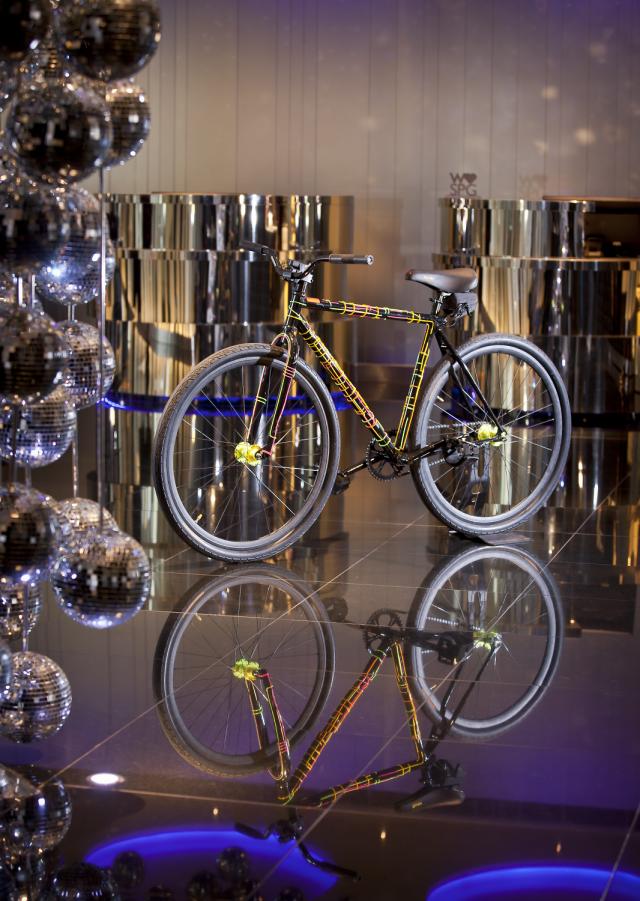 “This bike is playful, feminine and encapsulates the youthful vigor of the ALICE brand which is underpinned by quality, attention to detail and high manufacturing standards,” says Radclffe. 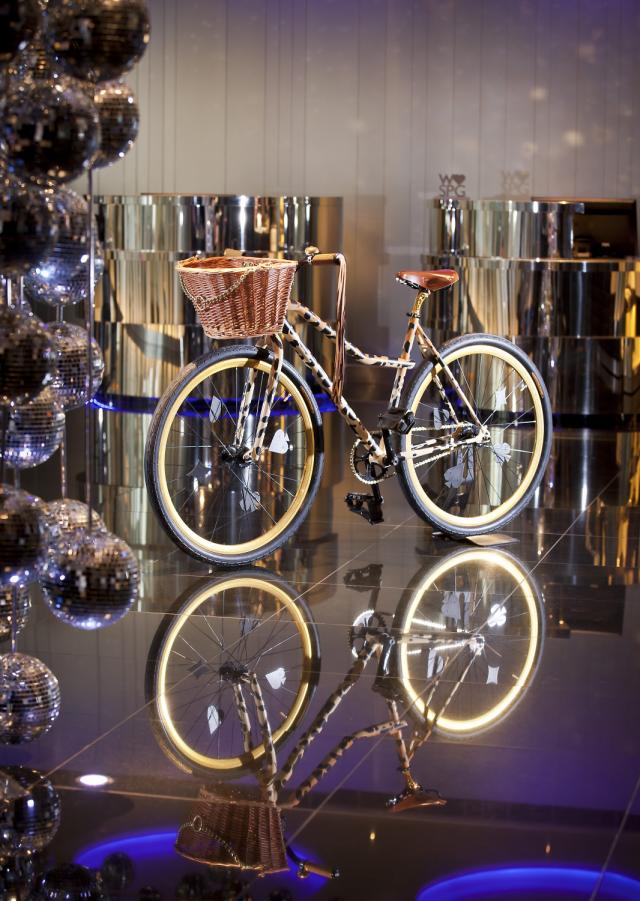 Fashion designer Temperley says: “I am attached to my bike and wouldn't be without it. I have one the city in Notting Hill where I live and another in the countryside. It’s faster and easier when I am travelling alone in London and in the beautiful deep English countryside its magical to pedal along the amazing narrow lanes to the coast.

“My favourite route in London is from Colville Mews in Notting Hill, outside my store, through Portobello antique markets stopping at my favourite vintage clothing haunt, ordering new art supplies on Kensington Park Road.

“Then onto Relik vintage shop past the quirky interior antique shops and cafes on Goldborne road. At the weekend I cycle all the way down the canal to meet friends for lunch in Primrose Hill and then on those Regent’s Park and past London Zoo to Camden. Here I wonder around Chalk Farm Market, cycling back up the canal fulfilled and inspired, stopping at a friend’s houseboat for a glass of wine at sun down.”

Sadly, there’s no picture yet of the bike customised by Cox, but Radcliffe outlined the thinking behind the design, which he says is “based on an old-school three-wheeled (two wheels at the front) Miami ice cream bike,” resulting from the footwear designers’s new venture, Cox Cookies and Cake. The result, says Radcliffe, is “an unambiguous 'Patrick Cox' Bike.”

“The fact that there is a big box on the front means that things can be hidden in there – a 12volt battery powering the music system, fluro lighting and a coffee machine<” adds Radcliffe. “Water for the coffee machine can be stored here too. Cakes and cookies will be displayed on the top of the 'box' in much the same way as they are displayed in the shop. The bike will be super slick shiny gloss black and with the colour coming from the lighting and possibly various componentry.

“The bike is quite architectural and has fold-down seats on the front of the 'box' so that when it is stationary two people can take a perch and enjoy the coffee and cup cakes. The 'umbrella' or 'shelter' will be powder-coated, laser-cut aluminium with slightly abstracted playful tessellating images from the Cox cakes. The bike will be visually and aurally (playing everything from Ron Hardy, Larry Heard, Larry Levan through to the wonder boy that is Nicolas Jaar) really fun.”

He continued: “I have personally known Elton John and David Furnish for many years and I am blown away by the work they and the Elton John AIDS Foundation do. Their fundraising projects always have a creative, modern twist and as a designer, I love that. I am delighted to be involved with the W London WOW Bikes campaign and I know that we will end up with an amazing collection of customised bikes given the artists and designers involved.”