Round-the-world cyclist James Bowthorpe, who we earlier reported was left shaken after an apparent kidnap attempt in Iran, has posted a blog detailing his experiences.

The 31-year-old, who is attempting to break Mark Beaumont's round-the-world cycling record, left the country early after being chased and almost forced off the road by a group of young men in a car.

The incident happened on Wednesday (April 29), his first day in the country, as he attempted to get the miles in by cycling into the evening, at around 7pm.

He says: "About 1km out of town a car pulled in front of me, making me stop; five yound men, taking pictures with their mobiles. I cycled off after they started jeering; nobody likes being jeered at. For the next five kilometres they followed me, alongside shouting, in front or just behind., getting increasingly confrontational.

"I was scared and shaking a bit, completely out of my depth; I could feel my elbows wobbling but I thought that if I carried on they would get bored. It was now properly dark.

"They went ahead again and I saw their breaklights go on; as I got closer I could see they had got out and were standing by the road. I should’ve stopped and turned around but I didn’t know what grade of menace they represented. Luckily I was going  quickly and managed to swerve out of the way as they tried to grab me off the bike.

"They were soon back alongside, gradually edging me off the road. The principle grabber had moved to the front passenger seat and was leaning out of the window shouting “passport! PASSPORT!”.

"I braked and crossed the highway where two teenagers were walking along. They had seen a bit of what was happening I guess and looked concerned. The car accelerated off up the hill; I had been saved by two 16 year olds!"

James' full blog is a good read, but the short version is that the teenagers got the police involved and he was soon being looked after in a police station before being transferred to a hotel for the night.

James was later told he had had a lucky escape as the men in the car were likely to have attacked him and robbed him, or worse. James says philosophically that one of his resuers, "actually ran his finger across his throat, but who knows?"

Thankfully his early experiences in the country were not to be repeated and James otherwise experienced exceptional levels of support and hospitality from everyone he met. However, clearly shaken up by the incident, and running short of cash because he was unable to use his card, he decided to leave the country early and flew out of Tehran on May 3.

Read the full blog here. We will continue to follow James' progress.

Some of the other challenges James has faced; camping in a wood (next to a road), and playing menu roulette in Bulgaria. Photographs courtesy of James Bowthorpe. 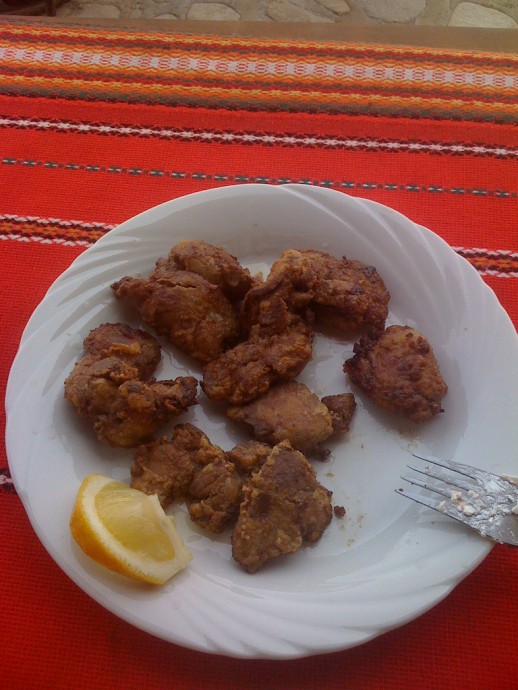