Saunter down this shuffling pedestrianised suburban shopping street in this seaside town and you can get a nice haircut, a pie from Greggs, a smart pair of dead man's beige slacks from any one of the collection of charity shops, a cup of warm brown liquid they call coffee, and pick up a custom built titanium road bike.

Hidden above the Phones 4U shop in this unassuming quiet thoroughfare that is George Street in Hove is newly opened Prestige Cycles and they will happily equip you with a hand-built bike from antipodean frame-builders Baum Cycles.

Baum Cycles are based in Geelong (you’ll recognise that name from the 2010 UCI Road World Championships) just outside of Melbourne, and have three titanium and two steel road frames in their range plus a Ti and a ferrous touring frame amusingly called (to anyone with a knowledge of Outback history at least) the Wills and Burke respectively. Their frame inventory is completed by a pair of titanium and a steel mountainbike models, with track and cyclo-cross frames available on request.

The eponymous head man Darren Baum worked as a certified aircraft engineer and stainless steel TIG welder before he become a frame builder. All stages of manufacture of a Baum frame from C.A.D. to tube mitring, butting and painting are completed in-house to ensure absolute control, and head tubes, bottom brackets and dropouts are all designed and/or machined by Baum to ensure that alignment, weight and stiffness meet their requirements.

Baum don’t make a stock bike that you can pick off the shelf, every frame is made to order, and exclusive importers Prestige Cycles have a cyclefit system in their shop to deduce your perfect frame dimensions. Standard frame sizes from 48 to 63cm in 1cm jumps are offered as a base for a frame and the geometry is then tailored to make each bike specific to its rider. For road bikes this means fiddling with the top tube length plus or minus 10mm, the head tube length ±5mm and top tube slope (4-6°). US Grade 9 Certified tubing is used for the titanium bikes while the steel frames are a blend of Columbus, Reynolds and Dedacciai tubes with Reynolds 953 stainless pipes also an option. Baum frames come with a lifetime warranty for the original owner for manufacturing defect, and you can race them without voiding it. 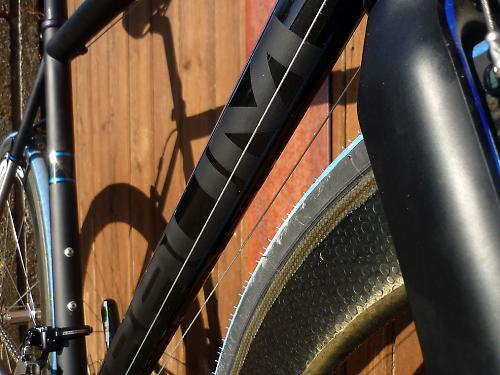 The Romano is Baum's most accessible of Baum's three titanium road offerings. Hand made from CWSR Grade 9 Certified straight-gauge tubing they suggest it's a favourite among criterium privateers, and the go-to frameset for the heavier or very aggressive rider as it's a glutton for punishment. Next up the ladder is the Cubano with butted and formed titanium tubing billed as a supreme race frame. Top of the Ti-tree is the Corretto, bespoke down to the butting, making it one of very few titanium frames in the world where every tube is butted with the individual rider in mind and whether they want to chasing crits, cols or cafés. Baum are surfing the wave of steel being a viable frame material once again with the Ristretto and Espresso, T.I.G. welded with a pick and mix Dedacciai, Reynolds and Columbus tubing to construct a frame most suited to the needs of the rider. Frames feature anti-corrosion treatment on all tubes, inside and out, a custom lightened bottom-bracket shell, butted or machined head tubes, Wright Brothers stainless steel drop-outs and a neat quick-change chain hanger.

All Baums are painted in the paint facility they developed with the help of PPG, the worlds leading supplier of high performance paints which puts around 50,000 colours at their disposal out of which Baum have cherry-picked 30 standard colours for their bikes, but a quick look at their website suggests that standard is anything but on a Baum. Prestige Cycles currently have a Corretto and a Ristretto in stock for stroking gently and both were given a quick spin on a sunny afternoon. The Corretto is kitted out with a top-drawer package as befits it's stature and tickles the scales under the chin at 15.07lbs with a SRAM Red groupset, a sprinkling of Oval, 3T and Fizik with Zipp 404 wheels and a custom paint job including matching stem and seatpost icing the cake and bumping the price up to “about £9000.00”. Cof. The paint on the Corretto is simply stunning; even if you don't like the colour scheme the technical artistry is outstanding. Gloss and matte panels wrap the tubes with the Baum logo perfectly reversed out, all bands, stripes and pinstripes are done in paint rather than by decal because Baum say they're fussy about little details, and it's not all fur coat and no knickers either: the welding underneath is immaculate.

In the pedals the Corretto feels every single penny of an expensive bike. Forward motion is almost effortless. On roads that are known to be rough and draggy the Corretto hummed and skimmed over the tops, and giving it some beans climbing in the big ring it definitely had that bike Holy Grail thing of stiff yet springy. It honestly felt like cheating. Riding the less exotic Ristretto afterwards felt almost unfair on the bike, but it still gave a good account of itself. With a more workman spec sheet consisting of SRAM Force, with USE and 3T components and Reynolds Assault wheels the price is by comparison a more palatable £5800. It's obviously not as flighty and skittish as the Corretto, carrying a bit more at 17.04lbs, but it's certainly no slouch and at times more pleasingly planted; that could be a bonus over a succession of miles, and a fine example of how a nice steel bike should feel.

Luckily there's a cash-point at the end of the street, just past the Pound shop.