Leopard Trek boasts come of pro cycling's biggest names, including the Schleck brothers and Fabian Cancellara, and they're all riding Trek 6.9 SSLs.

Frank and Andy Schleck – Frandy, if you like – are the team's big general classification contenders in the Tour de France, elder brother Frank currently sitting in third place overall just 4secs off the lead, with Andy 8secs further back in ninth.

The two Luxembourgish brothers (yep, Luxembourgish is the right word, apparently. Who knew?), along with Cancellara and legendary hard man Jens Voigt, were aboard bikes from Trek’s big US rival Specialized while riding for Saxo Bank last year. 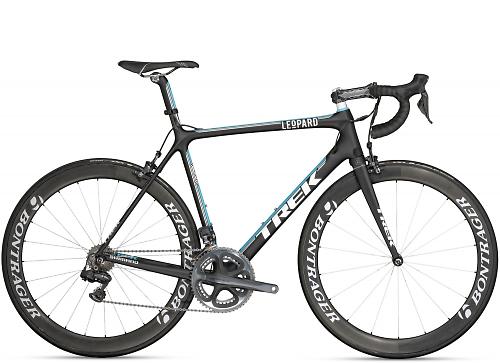 For the first time in a few years, Trek haven’t altered the structural design of the top-level Madone for 2011. They seem to have been dropping a few grams while at the same time adding stiffness regularly for ages now – which is a clever trick if you can do it – and we guess there’s only so far you can take any particular design before you reach its limits. That said, we wouldn’t take bets against them pushing things further next time around. 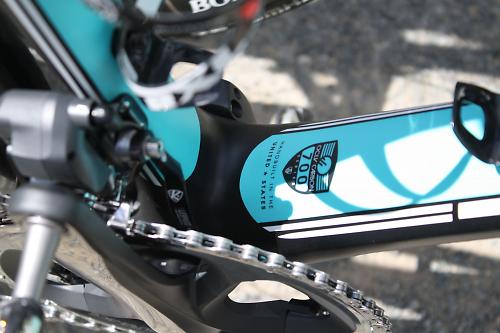 The 6.9 SSL, which is also ridden by Team RadioShack, is made from Trek’s HexSL carbon. It’s an aerospace-grade material, they reckon, which sounds impressive but bikes traditionally spend most of their time on the ground so what’s more relevant is that it builds into frames that are light, stiff and strong. 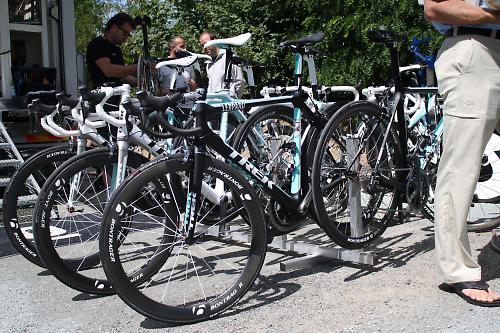 Trek say that HexSL is virtually as stiff as high modulus carbon fibre and over four times as strong. This means that they can get the same strength and performance from a single layer as from multiple layers of high mod material and so save weight. Trek’s claimed weight on the 56cm version of the 6.9 SSL with the lightest finish available is just 815g. The frame comes with Trek’s own oversized BB90 bottom bracket for increased rigidity while the head tube houses a standard 1 1/8in bearing at the top but a large 1 1/2in bearing at the bottom, again for extra stiffness. This is a route many manufacturers go down with their high-end performance bikes. 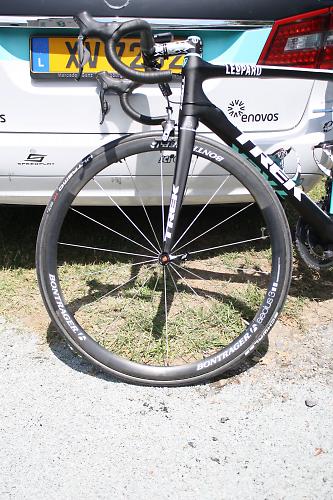 The seat tube is topped by Trek’s Ride-Tuned seatmast which is designed to add comfort and save weight while the fork comes with an asymmetric steerer intended to provide a small amount of front-to-rear flex while maintaining side-to-side stiffness for precise handling. The cables are routed internally and a DuoTrap speed/cadence sensor is recessed into the left hand chainstay so there’s no need to fit one externally. 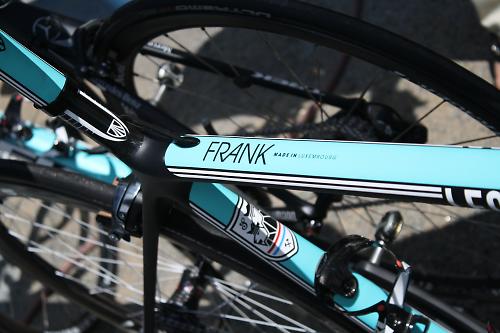 Frandy’s bikes feature all-new paint schemes. Here’s what Trek have to say on that score:

Emblazoned with a modern take on the traditional lions of Luxembourg, Andy and Frank Schleck’s Madone 6.9 SSL’s were designed to match heritage with the progressive clean aesthetic of the Leopard Trek team. “We took the idea that the Schlecks are ‘Luxembourg’s Pride’ and we used that to drive the design direction,” said Trek Art Director Jesse LaLonde. “These bikes are unlike anything we’ve done before. There are elements that are meaningful to Andy and Frank specifically. We know how proud they are to represent their country and we wanted to convey that.” In addition to the double lions, the bikes feature a two hammers decal inspired by the Schleck’s tenacious work ethic. 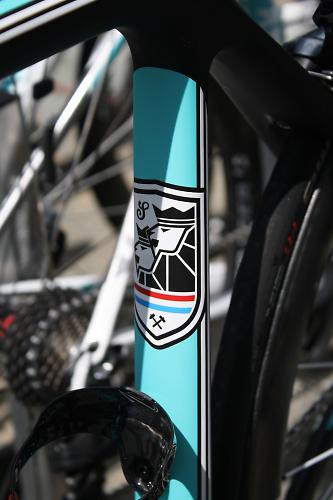 ‘Progressive clean aesthetic’, eh? Thought so. They’ve each got their name on the top tube too… along with ‘Made in Luxembourg’. That refers to Frandy, not the bikes. If you’re wondering when we’re going to drop the ‘Frandy’ thing, by the way, the answer is: not for a while yet. We’re still enjoying it immensely. 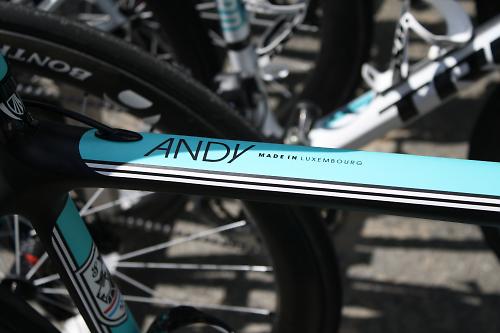 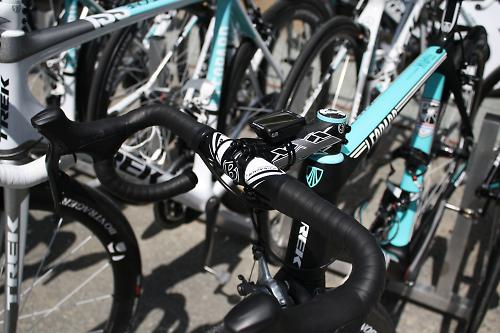 The bar is an alloy Race Lite rather than one of Bontrager's carbon options; lots of the top riders stick with alloy for extra stiffness. It's custom-butted 7075 aluminium, shot peened, with an anodized finish. 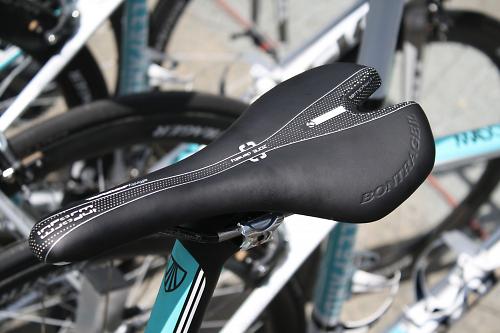 The saddle is a Bonty Affinity RXL with a carbon-reinforced base and hollow titanium rails.

Those wheels are Bontrager Aeolus 3s. The only thing is, Bontrager don’t make Aeolus 3s. They do 5.0, 6.5 and 9.0, but there’s not a 3 in the range. We asked the guys at Trek, of course, and they told us… nothing. Politely, like, but they’re not giving out any details until the wheels are launched. When will that be? According to one Trek source, any time now. According to another, they’re still a way off, so who knows? 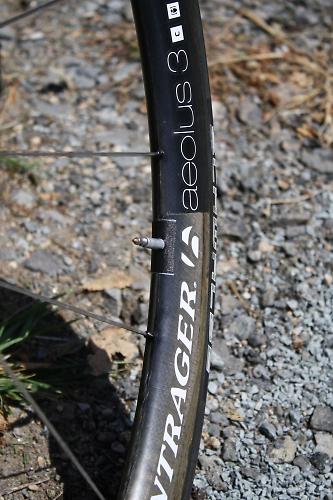 In the past Bontrager have collaborated a lot with HED, so maybe there’s a link there, although that’s conjecture. The tyres are Schwalbe Ultremo HT tubs, we know that for sure. 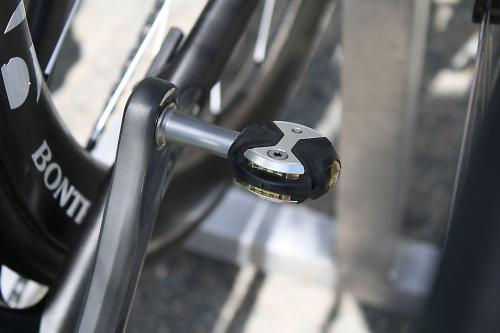 Leopard Trek use Shimano Dura-Ace groupsets with Di2 electronic shifting, the battery squirrelled away underneath the bottom bracket, and Speedplay’s pedals with tons of float. 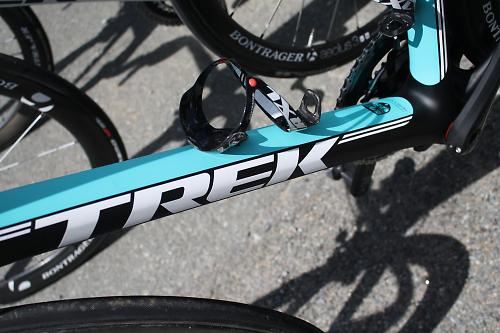 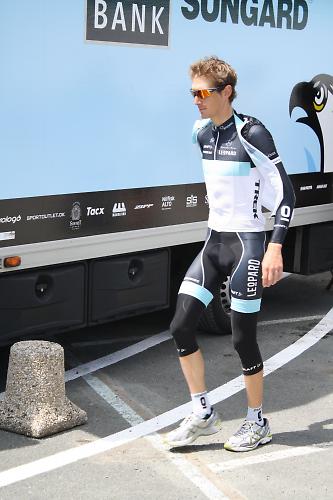 Craft provide the Leopard Trek clothing while the helmet is the brand spanking new Bontrager Oracle. We reviewed it a while back. It’s not the lightest lid around but it’s low-profile with masses of ventilation, which will be especially welcome when the peloton hits the big climbs. 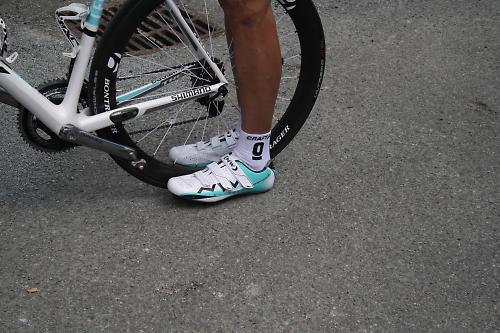 The shoes (here modelled by Jens Voigt) are Northwaves. A pair of Evolution SBS (not the ones pictured, which aren't in the current Northwave range) in Leopard Trek livery will set you back £204.25… as will a pair in any of the standard (black, white, red) colour options. If you like the look of Frandy’s bikes and would like something similar, including a similar paintjob, you can get one through Trek’s custom bike program, Project One. Visit www.trekbikes.com/projectone. 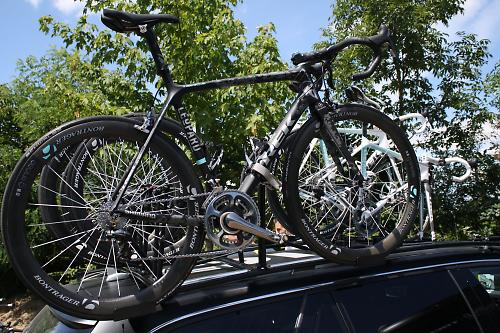 Of course, Fabian Cancellara is on the Leopard Trek team too, and the Swiss time trial specialist gets his own unique paint job on his Madone 6.9 SSL, based on his Spartacus nickname. 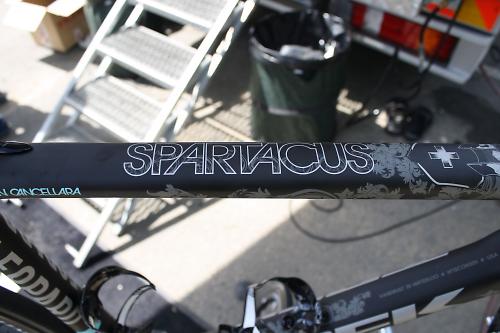 We already quoted this when we looked at Cancellara’s time trial bike but here’s Trek’s spiel on the design.

“Designed in collaboration with graphic illustrator Hydro74, Fabian Cancellara’s Madone and Speed Concept were crafted to convey the powerful racing the rider known as “Spartacus” is renowned for. To properly marry the Spartacus theme with LEOPARD TREK’s established look, Trek called upon the raw illustrative style of Hydro74 for the design of the icons of Spartan warriors; the helmet, shield, and spear. Elements special to Cancellara are incorporated throughout the bike including the Swiss Cross centered upon the shield and the seven spears, representing the racer’s lucky number seven.” As Canis Cibo commented, Spartacus wasn’t a Spartan, but let’s not get into that right now. This paintjob, like those of Frandy's bikes, is available through Trek's Project One scheme. It’s hard to tell which model of Bontrager stem that is because it’s been Spartacused up to the max, but it looks like an alloy Race X Lite from here, and those are Race Lite 7075 aluminium bars. 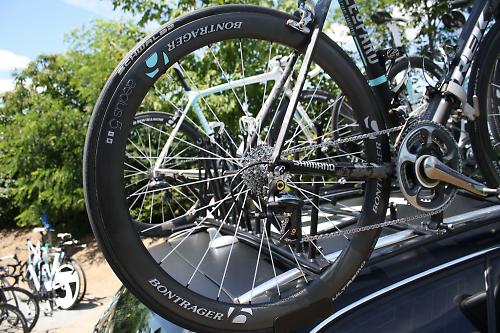 The wheels are marked up as Bontrager Aeolus 5s, not to be confused with the Aeolus 5.0 ACCs that are in the current range. They have different rims, different hubs and different spokes… different everything. These look similar to the Aeolus 3s (see above) but with deeper rims. We’re not sure whether the Aeolus name is on there because these wheels will eventually be added to the range, or if it’s just to throw busybodies like us off the scent. Trek are keeping schtum. 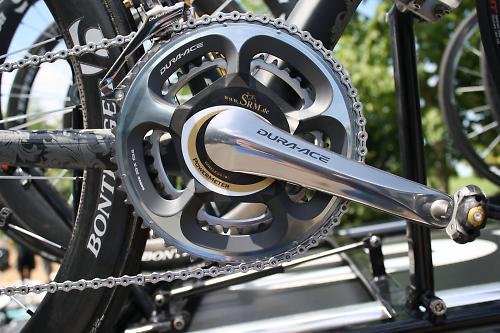 Like his team-mates, Cancellara uses a Shimano Dura-Ace groupset although he has an SRM powermeter for all his wattage-measuring needs. He gets a few gold bolts on his Dura-Ace groupset too, we’re guessing because he’s the current World and Olympic time trial champion. 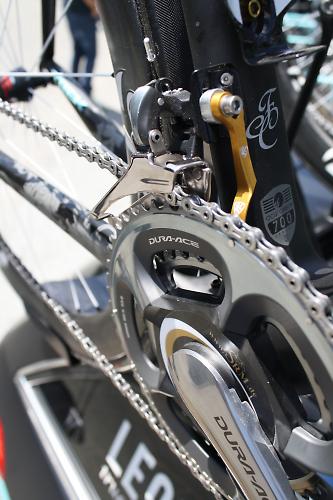 Even the chain catcher than stops him overshifting inward is gold. You can get away with it if you’ve got Cancellara’s race CV. One last thing. As you can see, this is the top tube of Jakob Fuglsang’s bike. The WW 108 logo refers to Leopard Trek’s Wouter Weylandt, the Belgian rider who died following a crash in this year’s Giro d’Italia. His race number was 108. Nice touch.