Four-time World Time Trial Champion Fabian Cancellara will be using a Trek Speed Concept when riding against the clock in this year’s Tour de France, and we were lucky enough to get our hands on it when we visited the Leopard Trek hotel near Nantes yesterday. We’ll have a quick look at the graphics before checking out the technology…

We’ve heard that the Swiss rider isn’t too keen on the Spartacus nickname, but if that’s true he's certainly hiding it well… the graphics on Cancellara’s Speed Concept, like those on his Trek Madone 6.9 SSL road bike, are entirely Spartacus-themed. 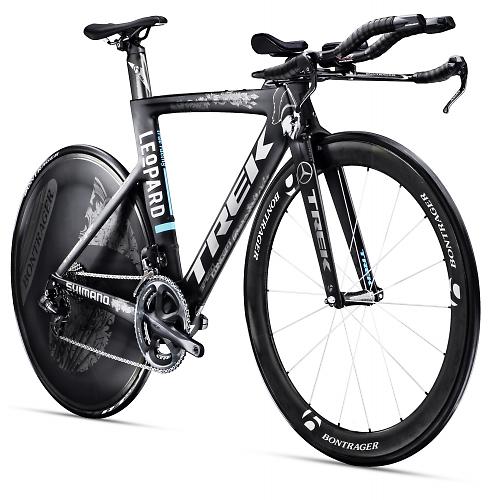 The artwork was done by an illustrator known as Hydro74 (we’re guessing that’s not the name on his birth certificate), and Trek explain it like this: “Evoking iconography of the classical Greek warrior-state of Sparta, Cancellara’s bikes are emblazoned with the Thracian helmet and the dory, a spear employed by all Spartan warriors. Through the direction and collaboration with Trek’s in-house design team, Hydro 74 created a series of icons including the helmet, spear, shield, and a carved serpentine floral pattern.”

So there you go. 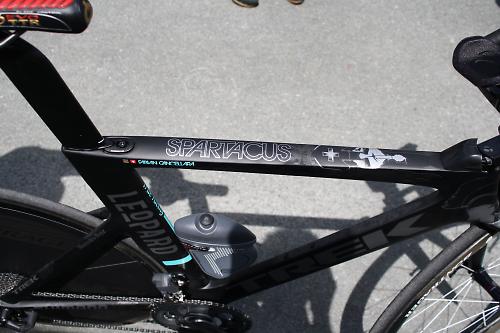 “The challenge this project presented was in how we marry the raw, powerful illustration style of Hydro74 with the clean, classic aesthetic that we created for Leopard Trek,” said Trek Art Director Jesse LaLonde. “There are elements throughout the bike that are special to Fabian that we utilized as in the seven spears representing his lucky number and of course the Swiss Cross.” 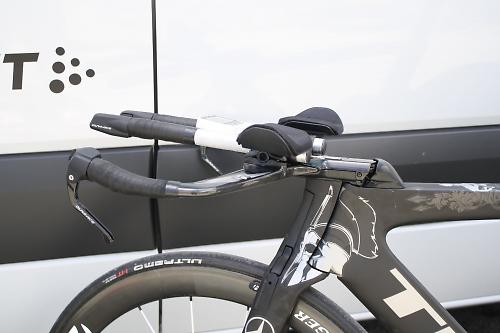 It was painted by hand at Trek’s manufacturing facility in Waterloo, Wisconsin, and you can have the same design if you use Trek’s Project One custom bike programme. Of course, you’ll have to buy a bike to put it on too. 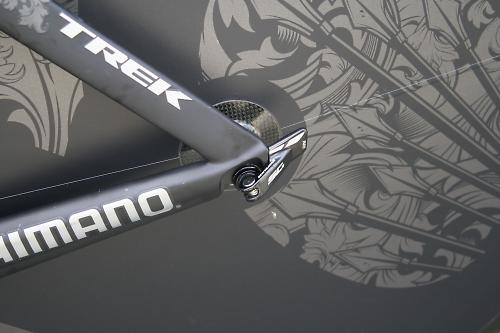 The bike is built around the same frame as the one used for the Trek Speed Concept 9.9 that we reviewed recently. We won’t go into too much depth here – check out the review for all the details – but the design is based around Trek’s Kammtail Virtual Foil (KVF) technology. Essentially, Trek have designed the frame tubes with a 5:1 depth: width ratio and then chopped the trailing edges off square so that the actual ratio is more like 3:1.

This allows the bike to pass UCI regulations and, Trek say, means it is more aerodynamic at yaw – when the virtual wind (the virtual wind caused by the actual wind combined with the bike’s movement) is at an angle. Plus, you won’t get flattened if the wind hits you side-on. 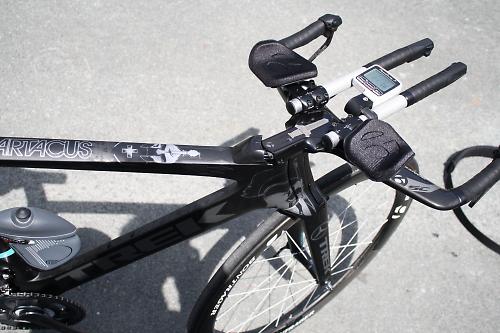 Cancellara doesn’t have some of the advantages that we had with the 9.9 version, though. The profile of his aerobars isn’t as deep, for example. Ours wouldn’t have got past the UCI’s equipment police so Spartacus has to have a less extreme version. They’re the same idea though – super-skinny to present as little frontal area as possible to the wind – while sticking within the rules. 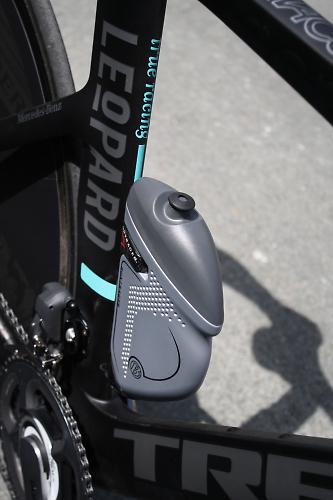 The pro cyclists aren’t allowed to fit the aero-enhancing Speed Storage Draft Box behind the seat tube either although a Bontrager Speed Bottle is permitted. Speaking of skinny stuff, this pic of Cancellara’s bike from the front gives you a good idea of what we’re talking about (the bike, not Tony. No need for funnies). 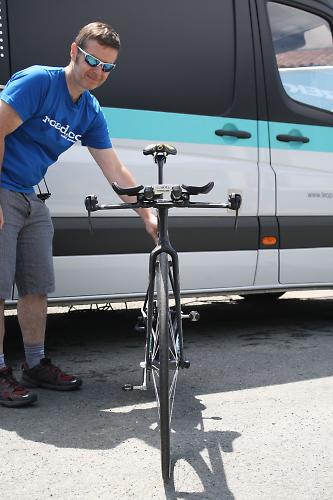 Cancellara’s bike comes with Shimano Di2 electronic shifting which allows him to change gear both when his hands are on the extensions and when they’re on the base bar – when climbing out of the saddle, for example, or sprinting to the finish line. This is a significant advantage that Di2 has over a mechanical setup; you don’t need to sit down and disrupt your rhythm at an inconvenient moment. 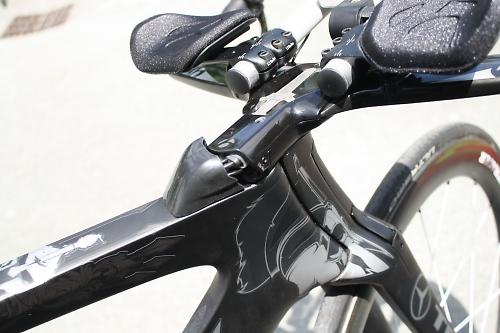 The cables run internally virtually all the way from the bars to the mechs and brakes, heading through the stem and then straight into the frame. You can just catch a glimpse when you turn the bars sharply.

The Di2 battery sits underneath the bottom bracket, by the way. It’s fairly tucked away there but surely the manufacturers will come up with a more aerodynamic placement sooner or later, perhaps inside one of the tubes. Trek integrate a speed/cadence sensor into the left-hand chainstay of many of their bikes (including the Speed Concept; you can see it here); they should be able to do something similar with a Di2 battery in the seat tube or down tube. It might be a lot more difficult if they’re not going to affect frame rigidity, but someone at Trek must have had the idea already. If not, they can have this one on us. That’s assuming they can find room in there, what with all the space the engine must take up inside Cancellara’s frame (just a joke. Calm down). 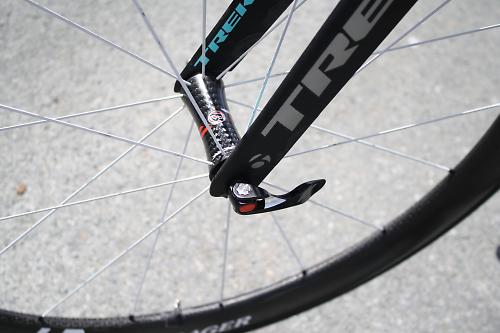 The wheels are from Bontrager which is Trek’s own component brand. That front wheel is a bit of a mystery. The hub appears to be the one Bontrager use on the Race XXX Lite wheel where the spoke heads sit inside the hub body, but that carbon rim doesn’t look like one from the current Bontrager range. It has a profile that’s closer to a U-shape than a V-shape, and it's pretty wide. Bontrager have collaborated with Hed on some wheel development in the past so we wouldn't be surprised if that turned out to be the case here too. RadioShack are using these wheels as well, and they've been used at quite a lot of races so they'll probably get released to the public sooner or later, but Trek aren't giving out any details at the moment. 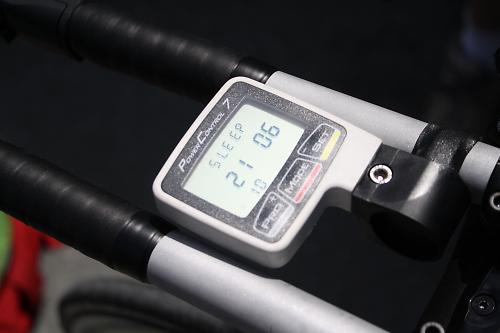 Cancellara’s bike comes fitted with an SRM Power Meter which is by far the most-commonly used system among the professionals, and like the rest of the Leopard Trek team, he uses Speedplay pedals. He doesn’t use a Bontrager saddle, though, despite Bontrager being the team’s official saddle supplier. 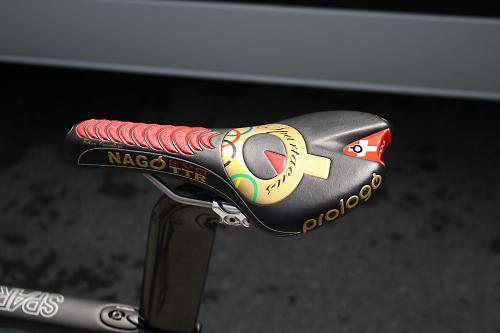 The official publicity shot (the full-bike shot on a white background, way up above) might feature a Bonty saddle but Cancellara actually uses this personalized Pro Logo Nago EVO TTR, which is the same one (or at least the same design as the one) he was using last year when he was on Saxo Bank. That white cross on a red background is the Swiss flag and you can see the Olympic rings which commemorate Cancellara’s gold medal in the time trial at Beijing in 2008.