We can't really test it for real as it's only a prototype – and it's not even a certainty to go into production – but we have had a spin on the Bullet, the belt-drive fixed bike from Chelmsford-based Milk Bikes. And it's a lot of fun, for sure; not without a couple of niggles as you'd expect from a prototype but a very striking and usable town bike nonetheless. In terms of technology, the big news is that the Bullet uses the Gates Carbon belt drive system. Belt drive bikes have been around for ages – almost as long as chain drive bikes, in fact – and you may have tried one back in the mists of time. If you have, then forget about it, because the Gates drive isn't like that at all. Longitudinally it's as stiff as a chain, it runs under high tension and there's no need to lubricate it, so it's efficient, clean and completely silent. Most of the time you wouldn't know you were riding a belt drive at all, except when you end up somewhere quiet and you realise the bike makes no sound at all.

The stiffness of the belt also means that it's up to the forces involved in stopping a fixed by using the drivetrain. The first time we tried to skid it, however, we realised that there was no lockring on the sprocket... lucky we fitted that brake, eh! We couldn't get a lockring in either, as the sprocket is much deeper than a chain one and our lockring tool wouldn't fit. So no skids for us. That's where the lockring should be...

The belt drive has some advantages over a chain, the main ones being that it's clean and quiet. It's as low-maintenance as a chain too, possibly even more: James Bowthorpe completed his round-the-world record attempt on a belt drive bike and only needed to change the belt once in 18,000 miles. There's drawbacks too, though. The most obvious one is that you can't split it, so you have to split the frame instead. Normally that's done on the seatstay and that's the case here, with a removable section to get the belt in and out. 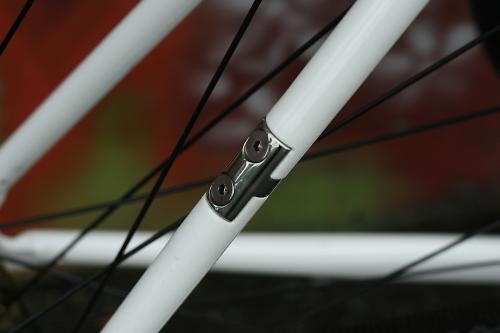 Take this out to get the belt in

The next issue is alignment: belts are much fussier than chains when it comes to the drive line, a couple of millimetres either way and they tend to work themselves off the sprocket. Gates have addressed this with a new version of the belt that has a channel down the middle, and the sprocket and drive ring have central fins to locate the belt. Presumably it's going to be a bit more expensive though, as there's more machining involved.

The last problem is tension. In order to work efficiently the Carbon belt needs to be under pretty high tension. We've snapped grub screws in fixed frames before now trying to wind up the tension in a belt, so Milk's snail cam system was a welcome sight. It's very straightforward: loosen off the track nuts and you can use the cams to tension the belt. Once it's tight you can lock off the cams with a small bolt while you tighten up the wheel. It works really well and is a lot more robust than a grub screw. Enough about the belt, what about the frame? Well it's a nicely put together prototype, Tig welded from Cromoly with an interesting upwardly curved top tube. Most striking is the fact that the bike uses an integrated seat mast design; we're not sure we've seen another fixed bike with one. The frame is mated to a straight blade fork and there's brake mounts front and rear shold you want them; we fitted a front brake.

The graphics on the bike are all hand-drawn. They look great but it's not something you could really translate to a production environment, unless there's a factory in the Far East we don't know about where everyone's a dab hand with a Sharpie. Stranger things have happened... 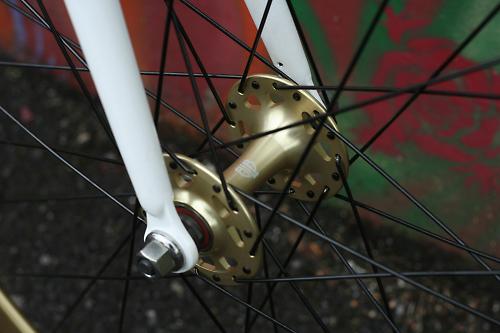 Geometry is not quite track but still pretty tight; coupled with a stubby Brick Lane Bikes stem and narrow riser that makes for very sharp handling. BLB supply most of the finishing kit here, including the saddle, cranks, pedals and hubs, which are built up with Velocity rims.

Okay, it's fair to say that we haven't done hundreds of miles on the Bullet but we have given it a run around Bath for the last couple of weeks, and we're generally impressed. A frame that's running a belt drive has to cope with quite a bit of tension in the rear triangle and the Bullet coped admirably. there's plenty of stiffness at the rear; the belt feels pingy and direct and it's also eerily silent. And good looking. Honking the bike up to the top of the valley was a bit of a chore as it always is on a fixed, but standing up on the pedals didn't make the bike complain, it was always a willing climber and the frame was springy and responsive with just a touch of give. The straight blade fork is fine as regards tracking but it's quite easy to induce a bit of judder under braking. This is probably partly down to the fact that the Velocity rim doesn't have a machined brake track, but it might also be symptomatic of the fact that it's not quite stiff enough; it's difficult to say.

Around town the lively steering and small footprint make it lots of fun. My personal preference would be to gear it down slightly for better escapes from the lights, although others might prefer a longer cruising gear. At speed the bike doesn't feel especially nervous, in spite of its sharp steering. The Brick Lane pedals and power straps are a viable alternative to SPDs if you want to wear your sneakers, although with more and more SPD-ready casual shoes coming online from the likes of Kursk and DZR, that's the route I'd take.

All in all we had a very positive experience of the bike, and it's certainly a head turner around town. People do like to see something a bit different, and it's certainly that. Whether it will go into production will depend on demand, so if you'd like to see it hit the shops, head over to www.milkbikes.com and let them know...