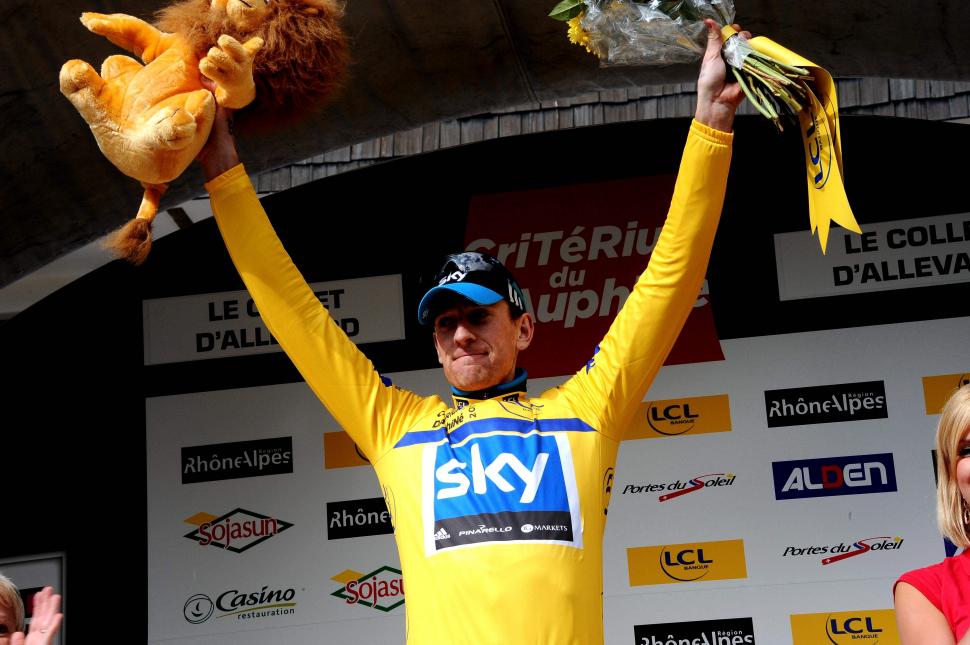 Bradley Wiggins has today become only the third British rider to win the Criterium du Dauphiné, exactly half a century after Brian Robinson’s win in 1961 and more than two decades after Robert Millar won in 1990. The Team Sky rider held a 1 minute 26 second lead going into today’s final stage, won by Joaquin Rodriguez of Katusha, who took his second stage in two days. Wiggins crossed the line safely moments later in the group containing his closest challengers, the three time Olympic track champion thereby securing what is biggest win on the road.

On Friday, Wiggins’ Team Sky colleague Geraint Thomas had assumed pace-making duties at the front of the yellow jersey group on the lower slopes of the final climb to help protect his team leader’s advantage, and yesterday Edvald Boasson Hagen undertook a similar role to great effect.

Today, it was Rigoberto Uran’s turn to do likewise, and the Colombian, who joined Team Sky from Caisse d’Epargne at the end of last season, did exactly what was required of him as the race headed up the climb of the Toussuire that brought this year’s race to a close, and which came immediately after the descent of the Col de La Croix du Fer.

The first man over that penultimate summit, Europcar’s Thomas Voeckler, showed some great bike handling skills as he headed down through a series of hairpin bends to the foot of the Toussuire, in the processs dropping the last survivor of an earlier escape group, FDJ’s Thibault Pinot.

The pair came back together on the final climb, and were joined by Rabobank’s Robert Gesink, who had attacked from the main group.

Then, with 6km to go, Saxo Bank-SunGard’s Chris Anker Sorensen, winner of the Toussuire stage on the 2008 Dauphiné, also managed to bridge across to the three riders at the head of the race.

Passing the sign marking 4km from the summit finish, the quartet out in front had an advantage of 15 seconds or so over what was now a select chasing group of just ten riders, including Wiggins in the race leader’s yellow jersey, his closest challengers, Cadel Evans and Alexander Vinokourov, and points classification leader Rodriguez.

It was the Spaniard, winner of yesterday’s Stage 6, who attacked from that group, the Katusha rider swiftly joining the four riders ahead of him. Behind, Wiggins was starting to struggle at the rear of the group, but somehow managed to dig in and cling on as Rodriguez and the four earlier escapees were brought back.

The dozen or so riders left in contention passed under the flamme rouge together, Rodriguez again kicking off the front as the road headed uphill and this time staying away to claim his second win in two days. In doing so, he confirmed his win in the points competition and also won the mountains jersey.

Pinot finished second, reward for his efforts throughout the day, while Gesink finished third, and just behind them Wiggins raised his arms aloft to celebrate a victory that British fans will hope augurs well for next month’s Tour de France.