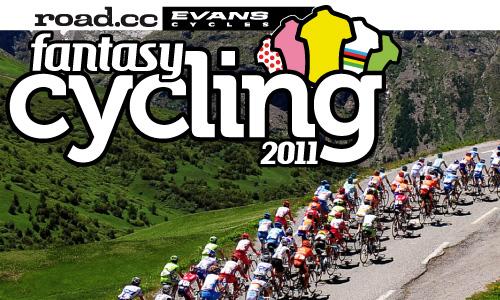 Team Sky star singles out the riders to watch - and he's up for today's Prologue too...
by Simon_MacMichael

Our Fantasy Cycling game, brought to you in association with Evans Cycles, is back this weekend with the start of the Criterium du Dauphiné, one of the traditional build-up races to the Tour de France and as usual we've been speaking to our spy in the peloton, Team Sky's Geraint Thomas, to get some tips about the riders you might want to think about including in your team to hopefully maximise your points haul.

It's a race Geraint knows well ­ last year, he spent three days in the points jersey and picked up a top ten stage placing on each of the first three days. So what kind of rider does Geraint think has what it takes to win this year's edition?

"I think it will be someone who can time trial as well as climb. The last two stages are very tough with uphill finishes, and someone like Tony Martin of HTC-Highroad is definitely worth a shout. Tejay van Garderen as well from that team got third on the podium last year, so they have a two-pronged attack."

The 2010 winner, Janez Brajkovic of Team RadioShack, is back to defend his title and Geraint says "he was super strong in the Dauphiné last year, so if he's riding well again he'll be pretty hard to beat."

Last year's second-placed rider, Alberto Contador, has elected not to contest the race this time round, preferring to keep a low profile in the build-up to the Tour after winning the Giro.

Other big names missing include Leopard Trek's Schleck brothers, Frank and Andy, but Ivan Basso and Cadel Evans are both here and can be expected to figure high up the GC.

As far as the latter two are concerned, Geraint says "you can put money on Sanchez getting up there on the mountain stages, while Van Den Broeck may not get a podium but he'll be knocking on the door of the top five and it's the kind of race he'll start to get results in ahead of the Tour."

Geraint's own Team Sky goes into the race brimming with confidence after a successful Bayern Rundfahrt that saw stage wins for Edvald Boasson Hagen and Bradley Wiggins ­ the latter easily winning the individual time trial from world champion Fabian Cancellara ­ as well as the 25-year-old Welshman himself taking the overall title.

Once again, the British ProTeam has put out a solid line-up for the Dauphiné, and most if not all of those riders are likely to figure in its line-up for next month's Tour de France.

"It's definitely a strong team going to the Dauphine and everyone riding it has a shot at riding the Tour, hopefully we can continue on from last week. Obviously it's a step up from Bayern Rundfahrt to the Dauphine, but Brad's going really well, I think he can get up there on the GC and we've got Edvald in the sprints as well.

"With the Prologue there's something for me to go for as well, there's going to be some very good bike racing throughout the week and I think we've got a chance every day."

The Dauphiné Libéré is run by ASO, so you'll find up-to-date information on the start list at letour.fr. Best of luck with your picks!