Did you watch stage seven of this year’s Giro when Belgium’s Bart de Clercq just managed to stay ahead of the field on the final climb to take the first win on his pro career? Chances are, you read about it. De Clercq was riding a Canyon Ultimate CF SLX.

The Omega Pharma-Lotto team, which also includes Classics king Philippe Gilbert, have bikes built up differently to this one – a Team Replica model is available – but the frame and forks are the same. They ride standard bikes from stock. 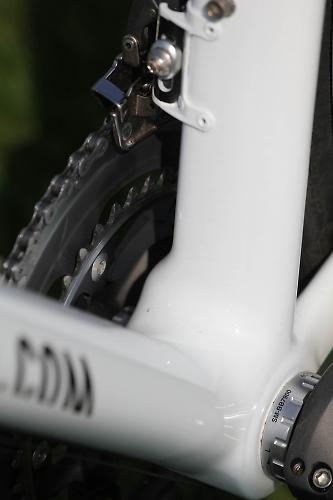 The carbon-fibre Ultimate CF SLX frame features Canyon’s Maximus seat tube which is characteristically flat on the driveside, creating clearance for the front mech and chainrings. The design is intended to convert your force into forward movement as efficiently as possible.

If you missed the hubbub – some were calling it a hullabaloo – Canyon and Cervélo got all shirty with one another (it’s a legal term) over the patent before doing some swapsies (another legal term) and making friends. Cervélo are allowed to continue using a similar design, Canyon got the right to use certain Cervélo patents, and everyone is happy again. Which is nice. 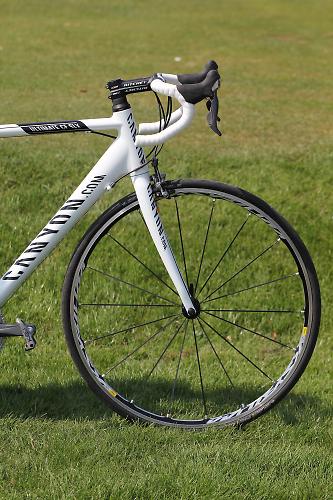 Anyhow, back to the plot… The down tube falls into the colossal category. It’s ovalised up by the head tube junction and measures a whopping 70mm top to bottom. By the time it reaches the bottom bracket the axis of the oval has flipped the other way and it reaches across the full width of the BB shell. It looks like it could withstand a train crash never mind a cyclist’s muscle power, but we’ll find out for sure when we hit the road. 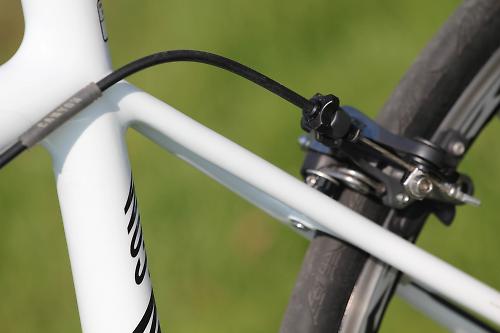 Canyon use what they call VCLS Technology out at the back end, VCLF standing for Vertical Comfort, Lateral Stiffness (they missed a big chance to use the phrase ‘vertical compliance’ there). Essentially, the super-skinny seatstays are designed to smooth over bumps in the road so you feel more comfortable and there’s less strain on your muscles. 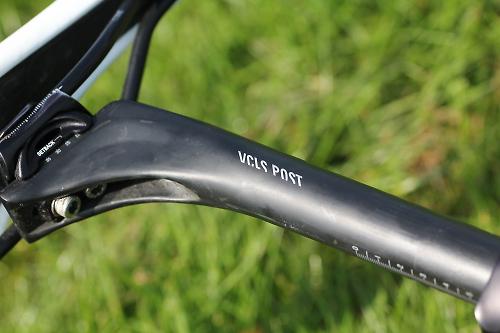 The new seat post gets the VCLF designation too. Canyon use basalt fibres in there – yes, basalt; out of volcanoes – because, they say, these are four times more elastic than carbon fibres, offering better damping and increased comfort. The post is a slim 27.2mm in diameter, which should help on that front too. We’ll be interested to see if the road.cc butts can detect that out on the worst Tarmac in the west of England. 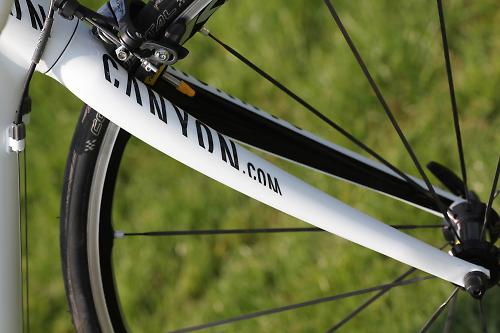 The One One Four SLX full-carbon fork comes with a hollow design crown and weighs in at under 300g – pretty darn light by anyone’s standards. It fits via an innovative i-Lock headset (1 1/4in up top, 1 1/2in down below) that Canyon have developed with fellow German brand Acros. 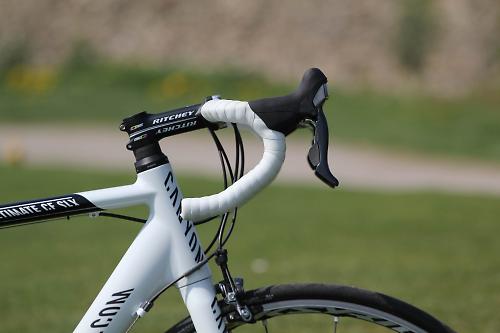 Rather than an expander cone sitting inside the steerer, the headset clamps to the outside of the steerer. Once the stem is fully tightened, you remove any play with an iddy biddy little grub screw. The idea is to remove any possibility of damaging the steerer. Plus, you can move or change the stem without affecting the preload on the headset. Interesting. We’ll report back once we’ve investigated fully. 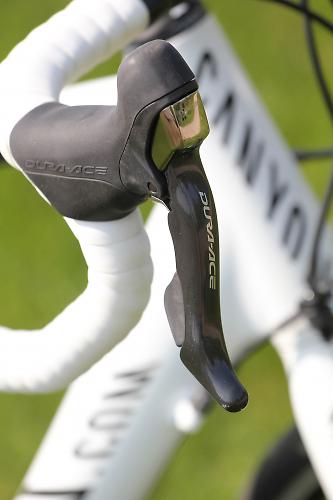 As for the rest of the kit… the groupset is Shimano’s top-level Dura-Ace with Mavic’s bombproof yet reasonably light Ksyrium Elite wheels and Conti Grand Prix 4000 tyres. That all sounds excellent. The saddle is a Selle Italia SL Kit Carbonio, you get a Ritchey WCS aluminium cockpit, and that’s about yer lot.

On paper – or computer screen – this seems like a helluva lot of bike for £2,649. That’s still a lot of cash to spend on a bike, but for a pro-level frame and Shimano’s top mechanical groupset it looks incredible value. The proof of the pudding, though, is in the eating… and with that in mind, I’m outta here and onto the Queen’s highway. We’ll have a ride report up before you know it.