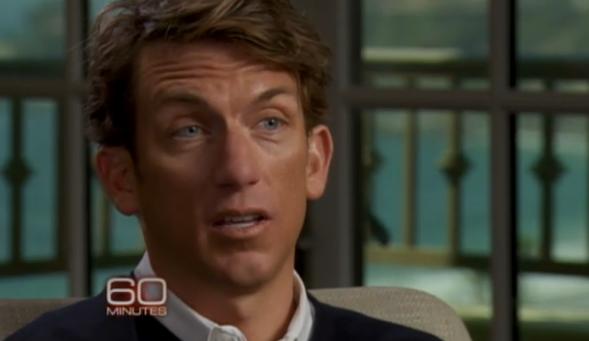 Former US Postal Service rider Tyler Hamilton has told one of America’s leading broadcast journalists that he saw Lance Armstrong inject himself with EPO and that the seven-time Tour de France champion used the banned substance to help secure his first win in the race in 1999 as well as during subsequent editions.

“I saw [EPO] in his refrigerator...I saw him inject it more than one time like we all did, like I did many, many times,” Hamilton told Scott Pelley, host of the CBS show 60 Minutes.

Pelley has spent six month investigating the issue of doping in cycling in the US, with the show, due to be broadcast this Sunday evening, inevitably focusing on Armstrong who along with other riders and staff of the former US Postal Service team is the subject of a federal enquiry.

With Twitter abuzz late last night as cycling fans and pundits discussed the latest accusations, Armstrong tweeted simply: "20+ year career. 500 drug controls worldwide, in and out of competition. Never a failed test. I rest my case."

Yet Hamilton is just one of a number of former members of the US Postal team subpoenaed to give testimony to a grand jury in Los Angeles as part of the investigation.

He retired from cycling in June 2009 shortly before being handed an eight-year ban for doping, having previously served a two-year ban for blood doping and also being implicated in Operacion Puerto.

His gold medal in the 2004 Olympic Individual Time Trial was also achieved under a cloud of suspicion, with Hamilton testing positive for blood doping but escaping on a technicality after the testing lab froze his B sample, rendering it unusable.

Memorably, Hamilton once insisted that his abnormal test results arose from his having had a phantom twin that had been absorbed within his own body while he was a foetus inside his mother's womb.

Now, however, like Floyd Landis before him, in pointing his finger at Armstrong Hamilton has finally admitted his own use of performance enhancing drugs. Indeed, at the same time as CBS went live with his allegations, Hamilton sent a letter he had written to close friends and family to make his confession. The text of that letter, a copy of which was also sent to ESPN, appears at the end of this article.

Armstrong, for his part, continues to maintain that he has nothing to hide and has never failed a drugs test; according to CBS, Hamilton reveals that his team leader confided to him that he had indeed failed a test at the 2001 Tour de Suisse.

Rumours that Armstrong failed a drugs test during that race aren’t new; last year, world cycling’s governing body the UCI stated that no rider on the 2001 Tour de Suisse had tested positive for EPO after Landis accused it of helping cover up a positive test by Armstrong.

Another former US Postal team member, Frankie Andreu, was also interviewed for 60 Minutes, telling Pelley that he hiimself began doping due to results being achieved by other cyclists whom he believed were on drugs.

"Training alone wasn't doing it and I think that's how...many of the other riders during that era felt, I mean, you kind of didn't have a choice," he explained. Andreu has also testified before the grand jury, as has his wife Betsy, who has claimed that she heard Armstrong confess to a doctor after being diagnosed with cancer that he had used performance enhancing drugs.

As they did with Landis, Armstrong and his defence team are likely to reject Hamilton’s claims by pointing out that the word of a man who until now has lied about his own doping can’t be trusted, that Armstrong has never failed a drugs test, and that the whole investigation is a waste of public money.

Mark Fabiani, counsel to Armstrong, aissued a statement on Thirsday saying: "Tyler Hamilton just duped the CBS Evening News, '60 Minutes' and Scott Pelley all in one fell swoop. Hamilton is actively seeking to make money by writing a book, and now he has completely changed the story he has always told before so that he could get himself on '60 Minutes' and increase his chances with publishers.

"But greed and a hunger for publicity cannot change the facts: Lance Armstrong is the most tested athlete in the history of sports: He has passed nearly 500 tests over 20 years of competition."

Hamilton, however, isn’t just another domestique who worked for Armstrong at US Postal; he was one of the team’s most complete riders, and one of his team leader’s most trusted lieutenants, helping him win the Tour de France three times before moving to CSC at the end of 2001.

That date in itself is significant – Hamilton’s time at US Postal didn’t overlap with Landis’s spell there, so the pair’s allegations cover separate periods and different incidents.

Fourth overall in the 2003 Tour de France despite fracturing his collarbone on the opening day, Hamilton never got the better of Armstrong in thcycling's biggest race after leaving US Postal. A courtroom battle may be another matter altogether.

Text of Tyler Hamilton's letter to family and friends:

I hope this finds you all doing well.

First of all, sorry for sending this out as a group letter. If there was any way I could come visit each of you individually, I would. I hope we are together soon.

There's no easy way to say this, so let me just say it plain: on Sunday night you'll see me on "60 Minutes" making a confession that's overdue. Long overdue.

During my cycling career, I knowingly broke the rules. I used performance-enhancing drugs. I lied about it, over and over. Worst of all, I hurt people I care about. And while there are reasons for what I did -- reasons I hope you'll understand better after watching -- it doesn't excuse the fact that I did it all, and there's no way on earth to undo it.

The question most people ask is, why now? There are two reasons. The first has to do with the federal investigation into cycling. Last summer, I received a subpoena to testify before a grand jury. Until that moment I walked into the courtroom, I hadn't told a soul. My testimony went on for six hours. For me, it was like the Hoover Dam breaking. I opened up; I told the whole truth, and nothing but the truth. And I felt a sense of relief I'd never felt before -- all the secrets, all the weight I'd been carrying around for years suddenly lifted. I saw that, for me personally, this was the way forward.

The second reason has to do with the sport I love. In order to truly reform, cycling needs to change, and change drastically, starting from the top. Now that I'm working as a coach, I see young people entering the sport with hopes of making it to the top. I believe that no one coming into the sport should have to face the difficult choices I had to make. And before the sport can move forward, it has to face the truth.

This hasn't been easy, not by a long shot. But I want to let you know that I'm doing well. The coaching business is more fun and fulfilling than I'd ever imagined, and Tanker (editor's note: Hamilton's Golden retriever) and I are loving our Boulder life. I recently turned 40, and my friends threw the best '80s-themed surprise party in the history of the world (hey, most of you were there!). Life is good.

Again, I just want to say I'm sorry, and that I hope you can forgive me. What matters to me most are my family and friends. I'm deeply grateful for all your support and love through the years, and I'm looking forward to spending time with all of you again, hopefully soon. My mom and dad always told me that the truth would set me free. I never knew how right they were.