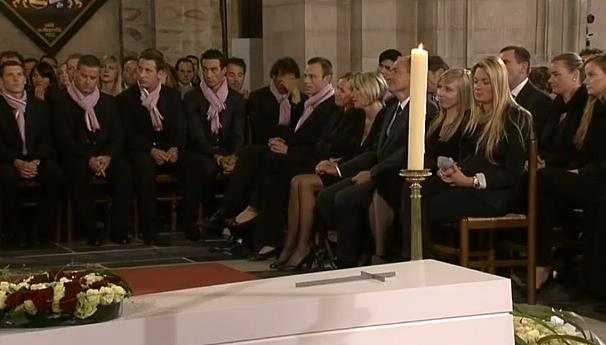 The funeral of Wouter Weylandt, killed last week following a crash on the descent of the Passo del Bocco on Stage 3 of the Giro d’Italia, took place yesterday in his native town of Ghent, Belgium. Leopard Trek team mates including Frank Schleck and Fabian Cancellara were present to pay their respects, as was UCI President Pat McQuaid, while his close friend Tyler Farrar made an address to mourners, as did former Quickstep team mate Iljo Keisse.

The service, attended by 2,000 people, took place in the city’s St Peter’s church, with proceedings relayed to fans gathered outside via big screens. During an address, the Garmin-Cervelo sprinter Farrar, who lives in Ghent, said that Weylandt "carried with him an energy and a joy that was infectious.

"I thought he was one of the coolest guys in the peleton," he added. "He was intimidating but also worth imitating."

Many of those present, including Farrar, did just that by sporting pink scarves similar to one that Weylandt had taken to wearing in recent months.

Weylandt’s girlfriend Ann Sophie was clearly distraught as she arrived at the church for the service and in a message read out on her behalf said, “I have one thing to cling to - my little angel,” referring to the couple’s child who is due in September.

Both the Giro d’Italia and the Amgen Tour of California commemorated Weylandt’s memory yesterday by holding a minute’s silence.

Leopard Trek pulled out of the Giro following the neutralised Stage 4 the day after Weylandt’s death, in which the team’s remaining eight riders, joined by Farrar, crossed the line together following an emotional ride from Genoa to Livorno. Yesterday, at the Tour of California, its team, including Andy Schleck, led the peloton out at the start of Stage 4 of that race.

In a statement yesterday, Giro d’Italia organisers said: “Wouter may be gone but he remains present throughout each and every stage, he has become the most supported rider at the Giro. Each one of us will see his name, or his dossard '108', countless times throughout each stage.

“A banner across the road, a group of school children, a lonely farmer, all so different but each remembering Wouter. His presence within the peloton has grown bigger daily. His memory has touched each of us and affected us all in different ways, although there is one thing that we all share, it is his loss.

“The peloton is no longer the same. It is missing one of its own. Yet his memory has made us closer than ever before, not many people could do that. We'll see you at the next race.