Before Paris-Roubaix fades into a distant memory, here’s a quick roundup of some of the bikes and kit the pros were using to get them across the pavé. Even when the weather is as good as it was on Sunday, the Hell of the North challenges equipment more than any other race on the calendar. 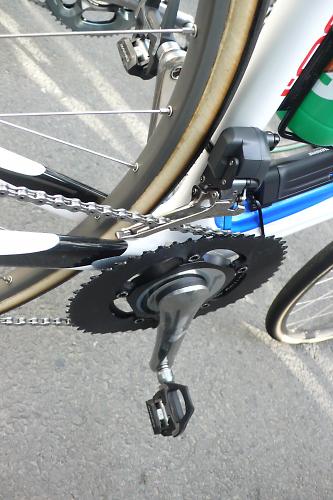 Britain’s own Team Sky changed bikes for the race, going for Pinarello's Kobh rather than their usual Dogmas – which we’ve already had a good look at. As usual, several team members were running SRM PowerMeters, including Geraint Thomas who is one of many riders in the pro peloton using non-round chainrings. Team Sky use O,symetric for their assymetric needs, most of the riders favouring a 52-42 set up. France’s Europcar, whose highest placed rider was Damien Gaudin in 16th, went so far as to ditch road bikes and ride Colnago’s Prestige cyclo-cross bike instead (see top of page and above). It has a carbon monocoque front triangle and lugged seatstays and chainstays, a reinforcing brace between the top tube and the seat tube, and the geometry is designed to be more stable than usual. The team had it fitted with Empella Frogglegs cantilever brakes (below). 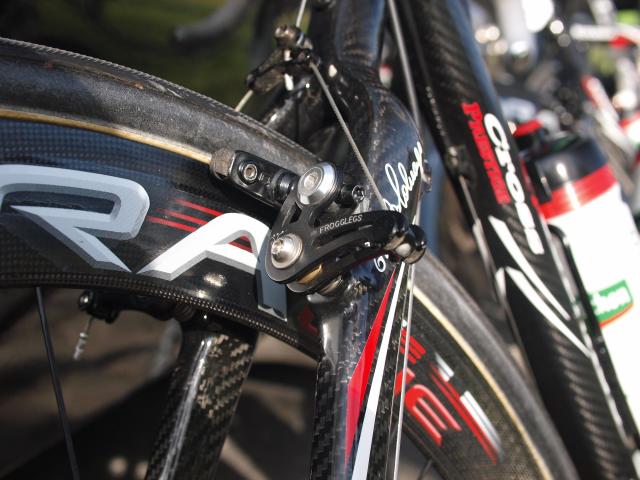 The Cervélo S3 below – with the world champion’s rainbow stripes – can only belong to Team Garmin-Cervélo’s Thor Hushovd. This is his spare bike. The wheels are from Mavic, the groupset is SRAM Red and the chainrings are from Rotor. 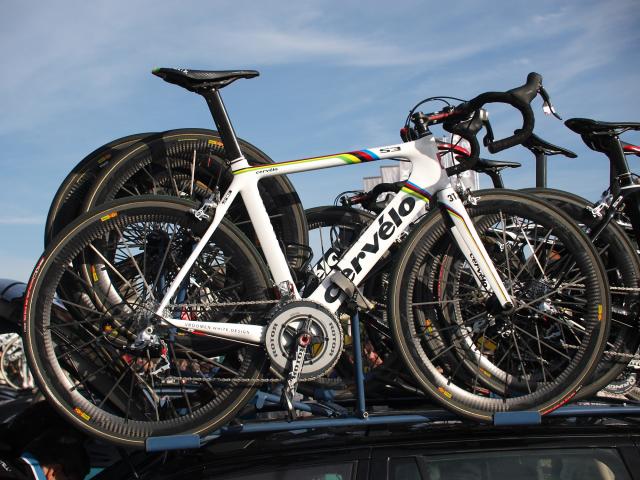 Unlike Team Sky, Movistar stuck with their Pinarello Dogmas for the cobbles, and they continued using the Campagnolo electronic shifting system that they’re trialling this year. They’re the only team to be using it. All the parts are labelled ‘Campy Tech Lab’ which winds us up way more than it should, frankly. ‘Campag’ is classy. ‘Campy’ just isn't. The electronic system doesn’t have an official name yet, nor a release date, although it must be imminent. We’d be surprised if it wasn’t included in Campagnolo’s 2012 lineup. 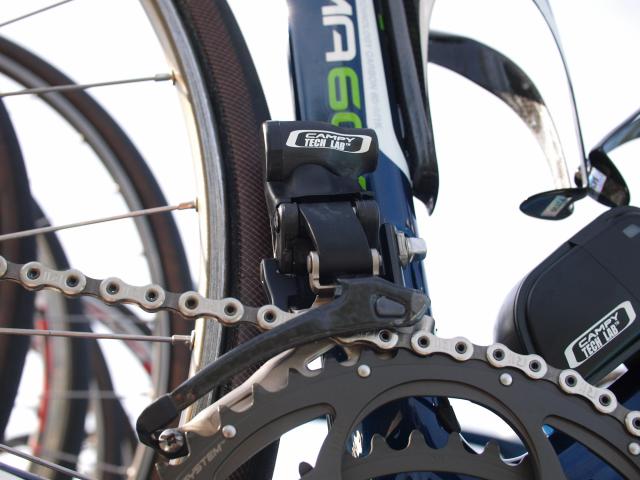 This (below) close-up is of the top tube of one of the Trek Madones belonging to Leopard Trek (don't call them Trek Leopard. Or Def Leppard). That’s a list of the 27 sections of pavé: when each arrives and how long it is. Being Leopard Trek, it’s all done properly. They’ve spent some time on that rather than just taping a bit of paper to the stem. That’s why they’re professionals, see. 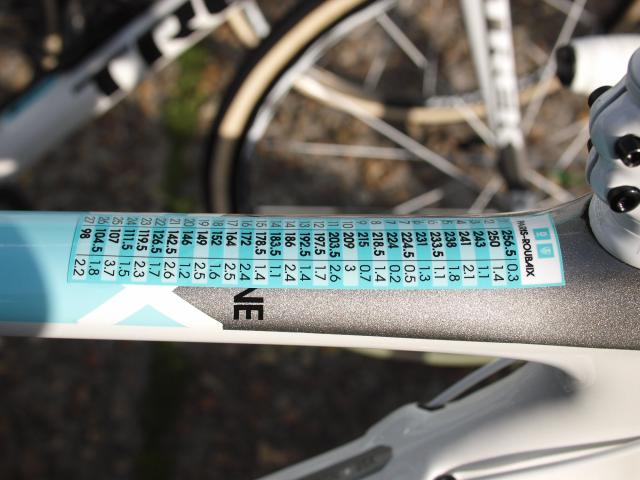 Liquigas-Cannondale were on Cannondale’s Synapses rather than SuperSixes. The whole idea of the Synapse is to absorb shocks and vibration, the rear stays and fork deflecting slightly over uneven surfaces. It also has a longer than normal wheelbase and more relaxed angles which make the handling more suitable for Paris-Roubaix. 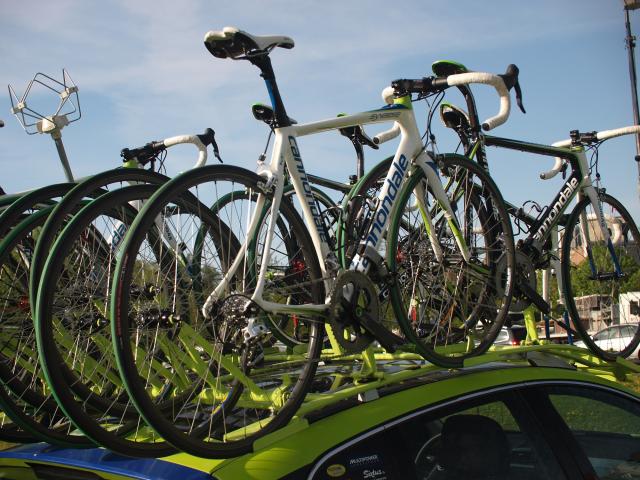 It’s a small point but, like many of the other teams, Liquigas-Cannondale ditched their carbon bottle cages and went for aluminium instead – in this case an Elite Ciussi Gel model that can be yours for £12.99. You can bend an alu cage inwards to stop your bottle making a bid for freedom over the pavé. You can’t do that with carbon.

That may sound trivial, a bit too finickety even, but consider this: it was a loose bottle wedging itself between his seatpost and rear wheel that caused the crash that not only ended Tom Boonen's race, but also brought down Geraint Thomas, who hit the ground hard for the third time that afternoon and would eventually finish outside the time limit. Liquigas-Cannondale are big on colour co-ordination. The head unit on the SRM system is green… 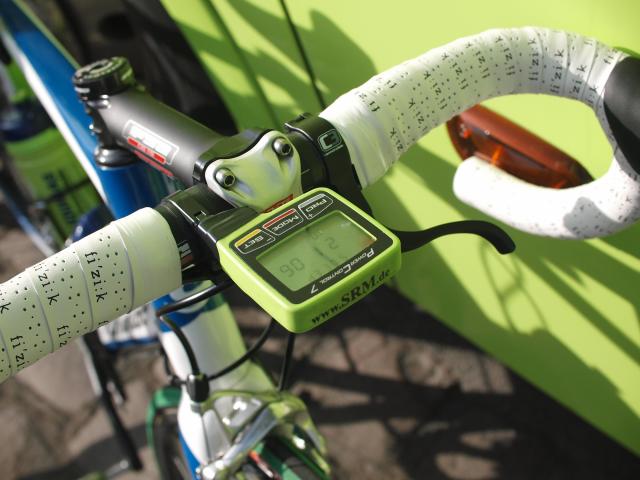 …as are the Speedplay Zero pedals (these are Team Green Titanium)… 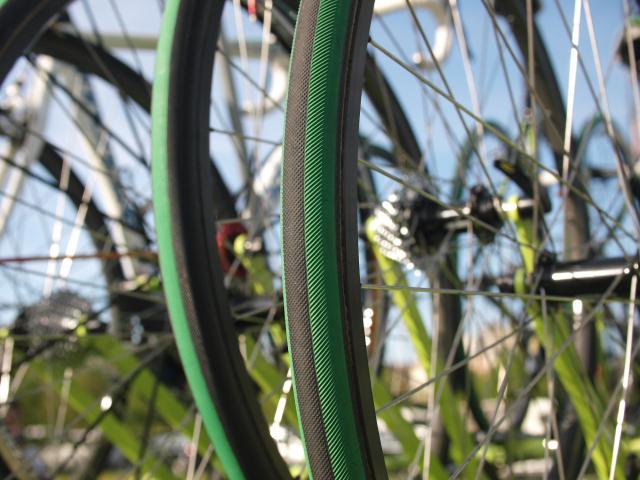