We're not going to be dazzled by its looks come testing time, but for the moment…
by Tony Farrelly

There are black carbon bikes and there are black carbon bikes* but if If bike tests were beauty contests then the new Comtat Aristo would be heading for a perfect score even before we threw a leg over it. They're not though so although its classically restrained looks drew a chorus of appreciative oohs when it emerged from the box those looks won't be influencing us when it comes to the leg throwing over bit of its visit to road.cc towers. 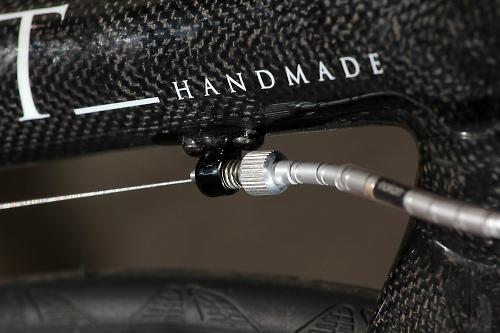 For the moment though we'll allow ourselves a bit of chin stroking and sighing… honestly this is one good looking bike. Possibly it's the thick lustre of the six clear coats of lacquer applied to the beautifully hand laid carbon… yeah okay, all carbon frames are laid up by hand but in this case form and function combine to particularly pleasing effect, well, if you like black carbon bikes they do. Through the lacquer you can see the way the weave changes at the points were the lugs meet the tubes. We like stuff like that. All those coats of lacquer also mean that the Aristo is one beauty whose looks shouldn't fade. 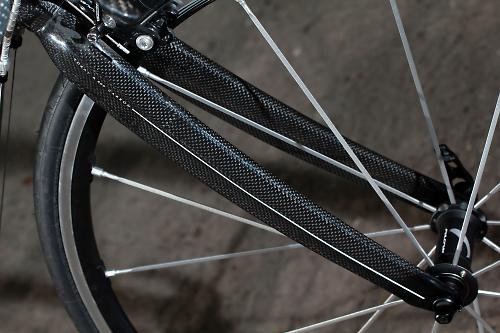 That's probably going to be important to you if you shell out for one because Comtat's 2011 bikes are considerably more expensive than last year's models. That's because Comtat have taken the decision to move their production a few thousand miles west from Taiwan to Italy in search of bespoke boutique quality. For 2011 the London-based outfit have teamed up with the frame building brains behind some of Italy's top high end brands. The result is a two bike range comprising the Aristo and the full custom Sartorial.

Billed as having performance every bit as smooth as its looks the Aristo is designed to be an all day riding bike, but it's also very much a performance machine. Comfort is very much in the mix but geometry is much more towards the racier end of the sportive spectrum and while it doesn't have the full on aggressive stance of an out and out race machine - it's certainly looks like something you'd be happy to race on. 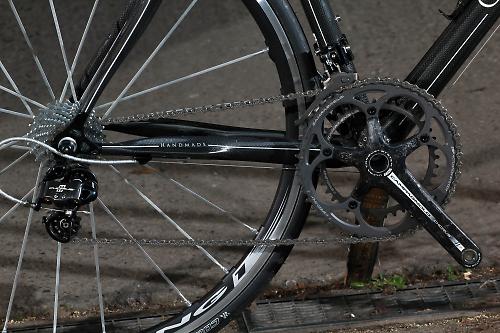 We certainly don't expect Mat to be held back by the weight once he gets it out on the road: our complete bike built up with a full 11-spd Campag Chorus groupset and Fulcrum Racing 1 wheels grazed the road.cc scales at a mere 7.2Kg (15.8lb). The Italian theme continues in the rest of the finishing kit with Deda supplying Presa lightweight carbon bars, Zero stem, and Superzero carbon seat post, while the saddle is Selle Italia's SLR Carbonio. The only non-Italian bits of the bike are the Continental GP 4000 tyres and Comtat's own lightweight carbon bottle cages. That lot will set you back £3200 in its off the peg guise. 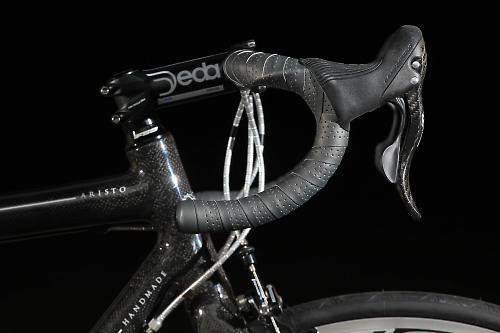 As well as complete bike packages the Aristo is available as a frameset. The standard frameset is yours for £1599.99 (for the sake of saving some pixels let's call it £1600). For an extra hundred you can have the Aristo ISP with integrated seat post and for a penny short of £2000 you can have the custom option with a choice of standard or integrated seat posts and a free fitting session from Velosolutions which must be worth a few bob in its own right - that's where

Mat got fitted for his custom made Viner Maxima. That is competitive pricing for a handmade custom carbon Italian frame. 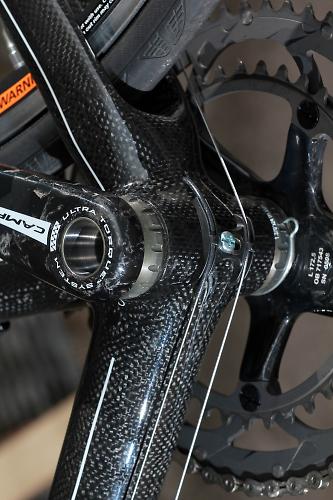 At first sight the frame itself is a pretty classic affair, and for the most part those looks aren't deceptive, there's no fancy dan assymetric head tube here, or BB30 bottom bracket (although that is an option if you opt for the custom route) no a la mode internal cable routing either, although it does come with some classy looking Nokon cables (okay, chalk up another non-Italian component). Tubes are round and construction is lugged – although we aren't talking big old chunky lugs here, instead say Comtat secret Italian skills are deployed in the autoclave where the tubes are bonded together under such pressure that the resin is forced out and the carbon becomes melded together as one hence the change in pattern that can be seen through the laquer at the point where the tubes join – this system sounds similar to the carbon to carbon system used by Trek. 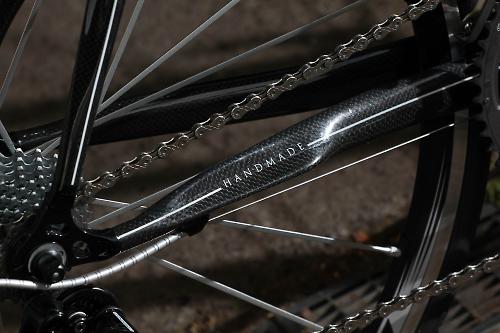 While everything looks suitably restrained and classic up front the rear triangle dares to be different with some beautifully sculpted seat and chainstays which, Comtat tell us, aren't there just to look good. The idea is to add extra control in fast corners to minimise the chances of the back end stepping out to that end the chainstays in particular change profile radically from the mid section to the rear where they flare and flatten horizontally from the rounder front section, not something I can remember seeing before. It sounds like an interesting idea and I'm sure Matthew will enjoy chucking it in to plenty of corners in the coming weeks.

*If black carbon isn't your thing there will also be an anthracite and white version available soon.

1
Near Miss of the Day 485: “You should know better” – 4x4 driver carrying road bikes makes close pass on cyclist
2
Hunt introduces 42mm deep Limitless gravel wheel with the promise of “maximum aerodynamic benefit”
3
Jail for speeding driver who killed cyclist in Norwich
4
Assos releases 2021 Equipe RS winter range based around a £575 jacket
5
Near Miss of the Day 486: Lorry driver cuts across cyclist at roadworks in "terrifying" overtake
6
Ratio has a nifty way to add an extra shift to your 1x11 SRAM mechanical groupset
7
Giro d'Italia zip-gate. Hindley and Kelderman struggle with jacket issues on a freezing Stelvio
8
Canyon set for €500m+ private equity sale?