25 miles on a bike might not seem very far to some of us, but for one little girl it's another part of a long and amazing journey. When Lauren Booth, now nine, contracted bacterial meningitis at the age of just six weeks it left her with brain damage, loss of hearing and cerebal palsy affecting her arm and leg. Doctors feared that she'd never walk or talk, but now she's one of the most talented young cyclists in the country.

Lauren spent three weeks battling the illness and had to be resuscitated during her stay in hospital. At the age of four, and frustrated with her restricted mobility due to her disabilities, she was given a specially adapted mobility tricycle by the Meningitis Trust. 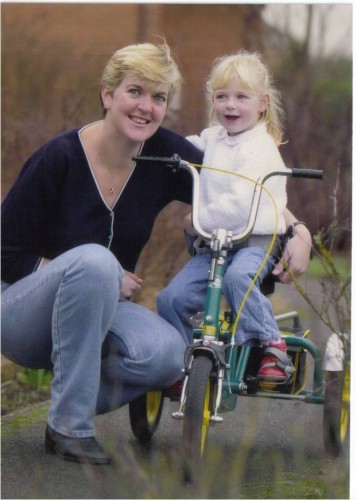 The trike gave her the independence she craved and from that point on she's never looked back. Before long she was defying her medical assessment by learning to ride a normal bike in spite of her balance issues, and in 2008, not satisfied with just riding her bike, she took up racing.

Lauren is now a talented road racer, ranking 4th in 2009 (rider category D) in the British Cycling points table. She's also keen to pursue track riding, and when she turns ten on March 19 she'll be celebrating with a trip to Newport Velodrome. She's been to watch UCI World Cup events a number of times (to cheer on Sir Chris Hoy, who's her hero) and along with her family she's already raised over £17,000 for the Meningitis Trust. Lauren's latest adventure is a 25-mile sponsored ride from her home in Chippenham to the head office of the Trust in Stroud, to celebrate both the Trust's 25th anniversary and her 10th birthday. Lauren says of the ride, “The Meningitis Trust gave me a trike when I was little. I now really love cycling. I hope my ride will be fun and raise lots of money."

If you'd like to support Lauren on her ride, head on over to her Virgin Money Giving page. We at road.cc wish her all the best with her future cycling exploits!