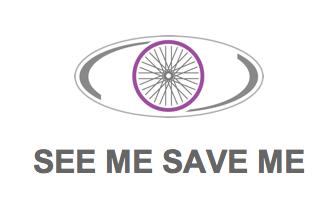 Olympic gold medal winning cyclist Rebecca Romero has lent her support to the See Me Save Me campaign which aims to ensure that heavy goods vehicles  across Europe are fitted with blind spot devices.

The campaign is being led by Kate Cairns whose sister Eilidh died when she was crushed by a tipper truck while riding in London two years ago this month.

Today Kate travelled a with delegation from road safety charity Brake to Strasbourg where the group will lobby MEPs for a change in EU law.

Kate said: “Eilidh’s death has affected more people than we could have imagined; there are so many that loved her. It’s vital that truck visibility is addressed to prevent more needless deaths among cyclists.

"It is outrageous that so many HGVs are allowed to ‘share’ road space with vulnerable users but are not required to have even this simple and low cost safety equipment that is proven to save cyclists’ lives.

Rebecca Romero, added: “It’s tragic so many cyclists lose their lives each year by being hit by commercial vehicles, often as a result of the driver failing to see them – yet many of these tragedies could be prevented by devices fitted to vehicles to reduce blind spots.

"I’m backing Brake’s campaign calling on all commercial vehicle operators to fit devices that help drivers spot people on bikes and on foot.”

Brake campaigns director Julie Townsend said: "While some HGV operators fit devices to make their vehicles as safe as possible, too many trucks pose an unacceptably high risk to people on foot and bicycle.

"We're appealing to all operators to fit the latest technology to reduce blind spots, and we're calling for the law to be tightened up - to help prevent more families going through the devastation of sudden, violent deaths and injuries."

Duncan Pickering, IAM cycling development manager told road.cc: “While any move to improve the safety of cyclists on our roads is a good thing, it is important that we don’t forget that cyclists also have a big part to play in their own safety.

“Prevention is better than cure, and cyclists should never pull up on the nearside of larger vehicles such as HGVs, especially when the larger vehicle is likely to turn left.

"These vehicles have different turning paths to cars, and the cyclist could quickly find themselves running out of space. We also advise cyclists to position themselves at least a metre from the kerb when moving, to improve their visibility to other road users, and to give more space to avoid drain covers and potholes.”