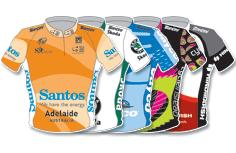 Cameron Meyer of Garmin-Cervélo is the new leader of the Santos Tour Down Under after today’s Stage 4 from Norwood to Strathalbyn, opening up a ten-second gap on his closest rival that, with just two stages to come, may well be enough to secure him the overall victory.

Meyer, who is a multiple World and Commonwealth Champion on the track, today showed his prowess on the road as he pulled off a stunning win, proving the strongest of a six-man breakaway that managed to keep ahead of the chasing peloton as the race encountered windy conditions as it approached the finish.

The chasing peloton, containing all the riders who started the day at the top of the general classification, and led by race leader Matt Goss, came home 24 seconds after Meyer, who now tops the overall standings, ten seconds ahead of ten Dam, with Goss relegated to third, 12 seconds down on his fellow Australian.

Meanwhile Meyer, who started the day in 46th place, 21 seconds behind Goss, was catapulted to the top of the standings, and his stage win today continues the remarkable run of victories by young riders in this year’s race, despite the efforts of experienced pros like Robbie McEwen to get a stage win.

Having celebrated his 23rd birthday earlier this month, the Garmin-Cervélo rider is two months younger than Team Sky’s Ben Swift, 23 in November, winner of Stage 2. Yesterday’s winner, Michael Matthews, is just 20, while former race leader Goss, who won the opening stage of the race, is the oldest of the quartet at 24.

After today's stage, Meyer, who comes from Western Australia and was recently named Australian Cyclist of the Year for 2010, said: "It's a little bit of a shock I guess to pull off a stage in the Tour, it's obviously renowned for the sprinters. It's a shock to have the jersey, but I'm thrilled.

"Our plan today was to put a couple in the break," he continued. "Matt Wilson in the break with me was just unbelievable, I mean I wouldn't have stayed away without him, so it was just the perfect ride and I'm very happy to take my first ProTour (WorldTour) victory.

"Today, to get the stage win was the first thing I thought about, as (yesterday) I missed the split by seven seconds and lost a little bit on GC (general classification)," continued the Garmin-Cervelo rider, who was still nursing cuts and abrasions after crashing on yesterday's Stage 3.

"So I thought it's going to be hard to get that back, so to get the stage victory and throw my hands in the air over the finish line, it was just a great feeling," he added.

Referring to his escape with team mate Wilson and four other riders, Meyer said: "It was definitely hard, (but) we played it so beautifully in the breakaway, we just made sure we saved our energy until the last 30 kms and we really drove it. I don't think we would've stayed away without Matt out there, he really saved my legs a little bit and drove it in the last kilometre.

"It gave me a free run to have a go at the sprint and in the end I had the legs on the day."

"We thought 'the peloton can bring it back whenever they want' so we waited until about 20-30km to go and then we really hit the gas. And when we went, we went strong.

"It's good for me, I like to get out there time trialling in my own rhythm and it was a really hard finish, after you have to swap off and then sprint, it really suited me," he continued adding that he is hopeful of retaining the overall lead.

"It's going to be a bit nerve-wracking, obviously it's my first time leading a tour in the professional ranks and especially a ProTour (WorldTour) race.

"I will take confidence from the ride I did in Wilunga last year and hopefully I can put in a good performance and have that extra special motivation with this jersey on my shoulders."

De Gendt, who won the Hindmarsh Most Aggressive Rider prize for the stage, now leads Goss in the Jayco sprints competition by four points.

"I am little disappointed that we didn't win, but I'm also happy that I have second place," said the Belgian." (But) it's very early in the season for me, so it's good that I have this good result.

"I will still try to win a stage and try to get again in the breakaway for the sprint jersey, I want to keep the jersey," he added.

Goss, meanwhile, was downcast at having lost the overall lead."Everyone just misjudged it at the finish a bit and it was all downhill from there," he reflected. "But we knew that we had to catch them before the top but we just didn't ride fast enough.

"I don't think we had enough support from the other teams, as we're not the only ones who have goals for the overall, but, unfortunately today we lost time to some of those guys at the front and lost the jersey," he added.

Sunday’s Stage 6 follows 20 laps of a flat circuit in Adelaide, and is unlikely to see any time gaps open up, with a bunch finish in prospect. That leaves tomorrow’s 131 kilometre Stage 5 from McLaren Vale to Wilunga as the last realistic chance for anyone to overhaul Meyer.

With the peloton tackling the testing Wilunga Hill twice in the final 32 kilometres, there may be an opportunity for an attack to get away, but Meyer, who will no doubt watch his rivals closely, must now be favourite to become the first home winner of the race since Allan Davis in 2009.