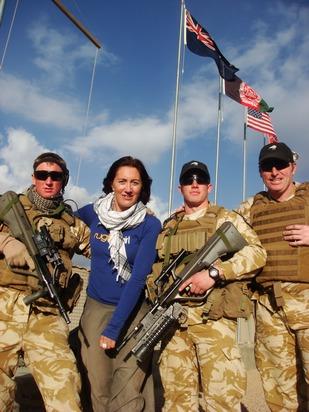 Flightless Kiwi forgoes plane to bike it home... from London

36-year-old woman's epic return trip takes her through some of world's most dangerous places...
by Simon_MacMichael

Proving the adage, as one of her Facebook friends put it, that "Kiwi birds don't fly," a woman from New Zealand decided to forgo the plane to take the scenic route home from London, cycling for 20 months on a cheap mountain bike and travelling through some of the world’s most dangerous regions.

Kylie Phaup-Stephens' travels on her 18-speed bike, nicknamed “Tankini” because “it’s a tank” took her through 22 countries including Iran and Afghanistan and the cycling Kiwi is now on course to return home to Christchurch in time for Christmas, reports the NZ Herald.

The traveller, whose adventures are recounted on her blog and who survived on the equivalent of around £3.50 a day, meaning that she had to get by on one meal every 24 hours, reports that the high spot of her trip was when she turned up, apparently unannounced and very much unexpected, at a New Zealand army base in Afghanistan.

“I rocked up to the New Zealand Army base and the guys were like 'what the hell are you doing here?' I can't tell you how good it was just to see other New Zealanders. It was the highlight of my trip," she explained.

The low point came in Iran, where she says men tried to get into her tent, and at an unspecified hotel, where the manager got into the shower with her.

Culinary 'highlights' of the trip included eating camel, dog and rats, but the 36-year-old got a boost from the kindness of strangers, saying, "If I came across people who were really nice and wanted me to stay, I would. The only thing pushing me for time were my visas."

"So many families just took me in and fed me and just wanted to talk to me. There were so many other good things that happened as well. There's far more good people in the world than there are bad."

However, she found some countries particularly difficult from a cyclist’s point of view, getting knocked off her bike on three occasions in a single day in Java, Indonesia, while riding in China proved to be especially “tough and hideous” due to "smoking and spitting and pollution" and poor roads.

But, she says, “There's nothing you can do but get back on and keep riding."

By the time she got to Australia, Ms Phaup-Stephens, who believes she has cycled around 50,000 kilometres - from the details of the journey, it doesn't sound as though she took the most direct route - had around £40 left and had to resort to asking supermarket staff for food that otherwise would have been thrown out, confessing, “There were a few times in Queensland that I was eating out of rubbish bins."

After waiting five months for a passage back to New Zealand – time she put to good use by cycling from Australia’s northernmost point to its southernmost tip – the cyclist, who admits to still getting “a sore bum every day from biking" is due to arrive in her native country this week.

Once home, and influenced by her experiences in Afghanistan and East Timor, where she spent Anzac Day with Kiwi troops, Ms Phaup-Stephens plans to join the army, but she denies that there is anything extraordinary about her, saying: "There's nothing special about me. I'm just average, really.

"I just happened to like travelling and just got on a bike and rode home. I'm just an average Kiwi girl. That's all there is. I just struggle to think that I've inspired anyone."

Following our story, Ms Phaup-Stephens got in touch to clarify a couple of points in the original report and also to give a bit more background on her epic adventure. Here's what she told us:

"It really WAS the most direct route I could find!

"The detour (backtrack) into Afghanistan was completely unplanned. My Indian visa expired by the time I entered the country so I was forced to go back into Pakistan, and to get a new Indian Visa. To obtain an Afghani visa was quite easy!

"I emailed the NZ Army about a week before I entered the country (literally got on their website and hit the Contact Me button down the bottom)....they knew I was on my way and in the area, it was just the boys on the gate that were quite shocked to see me!
I'd left behind a nice guy in the UK, a Kiwi bloke that had served in the NZ Army in Afghan - he's since transferred into the British Army. I'd seen pics of the area where the NZ Army are based - a far safer area than where the British, American and stralian troops are located. Bamian is nicknamed 'the shire'.

"The land borders are still closed to Myanmar - impossible to cycle through, hence the northern direction up through Tibet and down  China, except again, I was unable to cycle, unless I was prepared to pay $100USD a day for a government official tour guide to cycle with me! Just couldn't afford this.

"Five months in Indonesia looking for a boat through to Australia.

"Five months in Australia looking for a boat across the ditch to New Zealand, home.

"I'm still not done yet..... have to get to the other end of the country, Christchurch.
It's Mum's driveway I'm dreaming about!"

It certainly sounds like the adventure of a lifetime, and we wish Kylie the best of luck for the rest of it.