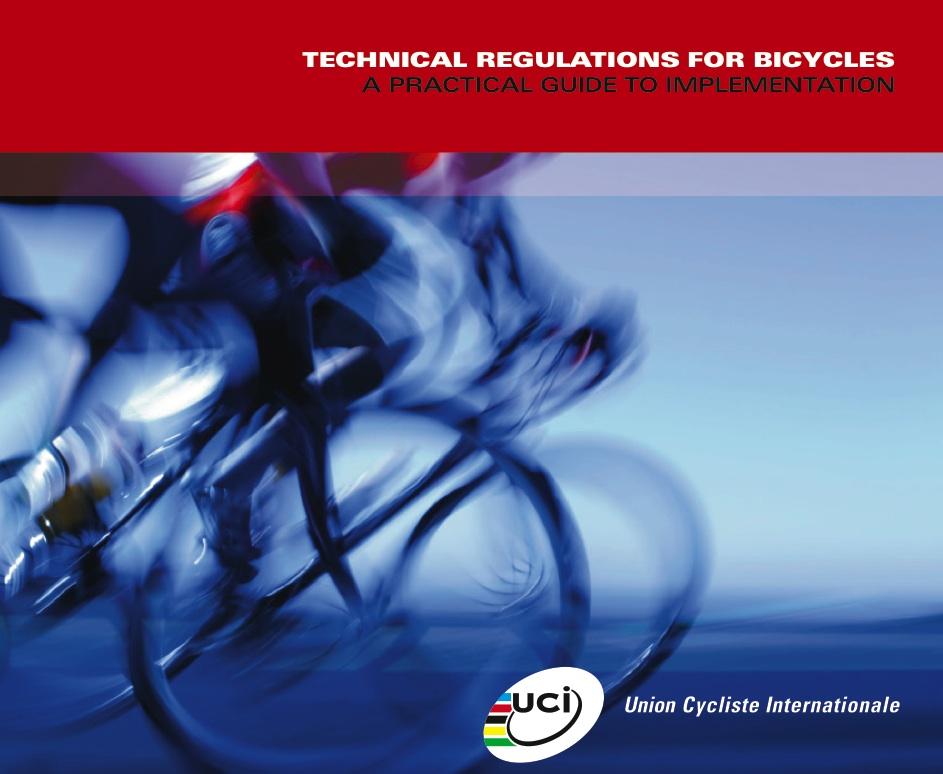 The bike industry is reacting to the new approval procedure for race bike frames and forks set up by the International Cycling Union (UCI), cycle sport's world governing body, and it’s fair to say that there’s a mix of nervousness and incredulity.

One source has claimed, “The UCI is out of their collective mind. I could never imagine that a governing body could be so disrespectful.”

The approval procedure, which comes into force on 1 January, will result in new frames and forks getting a label to say that they comply with the UCI's equipment regulations... or not. A list of approved products for use in road, track and cyclocross events will be published on the UCI’s website.

The UCI announced at the Eurobike tradeshow back in September that they would be forming a technical commission to approve race equipment. But a press release earlier this month stating that the new approval process for frames and forks would come into force on 1 January has taken many by surprise.

“The UCI sent out this press release without ever discussing the new system with the bike industry or the World Federation of the Sporting Goods Industry (WFSGI), the group the UCI asked to help them work with the bike industry,” said the head of one major cycling manufacturer, who does not wish to be named.

“The UCI are proposing that we, meaning all companies supplying bikes to teams competing in UCI-sanctioned events, have four weeks (two of them holiday weeks) to get approval and then buy stickers to apply to all the bikes.”

Other bike industry sources are still unsure of the effects the new approval procedure will have.

"We’re still working through what this new approval process means," said Chris Garrison of Trek. "The product guys have been going through it, but it’s not entirely clear what is going to be expected of us. Since we do develop our own methods for working with carbon and advancing what can be done with it, it probably will have some impact on us. We just don’t know what that is at the moment."

Another industry source who doesn't wish to be named said, "I have a feeling of dread! We are pretty small and I'm really not sure how I will cope with the extra workload I can see this causing. Just keeping up with designing frames is hard enough."

The UCI haven’t done much to clarify the situation, although they do say that they will publish the new approval protocol “shortly”.

It is only “new models of frames and forks still at the conception stages on 1st January 2011 [that] will be subjected to the new approval procedure,” according to a new statement from the UCI.

The UCI statement adds, “Models produced in 2009 and 2010 will be able to obtain backdated approval.”

Why would manufacturers want to get backdated approval for a product? To clarify that it’s race legal in order to set the minds of teams and potential buyers at rest. It is worth pointing out that a bike only needs to be UCI legal if it is being raced in a UCI accredited event. However, one of the other stipulations of the UCI Technical Regulations is that all bikes are models that can be bought, so there are unlikely to be UCI-compliant specials while the rest of us get to benefit from the latest technology. That's the way it looks on paper at least.

The new approval procedure will be implemented in collaboration with the Swiss Ecole Polytechnique Fédérale de Lausanne (EPFL), and it will eventually be set up for wheels, handlebars, seating and clothing, although the UCI have not announced a timescale on that. They tell us that they're working on these further approval systems but it's too soon to give dates on their implementation.

What are the benefits of the new frame and forks approval system? The UCI list six advantages. Here they are in full:

Equipment rules are set out in chapter 3 of the UCI’s regulations and they’ve been enforced more rigidly over the past couple of years. The approval system is seen as a means of uniformly applying these regulations, rather than leaving it up to individual race commissaires.

The equipment regulation that has been in the news most often recently is on frame structure (1.3.024, if you want to check it out). Essentially, it says that the profile of any frame tube, like other equipment including handlebars, must have a length:width ratio no greater than 3:1. It can't be more than three times as deep as it is wide.

Time trial bikes and track bikes are the types of machine that have over the past few years had the most difficulty complying with UCI regs – the UCI seems to have had particular difficulty deciding if particular TT bikes are legal or not. Indeed, their own TT world championship was won in 2009 on a bike that was subsequently deemed not to comply with the Technical Regulations.

While the UCI can list six benefits for their new approval process, there is one big drawback for those of us who ride bikes rather than race them – namely that the new regulations will kill technical innovation that will benefit many in the interests of sporting purity which will benefit… the UCI, presumably, as no doubt manufacturers will have to pay something towards the cost of getting their equipment approved.

One factor that may or may not prove significant is the identity of the man headling up the approval process, Prof Jan Anders Manson, vice president of the EPFL. Professor Manson is a composites expert who fulfils a similar role for the world swimming body heading up their technical approvals process. FINA last year banned non-textile swimsuits on the grounds that they were "performance enhancing" so it is probably safe to say he isn't a big fan of technical innovations when it comes to sporting equipment.

Leaving notions of sporting purity aside, the latest UCI move on technical regulations could be seen as a move by the organisation to insert itself into the retail process and to claim a slice of an industry that has seen massive growth around the world – in much the same way that the organisation has made so far unsuccessful attempts to control major races. Interestingly, the UCI has also signalled its intention to get involved with approving cycle clothing too.

Go here for a complete list of the UCI’s regulations.