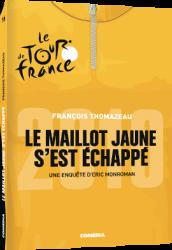 If, like us, you’ve ever despaired of fulfilling a childhood ambition of playing a central role in the Tour de France, think again. Released in time for Christmas, a personalised novel officially sanctioned by Tour organisers ASO allows you to play a central role in a mystery surrounding the 2010 edition of the race.

Costing €39.90, the  book is available only in French, and when ordering you are asked to provide details of the main character, who can be male or female but must be aged at least 15 years, as well as a secondary character who can be the partner or a friend of the hero. The book is then printed, putting them at the centre of the action.

According to the marketing blurb, the action revolves around “The first mountain stage of the Tour de France 2010. You are invited by the maillot jaune to follow the stage. Your motorcycle crashes on the Col du Ramaz at the moment the French leader sets off in pursuit of two escapees. When you come round, there’s astonishment on the Tour – the maillot jaune has vanished into thin air!”

A bit far-fetched, perhaps, even bearing in mind the sometimes patchy TV coverage in the mountains, but possibly a safer and less controversial plot line to follow compared to dodgy steaks and slipping chains.

Publishers monroman.com that the book, which also comes with a personalised cover containing a photo of the hero plus the co-author – we assume that means the person ordering it – provides “A behind the scenes investigation into the Tour de France 2010 – your hero will play the role of investigator and chief suspect.”

Before you get too carried away with the notion that it might be fun to have the book published with yourself as the main character and someone such as UCI president Pat McQuaid in the main supporting role, we feel we should add a note of caution – the book contains a “Scène érotique optionnelle.”

Whatever your level of French, we’re pretty sure that phrase needs no translation.