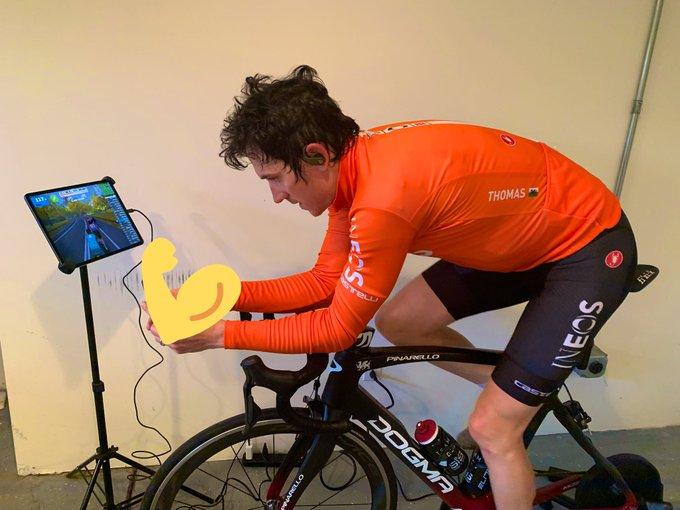 How are top pro cyclists coping with enforced coronavirus break?

Training on Zwift, taking time to reflect on small but important things in life, or going home to family - here's our round-up...
by Simon_MacMichael

COVID-19, better known as coronavirus, has among other things seen the sporting calendar quite rightly put on hold, with public health considerations and easing pressure on emergency services the priority. But, with many pro cyclists having the Spring Classics as their big goals of the year, and Grand Tour riders looking to use the block of one-day races as part of their preparations for their targets later in the year, how have they been coping with the enforced break from competition to try and ensure they stay in peak condition for when racing resumes? We’ve taken a look at some of their social media feeds to find out.

This weekend should have seen the conclusion of Paris-Nice and Tirreno-Adriatico heading into its closing days ahead of the first Monument of the year, Milan-San Remo, while the northern Classics season should have been building up towards two of the most eagerly awaited races on the calendar, the Tour of Flanders and Paris-Roubaix.

And while no-one can predict when competition will start again, we suspect it will take longer than some race organisers would optimistically have us believe; it’s probably not a coincidence that it many pro cycling teams, which have the primary duty of care towards their athletes, took the unilateral decision to withdraw from competition, before government restrictions in a number of countries left organisers with no option but to cancel or postpone events.

Unsurprisingly, the online virtual cycling platform Zwift has been the go-to choice for many – and is giving amateur cyclists an opportunity to ride alongside some of the biggest names in the sport.

Geraint Thomas, 2018 Tour de France champion (and, you may recall from TV adverts during last year’s edition of the race, a Zwift ambassador) is among them, this weekend inviting fellow Zwifters to join him on the roads of Watopia.

No racing for a while so I’m saddling up in the Tour of Watopia again tonight… Group B at 5pm GMT / 6pm CET on @gozwift – see you there! pic.twitter.com/Ow8kGnWNbw

When the Tuscan one-day race Strade Bianche, due to have been raced last weekend, was cancelled as the crisis escalated in Italy, Mitchelton-Scott had its riders – including the winner of the women’s race last year, and now world road champion Annemiek van Vleuten – taking part in an online Zwift session along with 1,200 other cyclists.

Pretty cool to ride with 1200 Zwifters this morning. Had a cool intro to @GoZwift with help from @lvanbon First ride on my @tacx smart trainer was great experience, could even feel also the wooden bridge & gravel. Had fans from South Africa, Colombia and NL next to me today 😍. pic.twitter.com/8mkpoSH6bl

Team Ineos, when it announced the week before last that it was withdrawing from competition temporarily, also cited the shock death of sports director Nicolas Portal as one of its reasons for ceasing racing, and that, as well as coronavirus, is an issue that Thomas and team-mate Luke Rowe discuss in the latest edition of their Watts Occurring podcast. You can listen to it here.

In our latest pod we pay tribute to Nico. We will miss you mate.

Fellow Team Ineos rider Chris Froome, of course, is looking to get back to full fitness ahead of potentially challenging for a record-equalling fifth Tour de France title this summer. He’s back in South Africa training right now and – like many of us, at a guess – also finding time to reflect on some of life’s little wonders we often take for granted.

Take a moment to appreciate the little things 🦋 pic.twitter.com/NOwEvATsDo

It seems a long time ago now that we were congratulating Mathieu van der Poel on winning his third cyclo-cross world championship and looking forward to what he might achieve in the Classics this year.

The Dutchman was set to return to racing after a bout of the flu, but in an interview with Het Nieuwsblad, reported by CyclingPub.com, shared his thoughts on the current situation.

“The waiting is scary,” said the Alpecin-Fenix rider. “That’s the hardest part; the complete uncertainty. All I know is that I’ll be on my bike tomorrow and that will be over hours later. But why? What for? Do you know?

“Of course all these cancellations are a huge disappointment, but in the end that is the only way to go. There are currently bigger problems in the world.”

He added: “It would be difficult for some riders. In some ways I’m lucky; because of my illness I can use all the training to lay a foundation again. That’s what I’m going to do in the following days; put in some hours, train, keep myself fit.”

Meanwhile, his cyclo-cross rival Wout van Aert, another of the sport’s biggest prospects on the road, who was racing at Paris-Nice with Jumbo-Visma, yesterday expressed what surely must be the thoughts of many within the sport.

I am always happy to come home, but I’ve never felt this relief after arriving back in Belgium, close to my family. Crazy and scary times... #Corona #StaySafe