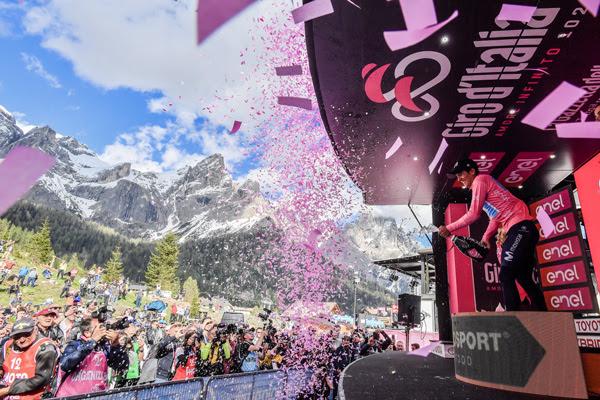 Governing body's chief speaks as Italy and France step up measures to try and contain coronavirus outbreak...
by Simon_MacMichael

UCI president David Lappartient says that cancelling the Giro d’Italia and Tour de France would be a “disaster for our sport” as the countries that host two of cycling’s three Grand Tours step up measures to try and halt the spread of coronavirus.

Italy, to date the worst-affected country in Europe by the outbreak with 463 deaths from 9,172 cases according to the latest figures, this morning went into total lockdown, with all sporting events banned until at least 3 April.

The spring racing programme, including Strade Bianche, Tirreno Adriatico and Milan-San Remo, had already been cancelled, and with the latest measures due to lift just six weeks before the Giro is due to begin, any extension to them would put the race in serious doubt.

France, where 21 people have died from coronavirus so far, has banned gatherings of more than 1,000 people, although racing continuous, with Stage 3 of Paris-Nice under way at the time of writing.

Spectators are not allowed within 100 metres of the stage start, extended to 300 metres for the finish, due to the new measures introduced yesterday.

Speaking to Reuters, Lappartient said that it “would be a disaster for our sport of course if we can't have the Giro D'Italia or the Tour de France.

“Maybe the gap of two months in between [the two races] will have also some consequences on the virus. Maybe in summer we hope so, that it will after the summit of the peak, decrease.

“So we hope that these races will be able to take place. But we are, due to the situation in Italy, a little more worried today with the situation with the Giro d'Italia.

“We know what the decision from the Italian government is until April 3, but who knows what will be the situation after. So there is a potential risk that the Giro can be cancelled.”

Paris-Nice ends on Sunday in the Cote d’Azur city just 40 kilometres from the Italian border, and Lappartient said that the UCI is in daily contact with organisers ASO about any additional measures that might have to be taken, such as excluding spectators altogether.

He also accepted that there was a risk that the race might have to be cancelled altogether, adding, “We have to follow the situation with the virus and take the best decision at the moment.”

The Giro d’Italia is due to start in the Hungarian capital, Budapest, on Saturday 9 May, ending in Milan – capital of Lombardy, the worst-hit region in Italy – on Sunday 31 May.

But with the number of cases, and deaths – now recorded in all regions of the country – continuing to rise daily – it is impossible to predict if or when the peak of the outbreak might be reached, and when life may start returning to normality.

Yesterday evening, Italian Prime Minister Giuseppe Conti said: “The figures show we are experiencing a serious increase in infections, an increase in people infected in intensive care – and an increase, unfortunately in deaths.

Speaking last week, Mauro Vegni of Giro d’Italia organisers RCS Sport said that cancelling the race “would create a very complicate situation not only for cycling and sport, but for the entire country.

“I don’t even want to think about such a prospect. The damage would be truly immense in that case.”

1
Top American gravel racer shot dead in Texas
2
What happens if you put a giant propeller on a bike? Plus new stuff from Rapha, Campagnolo, Ritchey, Selle Italia, Lezyne + more
3
Near Miss of the Day 769: Punishment pass
4
Cyclist caught urinating at war memorial garden
5
James May: “I can’t stand road sectarianism – it’s all b*llocks”
6
Cornwall Council to review “disaster” cycle paths scheme
7
Near Miss of the Day 767: MGIF driver cuts across cyclist at speed on roundabout
8
“Maybe the easiest race I’ve ever done”: Pros enjoy relaxing Giro d’Italia stage six… but could you have kept up?