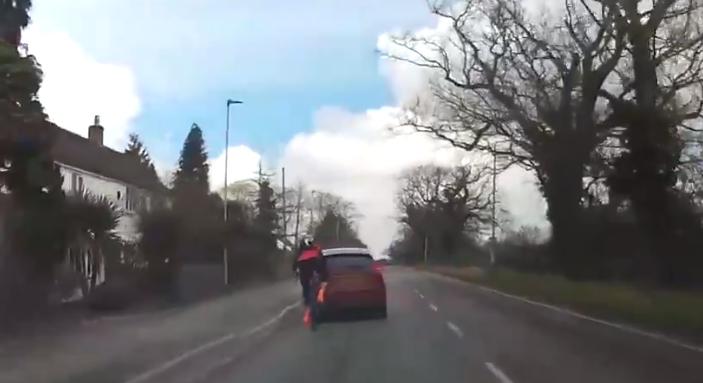 A driver who almost made a cyclist fall off his bike by deliberately swerving their vehicle towards him has been banned from driving for 12 months. Social media users have criticised the sentence for being too lenient, and have also drawn comparisons with cases where an assault is carried out with a weapon such as a knife or baseball bat, rather than a motor vehicle.

Footage of the shocking incident, recorded on the dashcam of a following vehicle, was posted to Twitter yesterday by Norfolk Police.

How do you treat other road users? This incident resulted in a one year driving ban... #ShareTheRoad #ClosePass 🚲🚗 pic.twitter.com/2Ci0HaSFQD

Initially, it seemed that the driver was going to pass the cyclist leaving him plenty of room, but then slowed down before veering sharply to the left.

It is unclear whether contact was made, but the cyclist did have to brake as well as turning to the left to avoid being knocked off his bike.

It appears that the motorist may have been angry that the cyclist was not using a shared-use path alongside the carriageway, even though there is no obligation to do so and debris, poor surfaces and frequent side roads and driveways, often concealed, make many unusable.

Especially for a cyclist travelling at speed on a road bike, as the one involved in this incident was, it is safer both for the rider and pedestrians to ride on the main carriageway.

In captions to the video on the tweet, Norfolk Police said: “Rules of the road say that drivers should give cyclists as least as much space as vehicles when overtaking.

“The incident resulted in a charge of dangerous driving. The driver received a 12-month driving ban and a fine of over £300.”

They added: “Did you know? The Highway Code says that the use of cycle lanes is not compulsory and will depend on your experience and skills.”

The post included the hashtags, #ShareTheRoad and #ClosePass, although many people commenting on it pointed out that far from the latter, this was more a case of deliberate assault.

Many Twitter users also criticised the leniency of the sentence as well as drawing a distinction between how people using weapons such as knives or baseball bats are treated by the criminal justice system compared to those using cars, with the following tweet being a typical reply.

Only a 12 month ban? Only £300? If they had used *any other kind of weapon* they would have received a prison sentence. Somehow it doesn't feel like justice