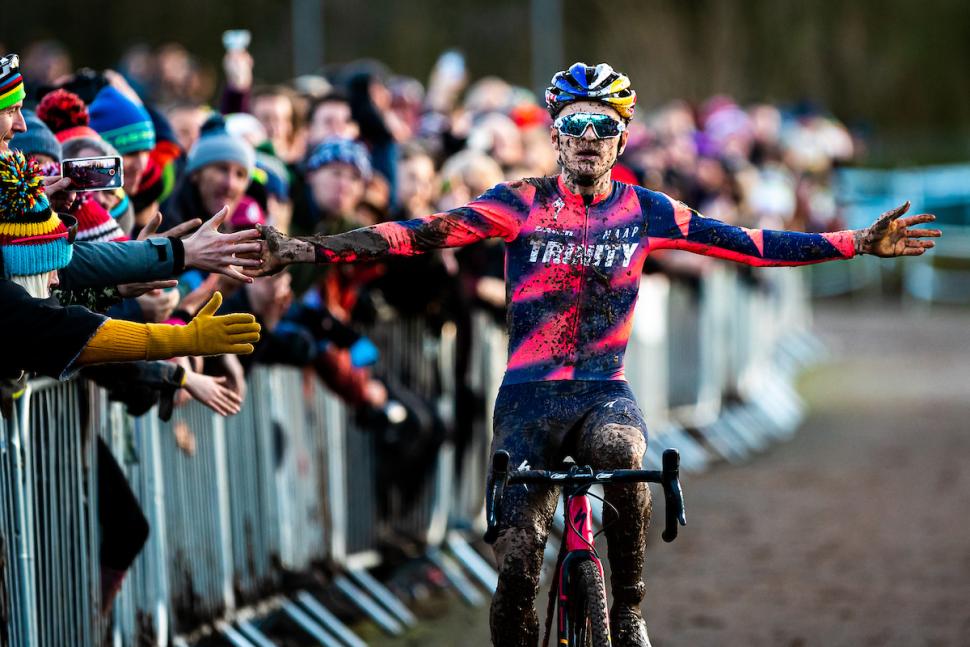 Defending men’s champion Pidcock had to overcome a series of setbacks during the opening lap, but after recovering to hit the front of the race, he pulled away for an emphatic win.

With Pidcock ineligible for the Under-23 category because he races at elite level internationally, Tulett won the national jersey in that age group.

Following the race Pidcock, who has eight podium positions from races in Belgium this season but is waiting for his first elite victory there, said: “I was feeling pretty strong, going full gas and seeing where my level was at.

“The first lap was a bit rubbish to be fair – I hit a pole twice and fell over once, and Thomas (Mein) went into the back of me twice.

“I just wanted to go full gas, so I was rushing in the first lap, and probably not composed enough, but once I got the gap I was finding the lines.”

The woman’s elite race was certain to see a new champion, with Helen Wyman and Nikki Brammeier, who between them have won the past 14 editions, both now retired from racing.

Harnden – twice a junior national champion in the event and confirmed in recent days as riding for Trek Factory Racing in enduro events in 2020, but still riding cyclo-cross for T-Mo Racing – started hard, started strongly today but was caught by two-time bronze medallist Beth Crumpton on the final lap.

However, she held off the Tarteletto-Isorex rider’s challenge to take both the elite and Under-23 titles, with Anna Kay of Experza Pro CX – runner-up to Brammeier 12 months ago – finishing third. “I think I went off a little too fast – I was a bit excited,” Harnden said. I was very nervous for this race; there are a lot of good riders in the UK, so it’s tough competition, and I got a bit tired when Beth caught me up, but I just found a bit of energy at the end.

“She was much stronger at the running than me, and whenever we ran she’d come flying past me, but in the woods I was slightly faster, and I knew if I went into the woods first on the last lap I could open enough of a gap to get me to the finish.”

“I’m absolutely gobsmacked,” she added. “This is something I always dreamed of doing, but not now, not this young!”