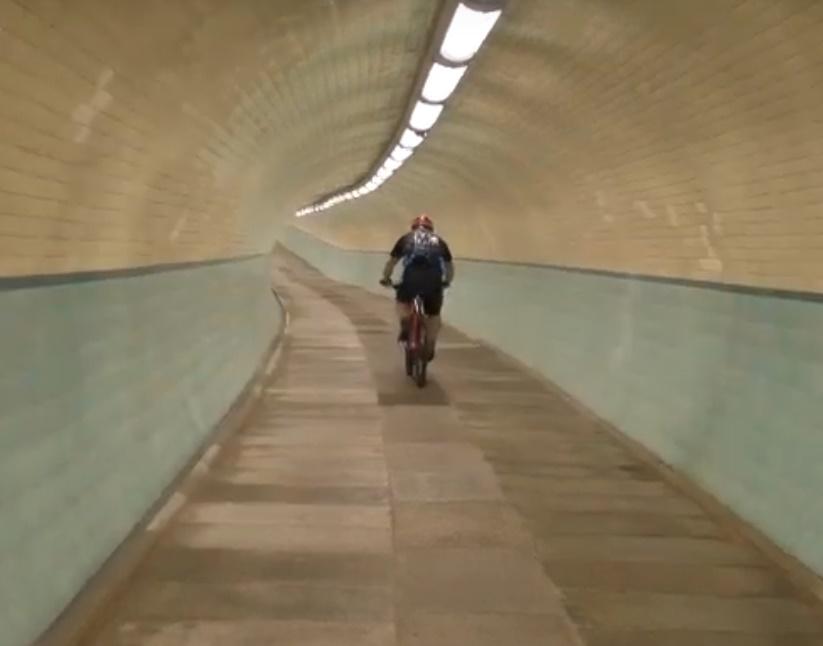 Over 10,000 cyclists used Tyne Tunnels in first two months after they reopened

Tunnels were used by 20,000 people a day in their heyday
by Alex Bowden

The Tyne Pedestrian and Cyclist Tunnels reopened in August after six years of work. Official figures have revealed that they were then used by over 10,000 cyclists in September and October.

The side-by-side pedestrian and cyclist tunnels together comprise a Grade II listed structure. They were closed in 2013 and refurbished at an estimated cost of £16m.

Two wooden escalators were retained at either end of the tunnel, but they are no longer operational. Glass-sided inclined lifts are being added to replace them. Each lift will be able to take up to six people with bikes.

A spokesperson from the North East Joint Transport Committee, which is responsible for the tunnel, said: “Due to ongoing issues with the commissioning of the inclined lifts, they are not yet in operation.”

It is hoped they will open later this month.

The tunnels’ principal engineer Alastair Swan said: “It is invaluable to now have accurate figures to help us measure the social return on the investment of the Joint Transport Committee in restoring the tunnels and keeping open this vital, green link across the Tyne.”

The tunnels are said to have been used by around 20,000 people a day in the 1950s when workers would walk and cycle to the factories and shipyards lining the Tyne.

Swan said: “Those industries are long gone and we don’t expect to see those kinds of numbers again.

“But cycling is once again becoming an option for commuters. We know, for example, that workers at Nissan in the south and Cobalt Business Park in the north cycle through the free-to-use tunnels to work.

“The rise of cycling for leisure and the investment by North Tyneside and South Tyneside Councils in improving cycleways connecting to the tunnels, mean there now is a whole new market out there.”