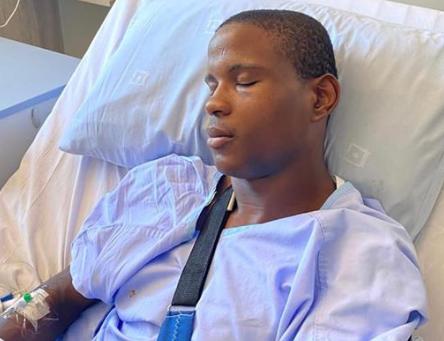 NTT Pro Cycling rider does not know when he will be back riding; major law firm is acting for him
by Simon_MacMichael

Nic ​Dlamini, the NTT Pro Cycling rider whose arm was broken during an altercation with South African National Parks (SANParks) staff when he was on a training ride on Friday says he does not know when he will be back on his bike, and that a major international law firm is acting for him in connection with the incident.

The update on the injury the 24-year-old sustained on Friday on Table Mountain, above Cape Town, was made by Dlamini in a post on Facebook, and coincides with SANParks confirming that five park rangers have been suspended over the incident.

Footage of the incident went viral on Twitter, with Donovan Le Cok, who filmed it, saying that Dlamini had crashed when six rangers tried to prevent him from leaving the park.

On Friday, SANParks had claimed that the cyclist had been stopped because he was allegedly riding in the park without a permit, adding that he had “injured himself” as he resisted arrest.

Le Cok said that the rangers’ intervention caused Dlamini “to crash and hurt himself. Nic got up and was confronted by a senior ranger."

He continued: "The large senior ranger laid into Nic, who is a skinny small guy. Then turned him around and twisted his arm until it snapped. It was audibly loud and Nic screamed. Nic kept shouting 'my arm is broken, my arm is broken!' The officials then proceeded to throw Nic into the back of the van.”

Dlamini, who had planned to start his season at the Tour Down Under next month, took to Facebook today to thank well-wishers for their support and give an update on his condition.

“Many thanks for the huge number of kind messages following recent events,” he said. “I am overwhelmed by the support offered by everyone at home and around the world, especially from the world of cycling. This has been an extremely upsetting experience and your support means a lot to me.

“My first step was to undergo surgery and I am told that this went well, but the surgeon is unable to make a prognosis at this early stage. So, for the moment, I am unable to say when I’ll be back on a bike. My surgeon and the care team will be liaising with the NTT team doctor to establish this.

“For now, I need to receive expert care and physio at hospital or rest at home until I’m well enough to leave and make a statement to the police. I am not sure yet when this will be, but for now things are a little uncomfortable and I am still coming to terms with what happened.”

Dlamini revealed that he is looking at taking legal action in connection with the incident, with one of the world’s biggest law firms acting on his behalf.

“I will be represented by the international law firm Norton Rose Fulbright following this terrible incident,” he explained. “Norton Rose Fulbright have enormous experience in dealing with contentious issues such as this and are currently dealing with Caster Semenya’s case against the IAAF. Our thanks for the many numerous offers for legal representation from concerned people willing to help me."

He added: “Lastly, with the help from my fantastic support team, my manager and the guys at NTT, I will be taking legal advice on the next steps from Norton Rose Fulbright, and for this reason I hope you can understand why I cannot give any more detail to anyone at this stage. I look forward to giving you more detail as soon as I can.”

Meanwhile, a spokesman for SANParks today confirmed that five park rangers had been suspended in connection with the incident.

He said: “We can confirm that the five rangers that were involved in an altercation with Nic Dlamini have now been suspended after they submitted their representations.

"We found it necessary to suspend them and the necessary process will now unfold in terms of them being interviewed by the independent investigator that has been appointed and they will also be given an opportunity to appeal the suspensions."