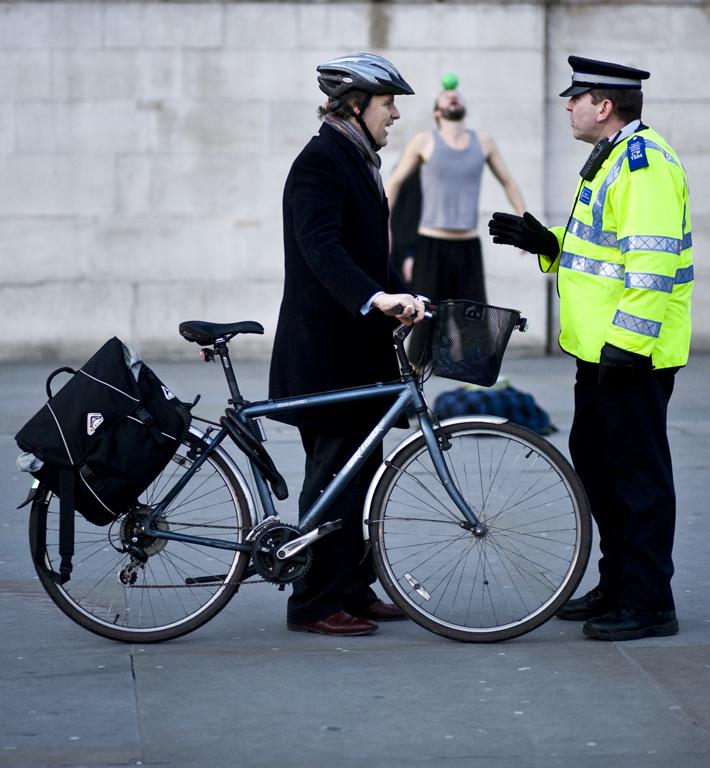 Cyclists receive 91 per cent of tickets on London commuting corridor

Police accused of "disproportionate" focus on people cycling on Cycleway 2, which runs along a busy dual carriageway, after a Freedom of Information request response...
by Laura Laker

People cycling were on the receiving end of 91 per cent of tickets by the Metropolitan Police on a major cycleway corridor into London, a Freedom of Information (FOI) request has revealed – despite the fact 90 per cent of casualties on the route the previous year involved motor vehicles.

According to the Metropolitan Police response to an FOI, of 697 road offence tickets given by police this year on Cycleway 2 (CS2), a 3.8-mile kerb-protected cycleway along a busy dual carriageway from Stratford to Aldgate in East London, 636 were to people cycling while “failing to comply” with a traffic sign – i.e. jumping red lights.

Although enforcement of cyclists on the route more than doubled from 310 in 2018, enforcement of motorists during the same period dropped by almost two thirds, from 174 offences to just 61. In 2016 and 2017 10 cycling tickets were given each year. London-wide, the Mayor's office says,  1.5% of offences were recorded against cyclists.

The London Cycling Campaign’s (LCC) Simon Munk expressed concerns the Met Police is going after an easy target, rather than the cause of danger on the roads. “It’s difficult to tell exactly what’s going on,” he said, “but it doesn’t look like a proportional policing in terms of road danger.

The FOI was submitted by the chair of the Cycling Embassy of Great Britain, Mark Treasure, who called the findings “quite alarming”. All of the 636 cycling offences in the response contained identical wording: “ride a pedal cycle on a road and fail to comply with the indication given by a traffic sign”.

It found police had enforced offences over four years as follows:

Observations by road.cc suggest this cycling enforcement is carried out by Police Community Support Officers (PCSOs) positioning themselves beside signalised junctions such as Bow Roundabout and pedestrian crossings, stepping out to stop people who have cycled through a red light. PCSOs don’t have the necessary powers to stop drivers.

Munk adds while the police have done good work on dangerous locations like the A10 in Enfield, there are significant improvements needed in other areas. “It’s not OK that a dangerous and confusing location for cyclists [like Bow Roundabout] is the location the Met Police are choosing to crack down on cyclists, while they aren’t cracking down on drivers or known dangers on those roads.”

Munk adds: "We are regularly contacted via LCC’s legal advice helpline by cyclists who have been knocked off, threatened, really badly treated on the roads, and where the police don’t follow CCTV up." He gave a high-profile incident on Swains Lane as one such example, where the victim of dangerous driving had to source his own CCTV footage to secure prosecution for the driver.

The Met's Cycle Cops come under fire intermittently for what some feel is an excessive focus on cyclists.

Targeting cyclists "not the way to achieve Vision Zero"

London’s Vision Zero action plan was launched in July 2018, with the aim of reducing all road deaths and serious injuries in the capital by 2040. The most successful Vision Zero cities target the cause of the greatest danger which, in London, is speeding drivers, involved in 37 per cent of road deaths.

In 2018 the ticketing of cyclists on CS2 increased by 31 times, while ticketing of drivers dropped. Munk says though the Met are "buying into Vision Zero", targeting cyclists won't achieve road safety goals.

They added police enforcement across London tackles the greatest dangers, including speeding, and using a mobile phone while driving, adding "officers will take appropriate action against cyclists if they put themselves and others at risk."

London Green Assembly Member, Caroline Russell, raised concerns over enforcement of the route in relation to Vision Zero, during Mayor’s Question Time in September, after a week-long blitz of cyclists at Bow Roundabout and pedestrian crossings. She asked whether a focus on cycling was “fair and proportionate” to the danger those on two wheels posed.​

In response to the latest figures, Russell said: “I’ve asked the Mayor twice to explain the disproportionate policing focussed on people cycling and not on people driving cars too fast or making dangerous turns over the cycleway through red lights. It is motor vehicles that are the overwhelming cause of danger on our roads and that is what policing should be focused on.”

In 2017 Karla Roman was killed cycling on CS2 when a coach driver entered an advanced stop box at traffic lights in Whitechapel, before turning left across her path. Prior to construction of the protected cycle route several cyclists died along its length, including two at Bow Roundabout.

The Mayor's spokesperson added: “Reducing road danger is a key priority for the Mayor and TfL, which is why we’re investing record amounts in making cycling and walking safer, and transforming London’s most dangerous junctions. We are lowering speed limits in central London, directly tackling unsafe driving through Operation Close Pass and our world-leading Direct Vision Standard – which will remove the most dangerous lorries from our roads - started in October.”