A vision in white this year, one groupset down from 2010 with a lower price tag to match
by dave atkinson

Giant, under the steerage of Mike Burrows, were the originators of the compact road format, and the TCRs are the direct descendants of those ground breaking bikes. We've come a long way since then, and the new 2011 TCR Advanced 2 brings the range right up to date.

Giant tweak their frames almost every year, but the TCR platform is, it would seem, substantially unchanged from last year's bikes. The huge downtube – it really is a monster – is butted at one end by the PowerCore bottom bracket which uses press-fit bearings and a full-width shell for maximum stiffness. At the other end the OverDrive headtube is asymetric (1-1/8" to 1-1/4") to shore up that end. 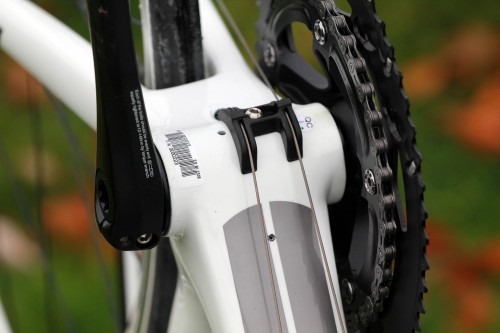 Those two updates, which are appearing in lots of 2011 bikes, were made by Giant for their 2010 range, so you could say they're a bit ahead of the game. Cables seem to be venturing inside tubes more and more, but Giant have stuck with the standard under-BB setup for the wires. Although the frame is pretty chunky it's still a good-looking bike, with this year's white livery reflected in the DT Swiss RR1800 wheelset and the Fizik Arione saddle. 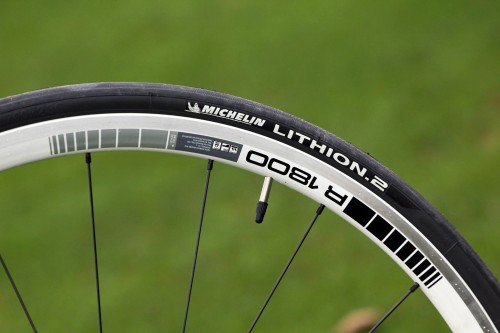 You might be comparing this year's TCR Advanced 2, at £2,250, to last year's and initally think you're getting a real bargain since it's the best part of half a grand less. Actually the spec has been downgraded a fair bit. The fork isn't a full Carbon affair this year, and instead of Ultegra 6700 you're getting the new 105 groupset instead. Those nice-looking wheels are a bit weightier than last year's Kysrium Elites, too. That said, the overall weight of 7.9kg (17.4lb) is on the money and there's plenty of room for some upgrades on a frame that will likely justify them. Overall the price drop and the kit downgrades are a fair match, and it's a decent value package. Finishing kit is mostly Giant own-brand stuff which always does the job even if it's not the flashiest gear. Obviously you get the shaped Carbon seatpost to fit in the teardrop-profile seat tube, and the stem and bar are alloy units with Giant's bar tape providing a bit of padding. Michelin Lithion tyres are the choice of rubber.

Stay tuned for a full review in the coming weeks.