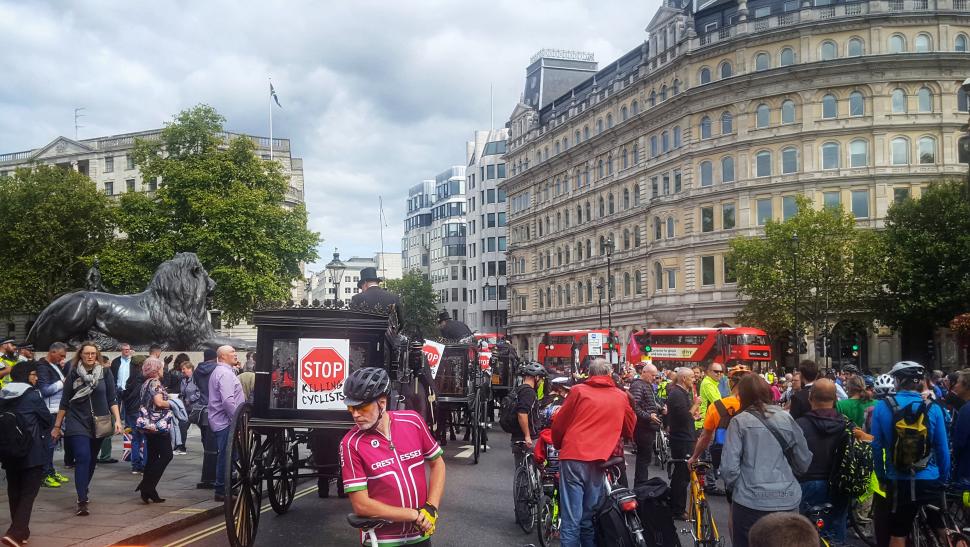 National Funeral for the Unknown Cyclist 1

Hundreds of cyclists yesterday participated in a funeral procession through Central London yesterday calling for billions of pounds to be spent on cycling and walking to help protect vulnerable road users and help tackle the climate emergency.

The protest, organised by the campaign groups Stop Killing Cyclists and Extinction Rebellion, made its way from Lincoln’s Inn Fields via Aldwych and the Strand to Trafalgar Square, where a 15-minute die-in was held.

Originally, it had been planned to hold the die-in outside the Treasury on Whitehall, but was moved at the request of the Metropolitan Police due to separate demonstrations in the area by both anti-government and pro-Brexit campaigners.

Cyclists of all ages and on all kinds of bicycles took part in the procession, billed as the National Funeral for the Unknown Cyclist, which also included three horse-drawn hearses and a cargo bike likewise carrying a coffin.

The coffins carried placards saying “Asthma,” “Crashes,” “Obesity” and “Climate” to highlight the impact of motor vehicles on people’s health and the environment and the procession was accompanied by suitably mournful recorded bagpipe music.

Police outriders stopped traffic to allow the protest to pass safely through the streets, watched by locals and tourists alike, many taking leaflets explaining what it was about.

The protest comes just days after Chancellor of the Exchequer Sajid Javed announced his Spending Review which made no provision for active travel, with the die-in at Trafalgar Square followed by speeches at the Duke of York Steps on The Mall.

“The 2019 budget must be a climate and ecological emergency budget that includes £6 billion per year for the creation of a national cycling network and the reversal of the toxic fuel duty cuts.”

The campaign group is also calling for a reversal of the planned cut in fuel duty as well the introduction as car-free village, town and city centres throughout the country.