The Briton has covered more than 900 kilometres to date since the race started on Saturday – although judging by a pair of tweets he sent last night, the altitude is proving a challenge, with the highest point in the race - at a whopping 4,000 metres above sea level - still to come. You can follow the live tracker here.

(1/2) ‘Beautiful night last night, clear skies so just got my sleeping bag out. Struggling with the altitude yesterday, anything above 2,800 is really tough. Descended down last night, slept lower. #SRMR2019 pic.twitter.com/qjGsMEqIlF

(2/2) ‘Got a couple of climbs after Beatov this morning, then down to the Chinese boarder section, which is a long 250km stretch above 3,000 meters. I hope my body adjusts otherwise it’s going to be horrible!’

Tao Geoghegan Hart and Wout Poels will lead Team Ineos at the Vuelta, with the line-up announced today also featuring Owain Doull, who will make his Grand Tour debut. 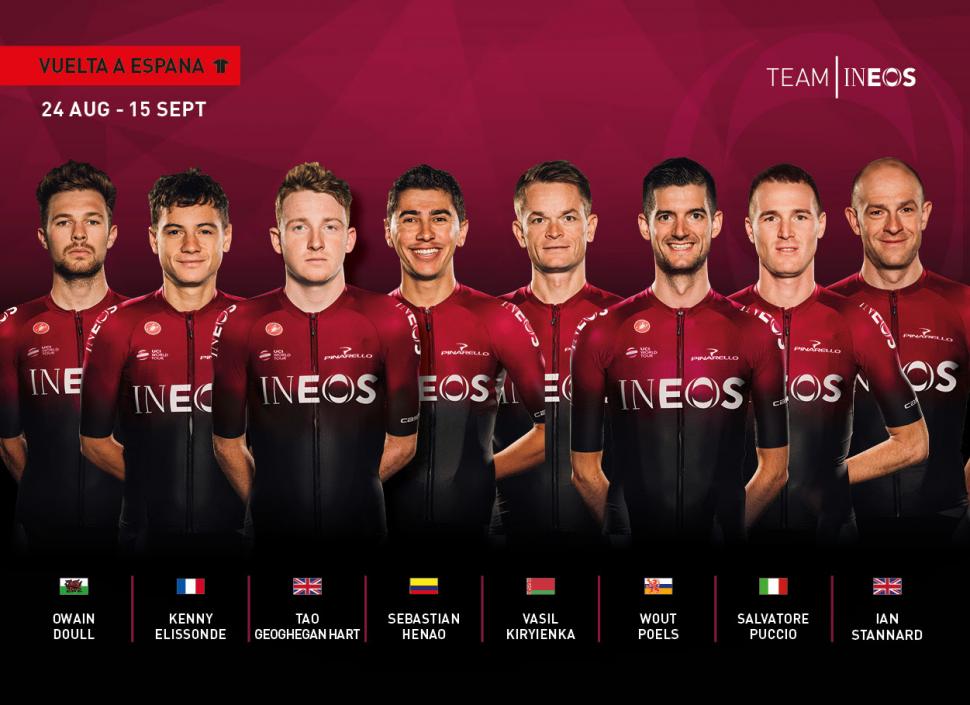 The team's roster for the Spanish Grand Tour, which starts on Saturday, is completed by Kenny Elissonde, Sebastian Henao, Vasil Kiryienka, Salvatore Puccio and Ian Stannard.

Lead Sport Director Nicolas Portal said: “I believe we have a really talented blend of youth and experience in this Team. The opportunity for Tao to learn from Wout as they lead our Team is a special one and we have faith that both of them can leave their mark on this Vuelta.

“We are also delighted for Owain, who is riding his first Grand Tour for the Team. He’s been building up to this moment and it’s a great opportunity for him to ride alongside the likes of Ian and Vasil over the next three weeks as he takes the next step in his career.”

He added: “The Vuelta is always a really tough race, but one that we always look forward to. We love racing in front of the Spanish fans and have had some fantastic success over the years. It promises to be a hard-fought edition this year with some very tough climbs as always and we are looking forward to the start on Saturday.”

20 August 2019, 17:48
No action by Ofcom over Cyclists: Scourge of the Streets? documentary despite 100s of complaints

The Channel 5 documentary Cyclists: Scourge of the Streets? was the single most complained about TV show broadcast in the UK during July attracting nearly 400 complaints according to Ofcom.

In the past two editions of the regulator’s Broadcast and On Demand Bulletin the programme, which aired on 9 July, has appeared on a list headed “Complaints assessed, not investigated,” adding that “after careful assessment” complaints into the programmes listed would not be pursued “because they did not raise issues warranting investigation.”

327 people complained in the week following the transmission of the programme that it was “materially misleading,” with 34 similar complaints lodged between 15 and 28 July.

A further 36 complaints were classified as outside Ofcom’s remit, which it says applies in cases where it “is not responsible for regulating the issue complained about,” taking the total number of complaints to 397.

More than three weeks after the Transcontinental Race No. 7 began in Bulgaria – and a fortnight after Germany’s Fiona Kolbinger became the first female winner, there are just two cyclists left on the road – the Belgian pairing of Els De Clerq and Marie Lou Vanassche.

Currently the pair, who have the respective cap numbers 250a and 250b, are riding a little to the north of the Loire Valley, roughly midway between Tours and Angers and with around 400 kilometres left to the finish.

You can track their progress via the transcontinental.cc website.

A four-year-old boy has been reunited by his parents after going for a solo bike ride in Amsterdam on Saturday afternoon, reports the Netherlands Times.

Police were alerted to the youngster’s presence on the streets of the Dutch capital by a passer-by who called officers after spotting him cycling through a red light on Ceintuurbaan as he pedalled towards Maasstraat.

He was taken to a police station but was unable to tell officers where he lived and an online appeal drew no response, nor had he been reported missing. After several hours, police, accompanied by a public health worker took him out for a bike ride and he spotted someone he knew.

The father joined the mother in looking for the child and found him with police officers and a family friend on Maasstraat, close to his mother’s house.

"He just learned to ride a bike without training wheels and wanted to buy a toy car,” his father added.

“He did that recklessly enough that someone reported him to the police. He is not allowed to cycle for the time being. And if he is going to play outside, someone has to stay with him for now."

Malaysia's prime minister Dr Mahathir Mohamad grabbed plenty of attention from social media followers in the south east Asian country at the weekend after sharing a video of him going for an 11-kilometre bike ride on Saturday at the sprightly age of 94.

Mohamad, who first served as prime minister from 1981-2003, returning to the office last year and becoming the world's oldest head of government, wrote: "This morning we had the chance to bike almost 11km. Thank God, it feels fresh and vibrant."

Your chance to look cool, support your favourite website (that's road.cc, btw), be kind to the planet, and all at a bargain price...
There's more info here

Lizzie Deignan, Great Britain’s top female road cyclist, has announced that she plans to retire after next year’s Olympic Games in Tokyo.

The 30-year-old returned to competition earlier this year after giving birth to her first child and next month will aim to win her second road world championship, with the women’s elite race passing through her home town of Otley, West Yorkshire.

That, plus seeking to win Olympic gold in Tokyo – she was runner-up to Marianne Vos of the Netherlands at London 2012 – are the two main goals the Trek-Segafredo rider has set herself as her career draws to a close.

Deignan, who in June won the Ovo Energy Women’s Tour, told Cycling News: "I made the decision [to retire in 2020] during my pregnancy. I wanted to return just for the Yorkshire Worlds and the Tokyo Olympics, and that would be it."

She added: "The biggest motivation for returning was to try and become the Olympic champion. There's another four-year cycle after Tokyo to get to the next Olympic Games, and I think that would be too much."

A four-time national champion on the road, Armitstead won the world championship in Richmond, Virginia in 2015, a year in which she also clinched the season-long women’s world cup title for the second successive season.

She headed to the Rio Olympics as one of the favourites to win the road race but finished fifth, with her build-up to the event overshadowed by the news that she had missed three anti-doping controls, only escaping a ban because the official due to carry out one of those tests was deemed not to have made adequate efforts to contact her at the hotel she was staying at.

Tune in to @bbc5live at 11:30 to hear our Policy Advisor, @Chris_Boardman talking about why we need to open up our countryside paths to be enjoyed responsibly by everyone, in a healthy, non-polluting way.

Tune in and listen to one of the most sensible voices in cycling.

Mat Brett has all of the tech details here 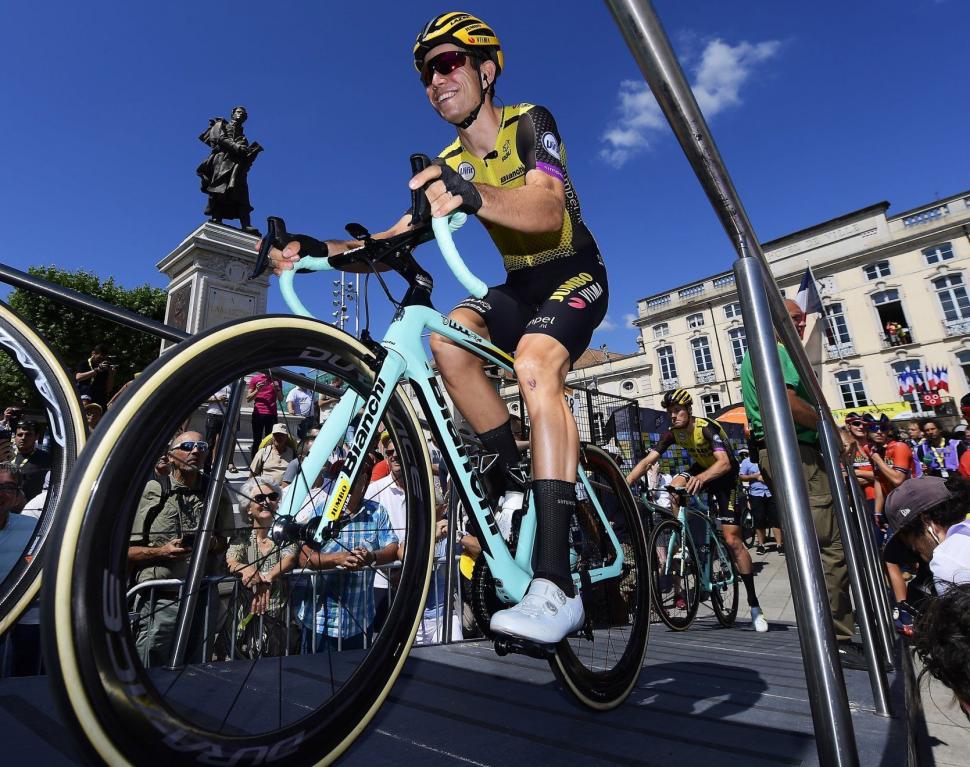 Wout Van Aert's crash in the TT on stage 13 of this year's Tour looked seriously painful.

The Belgian Nation TT Champion caught his thigh on a barrier on a tight, fast right-hand bend, causing a deep wound to his thigh muscle.

Speaking to Belgian paper Nieuwsblad, Jumbo-Visma sports director spoke of the biggest issue being the time Van Aert will have had off the bike.

“Normally it takes ten to twelve weeks for a rider from zero to get back in shape. But because in the case of Wout we still do not know how the injury will evolve, we cannot comment on a time limit. It will be a difficult job to get Wout back to its old level by the spring."

Van Aert may be able to return to competition in December and we really hope that he does, though challenging a flying Van der Poel might be a little too much to ask.

Our favourite pro-turned-YouTuber, Phil Gaimon is famous for loving cookies and his Worst Retirement Ever videos.

Since retiring, Phil has been keeping himself in shape, with the aim of targeting KoMs on Strava for our entertainment. Bizarrely, his retirement was on track to being somewhat halted when he got the chance to go to the Olympics with the US track team in Tokyo next year.

That meant doing some track racing and in a qualifying race, he hit the deck, hard! Here's how it happened. 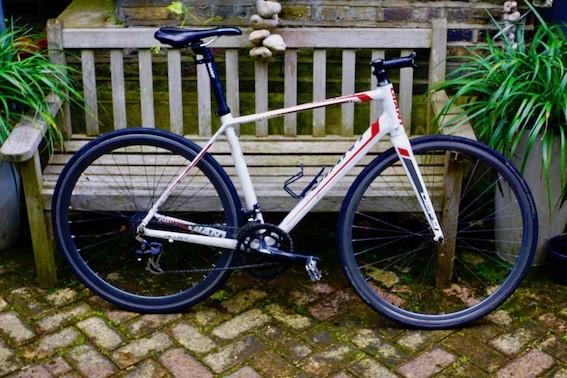 Well, this is a bit of an odd one.

What appears to be a stolen Giant Defy 3 was dumped in a garden, minus its brakes and handlebar.

Maybe the thief just didn't like the geometry, or they were specifically after those components? All we know is that it appears to be rather difficult to reunite a found bike with its owner.

So, if you know anyone who's had their Defy 3 go missing then get them to contact Jon over on Facebook.

1
Canyon Ultimate CF Evo 2020 - still silly light but now much cheaper
2
(Not so) Near Miss of the Day 380: Driver deliberately clips cyclist (includes swearing)
3
Sir Dave Brailsford reveals his personal diet and training regime on Strava
4
5 Cool things coming soon from Triban, Prime, Oxford Products, Indik8a and Bioracer
5
Blow to British Cycling as it confirms HSBC UK to end sponsorship four years early
6
Business is booming! Garmin, Shimano and MIPS reveal profits boost in 2019
7
How coronavirus is taking its toll on the bike industry and what it means for you
8
Bike stolen from funeral after late cyclist's friends rode alongside hearse during procession