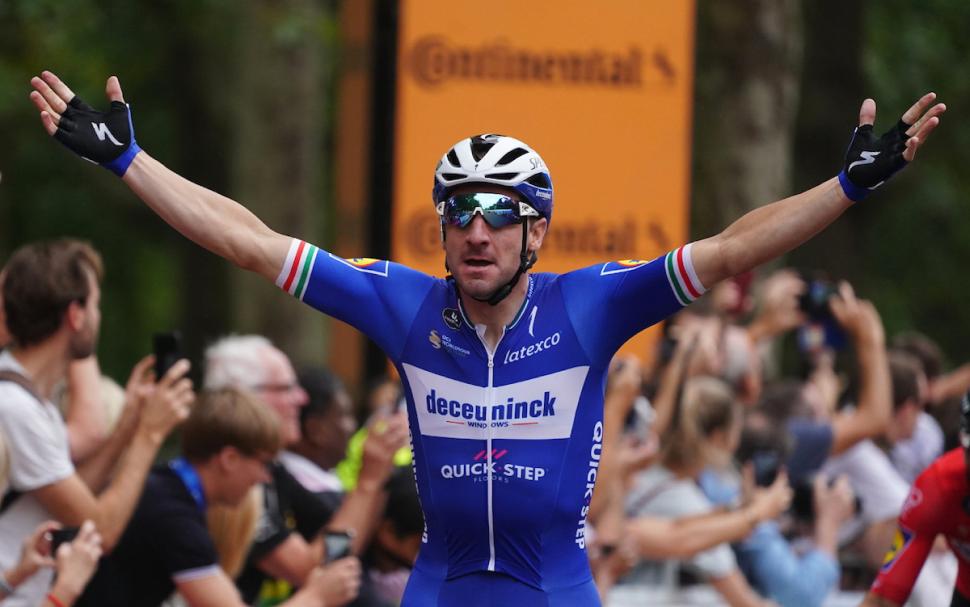 Today's 169-kilometre race had a new route this year, starting at Bushy Park close to Hampton Court Palace in the south west of the capital before the riders tackled a loop including the Box Hill climb five times before heading back into the city centre.

A big crash as the peloton speeded along Millbank towards Parliament Square with two kilometres left to ride took out a number of riders, but Viviani managed to avoid it.

By that time one of the fancied riders for today, Lotto-Soudal’s Caleb Ewan who last week won the final stage of the Tour de France on the Champs-Elysees, was out of contention, having been dropped on one of the climbs of Box Hill.

Instead it was the Deceuninck-Quick Step rider, runner-up here last year and who has made no secret of his ambition to win the race, who prevailed.

“It was great teamwork because Michael ended up finishing third,” Viviani said. “Earlier I saw some guys go down in the crash but luckily we were on the right side and we missed it.

“The team put me in a great position as we came past Buckingham Palace. I was with Iljo Keisse and Michael Morkov and we were in the middle of the group so we just missed the crash and, with the wind in my pocket, I liked the new finish.”

He continued: “This was one of the five ‘Classics’ I have in my head that I want to win in my career, so it’s good to have done it,” beamed Viviani.

“I’ve loved racing in London ever since I was here at the Olympics in 2012. I was quite young then and it was a really special course so I kept in mind this race for the future, and when it became a WorldTour one-day classic, I added it to the list of races I wanted to win.

“I really committed with the team to come here, so now I’ve won and I’m really happy. I’ve rested a bit since the end of the Tour.

It was a really tough Tour for us so I’m happy with today’s result and I will be back here to defend my title next year, 100 per cent,” he added.

Katusha-Alpecin’s Alex Dowsett, a member of a three-man break today, found himself in the unaccustomed position of picking up the King of the Mountains prize, with points awarded as the race headed over Newlands Corner and each time it crossed the summit of Box Hill.

“The plan today was to go for the early break,” he said. “We discussed what to do among ourselves and decided to share the points.

“I think I was possibly the older and wiser one, so I made sure I was second up each climb and did everything to secure the overall by winning the last set of points.

“The lights went out on the final climb of Box Hill but for me to get a King of the Mountains is fairly unheard of so I’ll savour this and bask in my own glory for years to come,” he added.