"The first true performance e-road bike", it says. With a price tag to match...
by dave atkinson

The big news today is that Specialized is getting into the e-road and e-gravel market. The Big S has had a range of Brose-powered city bikes and e-MTBs for a while, but now it’s turning its attention to what’s probably the fastest moving bit of the e-bike world at the moment.

If you’ve been following e-road bikes you might be wondering: which side of the fence are they on? Have they gone for a heavier full-power motor system, the Brose unit they use in the rest of their bikes most likely? Or are they using one of the lightweight systems, Fazua or Ebikemotion, for less power but neater integration and lower overall weight?

The bike is called the Turbo Creo SL, and Specialized has decided it’s “the first true performance road bike”. Or at least that’s what they’re saying about it. We’re pretty sure there will be some other manufacturers who’d disagree quite strongly with that. But anyway.

Specialized is aiming this bike at what they call “authentic riders”. That means people who are already competent riders but are buying into the idea of electric assist. It’s designed as a performance bike, and it sits in line with the Venge, the Tarmac, the Roubaix and the Diverge; there’s an S-Works build and it’s a top-dollar bike with the three initial builds starting at £7,499. The carbon frame is Specialized’s top-end 11r spec, the same used for all the S-Works bikes. 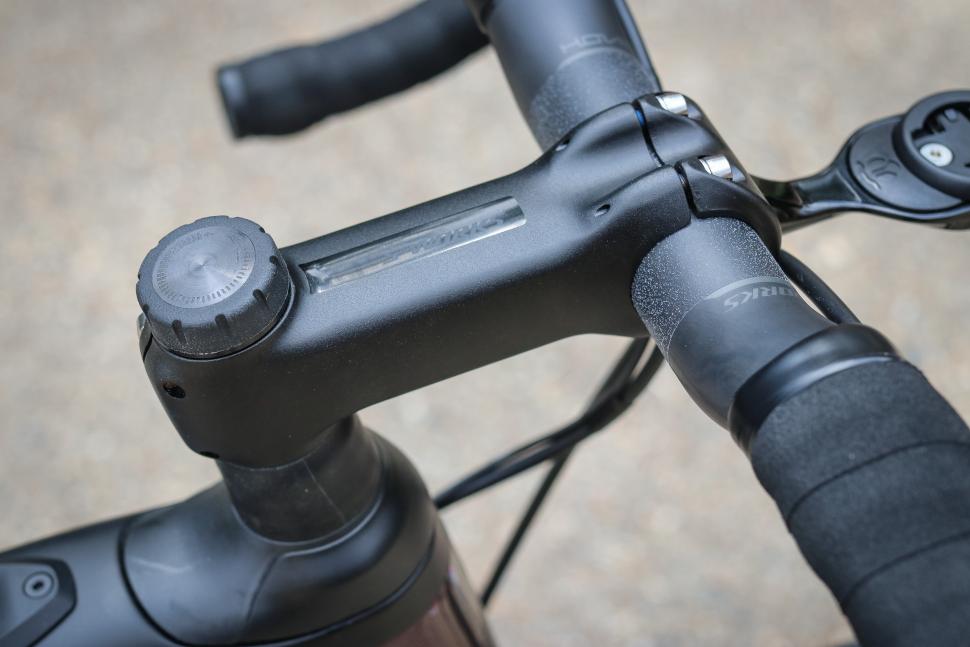 Of those four specialized platforms above it’s most like the Diverge. It’s a touch slacker but the geometry is similar, and all the builds of the bike get the Future Shock 2.0 from the Roubaix. If you haven’t seen that, it’s a suspension system that’s built into the steerer tube to isolate the handlebars from road shock. The updated version from the new Roubaix can be adjusted and locked out. 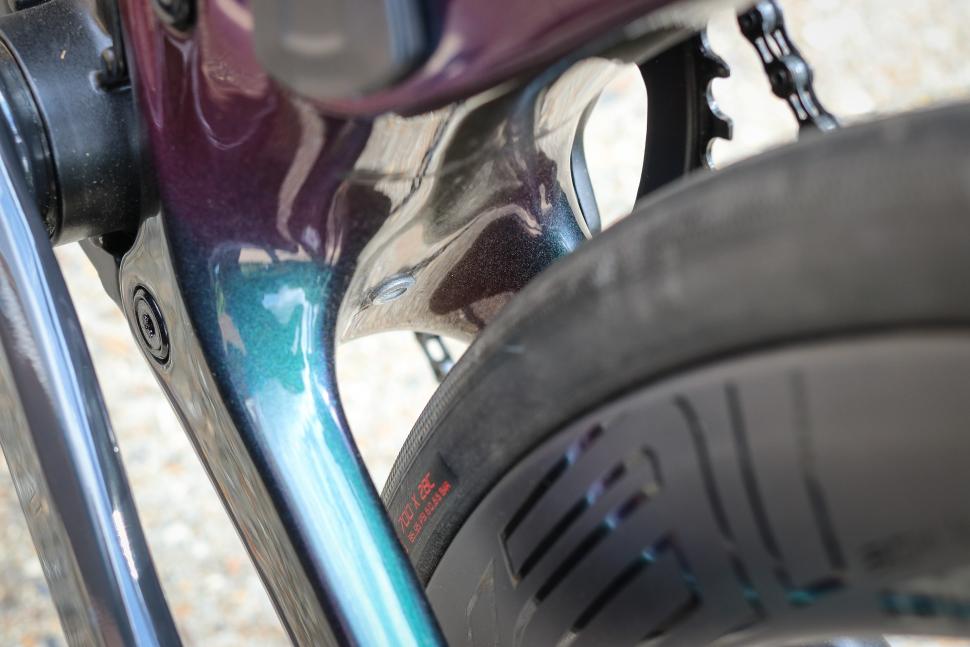 The frame gets hidden mudguard mounts for extra versatility, and the bikes will take up to a 700x40mm tyre. If you drop down to 650b wheels you can run up to a 47mm tyre, but the sticking point here is that the wheel spec is, for now, unique: Specialized is using what it’s called “Road Boost”, which is Boost axle widths – 110mm at the front and 148mm at the rear – but with 12mm through axles front and rear instead of 15mm at the front. So for now your wheel choices are – how shall we put it – limited.

The motor is called the SL1.1, and Specialized has developed it in cooperation with German automotive giant Mahle. You might not have heard of Mahle, but like Bosch it’s based in Stuttgart and it’s been making bits of cars for a very long time: 99 years in fact, although that makes it a bit of a plucky upstart compared to Bosch. Mahle also recently bought ebikemotion, so it’s well invested into e-bike hardware. The SL1.1 motor is a bottom bracket system. It’s got a magnesium housing for light weight and reinforced nylon gearing for low noise; Specialized says it’s tuned the motor acoustically so that the noise isn’t in a range that’s intrusive. There’s a decoupler so there’s no motor friction when you’re riding without motor power and it features IP67 bearing seals to cope with wet and muddy rides. At 1.95kg it’s very light for a mid motor: that’s almost a kilo less than the new Bosch Performance Line CX unit.

It’s not as powerful as that motor though, and isn’t designed to be. “It’s not less power”, Specialized was keen to point out, “It’s the right amount of power”. That right amount of power is a maximum of 180% assistance, 35Nm of torque and power capped at 240W peak output. That’s in the same ballpark as the other main players in the lightweight e-road market, the ebikemotion x35 and Fazua Evation drives. Specialized has worked hard on the power delivery to make sure that the motor responds well at the higher cadences (60-110rpm) common in road cycling, and to smooth the transition between assisted and non-assisted at the 25km/h cut-off.

The Turbo Creo SL uses a 320Wh internal battery. That’s less than a full-fat e-bike but a bit more than either the ebikemotion or Fazua systems, which are 250Wh as standard. The battery weighs 1.8kg, so with the motor, battery, a wiring loom and the Turbo Connect unit – the brains of the system – the overall system weight should be almost exactly 4kg. That’s a bit more than the ebikemotion (3.5kg) and less than the Fazua (4.7kg).

How much range you’ll get out of that is a bit of a how-long-is-a-piece-of-string question, but since we’ve managed 100km rides on both of the other lightweight systems we’d expect the Specialized to be in that ballpark too. Specialized claims that the SL1.1 system has over 30% more range than either of its main rivals, but we haven’t had a chance to put that claim to the test as yet.

If you want to go further then there’s a bottle-cage-mounted Range Extender battery available (it’ll be standard on the S-Works build) that adds another 160Wh of juice. You could have two if you wanted, and swap them round in the cages as the first is depleted. The Range Extender plugs into the charge port, which is on the side of the bottom bracket. The main battery can’t be removed; you need to charge it in situ. A full charge takes about three hours, or three and a half if you’re running a piggyback battery. 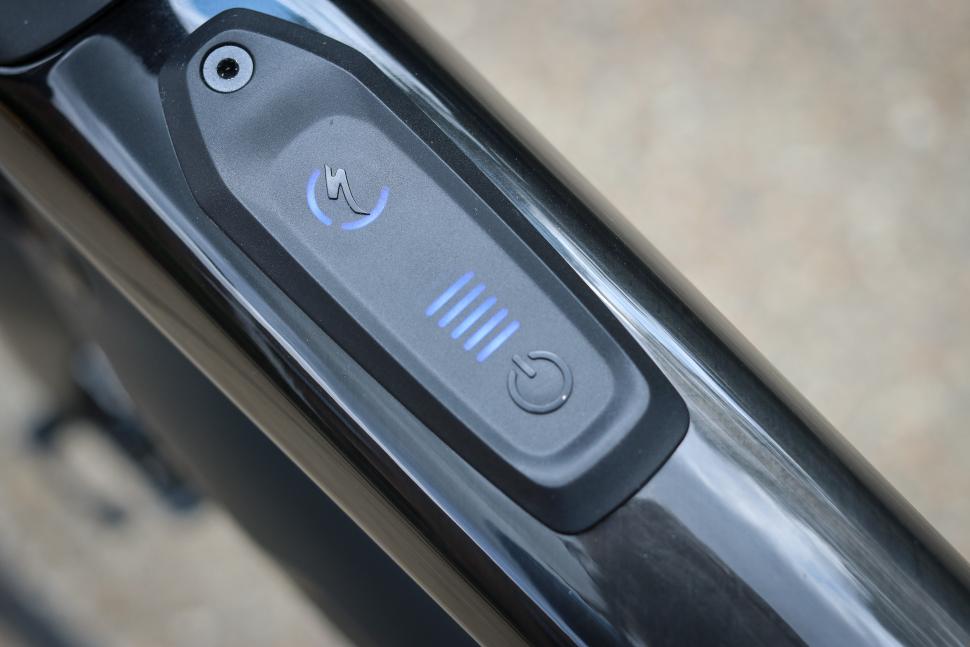 The system is controlled on the bike from the Turbo Control Unit (TCU) which is recessed into the top tube. You can turn the bike on and off and change modes, and there’s a 10-LED battery level indicator. If you’re using a Range Extender the TCU can show the charge state of both batteries by overlaying five Green LEDs for the bottle battery over ten blue ones for the main unit.

The TCU has Bluetooth connectivity and pairs with the Specialized Mission Control app. In there you can record activities and muck about with your motor settings so the modes are right for you. It also has a clever feature whereby you can tell the app how long you’re going to ride for, or how far, and it’ll manage the battery usage to get you round your lap without running out of juice. Obviously the bike doesn’t know if you’ll be finishing on the flat or up Alpe d’Huez, so one of the things in development is a GPX upload function so that the app can see the whole route and allocate resources accordingly; if that works it sounds like an excellent idea. The TCU is also ANT+ compatible so you can pair it with your existing GPS; it transmits power data from the torque sensor and battery state, and Garmin users can use the Specialized Connect IQ app to directly control the bike. If you want a display but you don’t use a GPS then there’s a dedicated Turbo Connect wireless display that gives you all the pertinent info on a simple LCD screen.

For launch the Turbo Creo SL is available in three builds. The top road spec is the S-Works Turbo Creo SL with a Shimano Dura Ace/XTR Di2 mix, Roval CLX 50 Disc carbon wheels and 28mm S-Works Turbo tires You get an S-Works Carbon Hover bar too, and the overall bike weight is a claimed 12.2kg. You’ll need deep pockets to the tune of £10,999 to own one. The 13.5kg Turbo Creo SL Expert is a lower-spec road build, but it’s still high spec, with a Shimano Ultegra/XT Di2 component mix, Roval C 38 Disc carbon wheels and a £7,499 price tag. That’s the same price as the more gravel-oriented Turbo Creo SL Expert EVO, which gets flared bars, a dropper seatpost and 700x38mm tyres. Again, it’s a Shimano Ultegra/XT Di2 mix. If you want a Range Extender battery for either of these builds (it’s included with the S-Works model) then that’s another £300 on top. All bikes will be available in 49, 52, 54, 56, 58 and 61cm frame sizes. 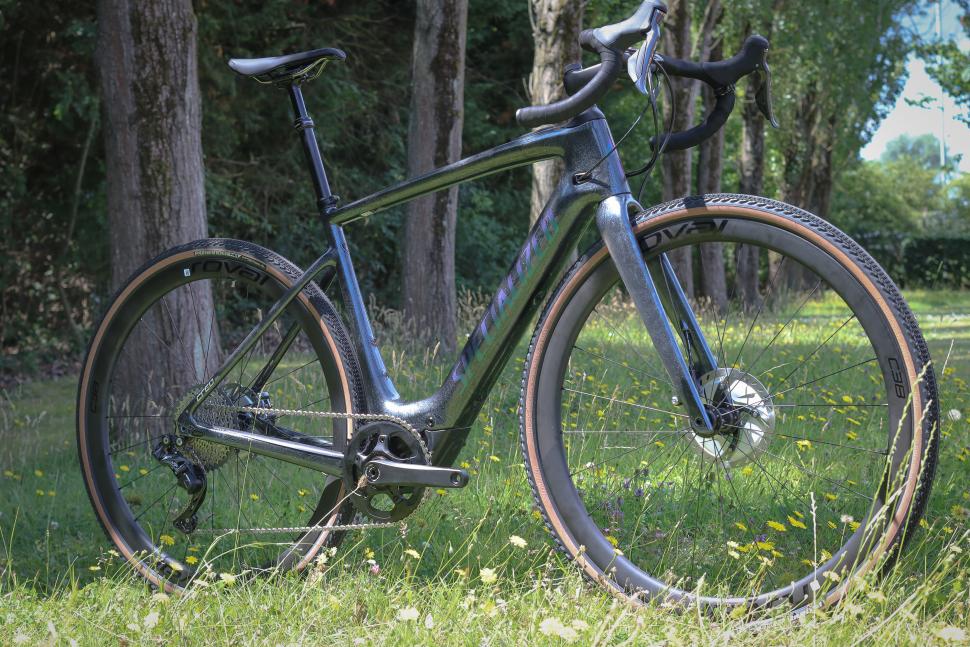 As well as those three bikes on general release there will also be a special Founder’s Edition bike that’s limited to 250 worldwide. That’ll have all the fancy bits – CeramicSpeed bearings, super-light carbon finishing kit, gold anodised hardware, a gold logo – and a stratospheric price tag of £13,499.

Specialized intends to use the new motor on a wider range of e-bikes over the coming years, so stay tuned for more news on that. We've put our order in for a bike to review, so as soon as it arrives we'll sling a leg over and let you know what we think.