All today's news from the site and beyond ahead of the Tour de France starting tomorrow... 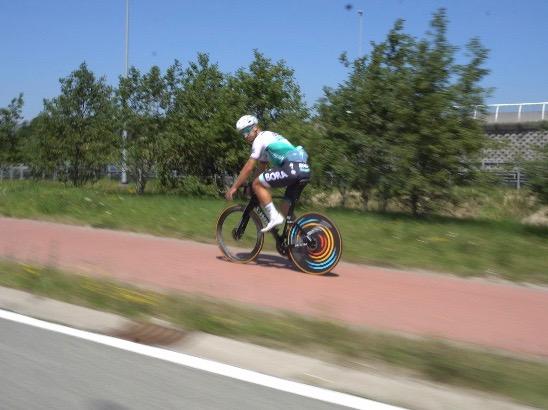 On our way to another team hotel, we spotted none other than Peter Sagan himself out training on his time trial bike one last time before the Tour de France Grand Depart tomorrow. Sagan was chugging along at one hell of a pace in front of a gang of Astana riders, and shortly afterwards the rest of his own team arrived with Peter nowhere to be seen. Save something for the race son!

The opening stage features two climbs that over the years have so often proved decisive in the Tour of Flanders, the Muur van Geraardsbergen and the Bosberg, but today they feature early on rather than in the final. Nevertheless, it will as always be a nervous start for the peloton, and we can expect a lot of jostling for position ahead of both ascents as riders try and keep themselves out of trouble.

On the way back into Belgium’s capital, the race passes the battlefield of Waterloo, as well the suburb of Wouluwe-Saint-Pierre, the childhood home of Eddy Merckx, who spent more days in yellow than anyone else in Tour de France history. The peloton will be going full gas to reel in the day’s break ahead of what looks set to be a bunch sprint finish in the city’s Royal Park. 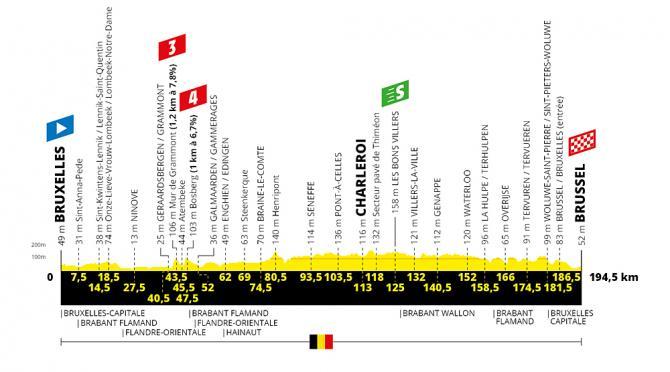 A change in the race lead is highly possible today, and even this early, time gaps between teams with overall ambitions may have an impact later on – but last year’s team time trial in Cholet saw just 11 seconds separating the fastest five teams, with the now-defunct BMC taking the win.

Today’s stage starts at the Palais-Royale in the Belgian capital and finishes outside its most emblematic building – the Atomium, built in 1958. Whoever is in the overall lead today will be sporting the iconic structure on the yellow jersey, with the one awarded after each stage each marking people and places in the race’s history. 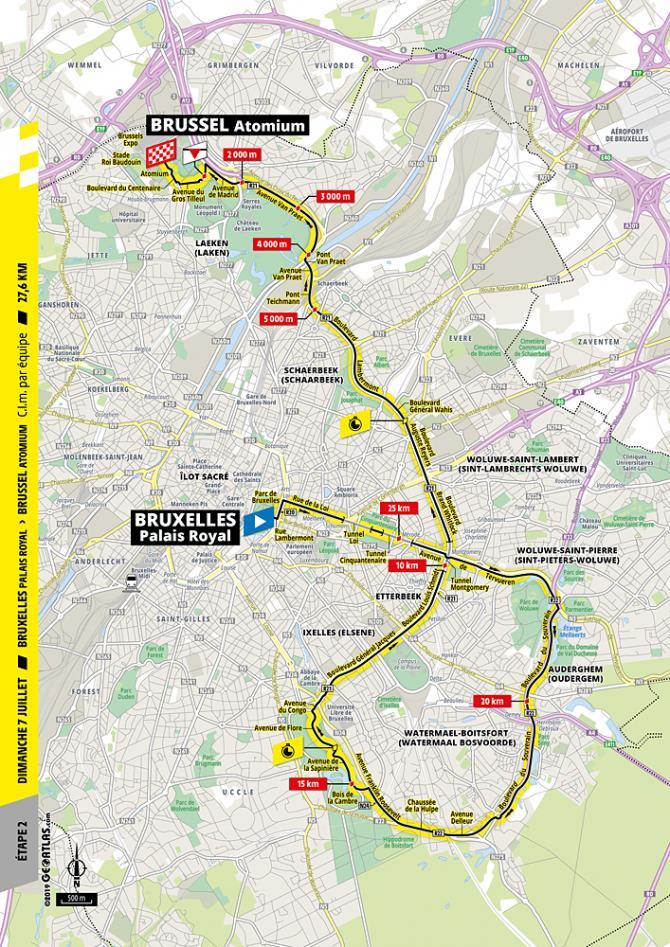 Another stage with a Spring Classics flavour – today, the Ardennes, with four punchy climbs within the final 40 kilometres as the race heads into France. It’s not going to end in a bunch sprint, for sure. There’s a time bonus available on one of those, 15 seconds from the line – remember Geraint Thomas banking some of those last year on his way to victory?

There’s also a 15 per cent slope approaching the line. One for Julian Alaphilippe … or a final Tour de France stage for Alejandro in the rainbow jersey? The Champagne for the stage winner should go down particularly well tonight – Epernay is at the epicentre of the wine-growing region. 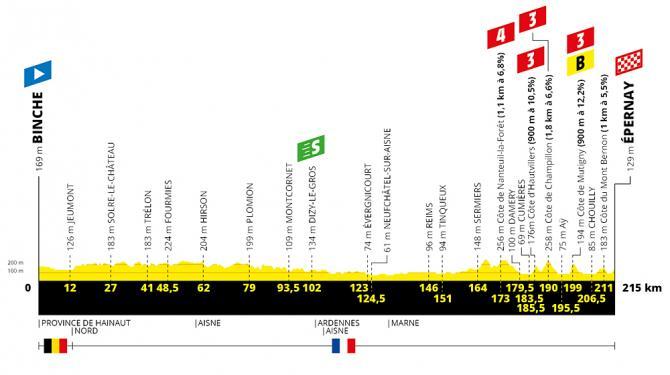 What better way to pay homage to Le Tour with some yellow boxer shorts? Just 18 euros to you monsieur.

The Velokhaya Life Cycling Academy – or Velokhaya for short – is a not-for-profit organisation based in Khayelitsha, South Africa.

They use their cycling-based programmes to involve youth in a positive, after-school activity.

Yesterday, at the Team Dimension Data team presentation in Brussels ahead of the Tour de France they were given the chance to join their heroes up on stage.

A journey from a rural township in South Africa, to @LeTour for @Velokhaya. 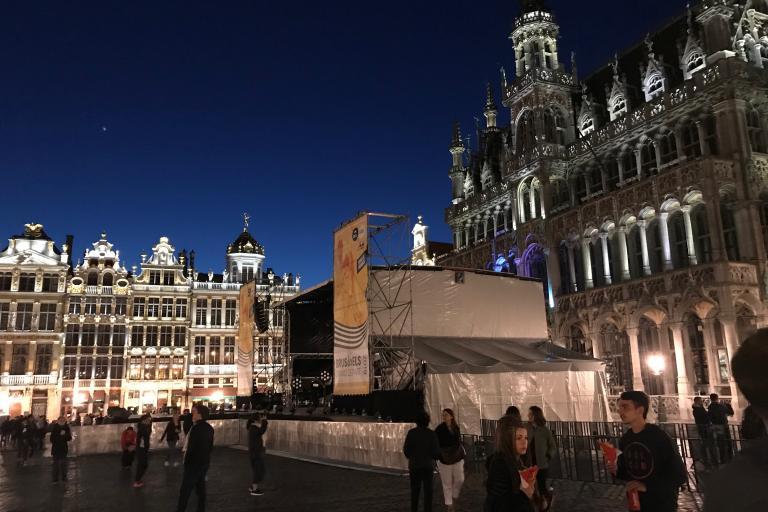 Elvira was born intersexual, meaning she has a combination of male and female biological traits.

By the end of 1936, Elvira was more interested in her identity, and was at last recognized as a man on 24 March 1937 after a name change. 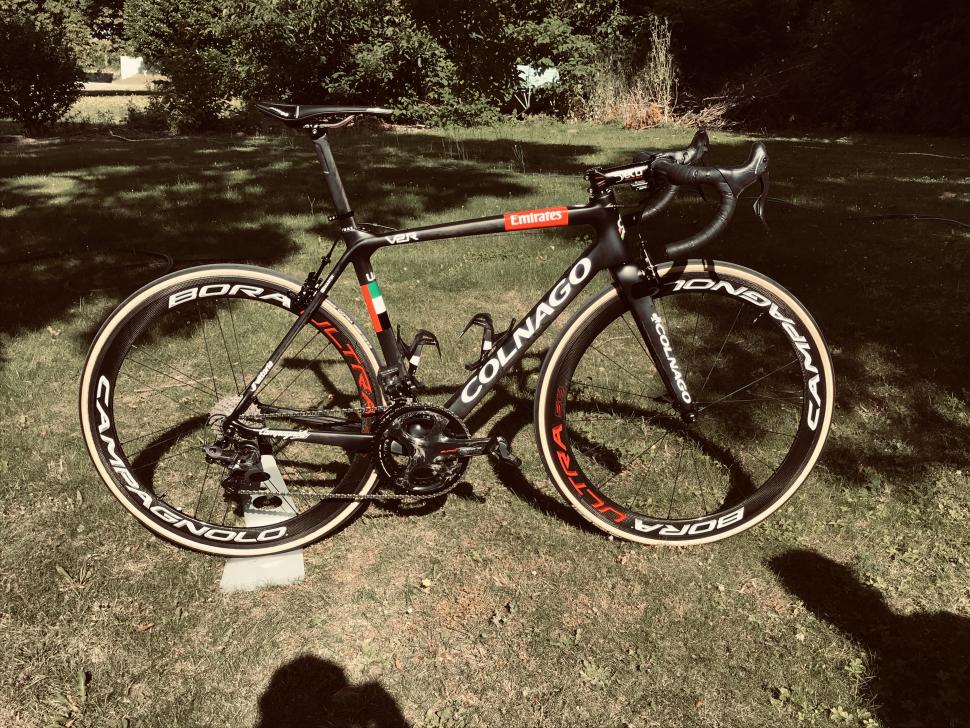 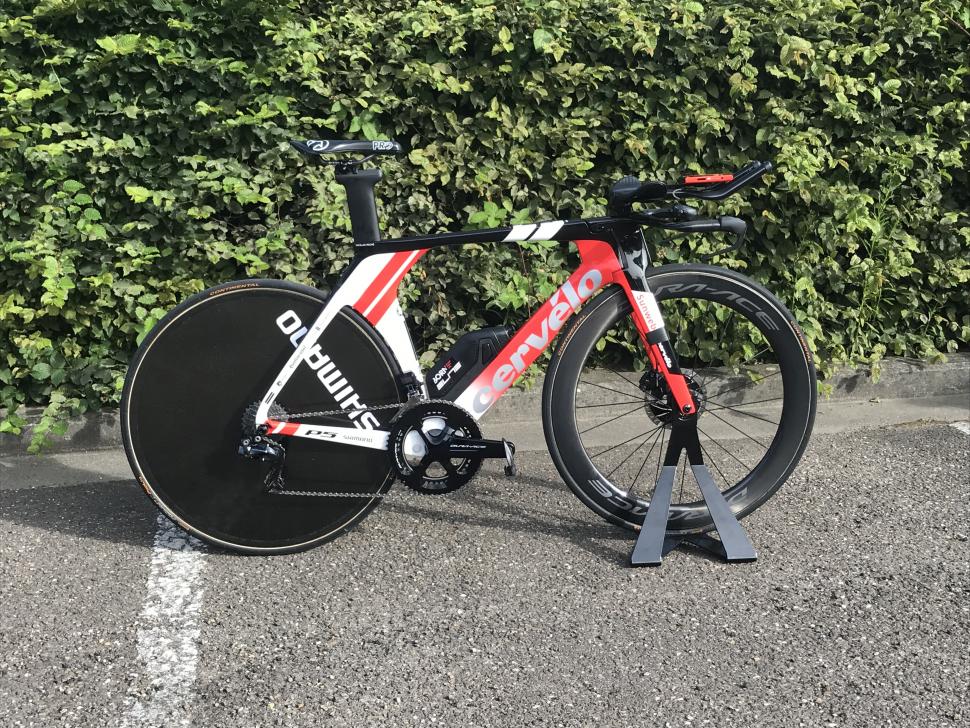 We've been having a gander at the TT bikes at the team hotels - with the second stage being a team time trial the riders and mechanics are making sure everything is tip-top. First up, the Cervelo P5 of Nicolas Roche with massive 58/46t chainrings... 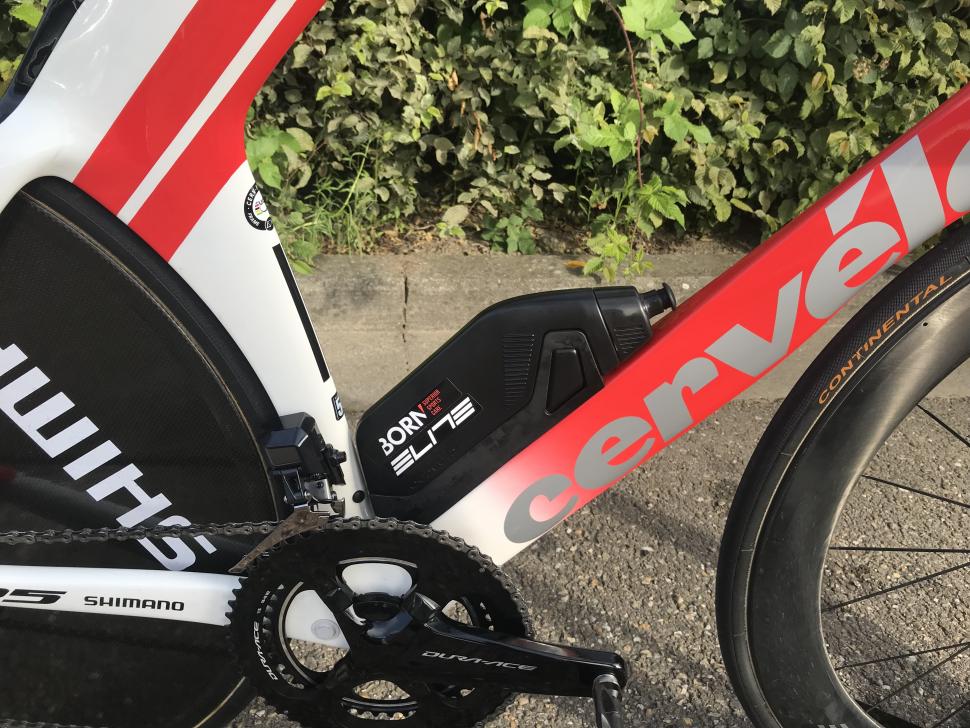 The mechanics told us Sunweb's bikes for the Tour were also specially painted in the UK with a much thinner and more delicate paint than the standard P5 to save some weight. We also spied this very neatly integrated Elite TT bottle and cage, different to the Chrono CX bottle set that joe public can buy. 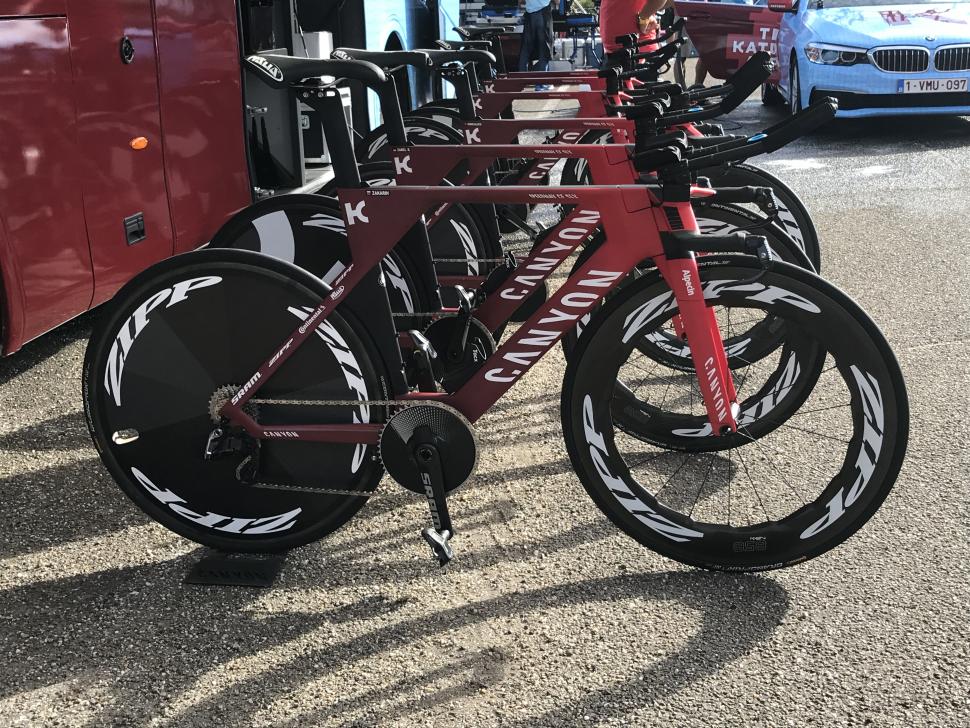 At the Katusha Alpecin camp, Alex Dowsett and co will be running a SRAM Red eTap AXS 1x set-up for their TTT. We also spotted a few riders using non-standard chainring sizes over at Trek Segafredo yesterday, clearly SRAM are happy to customise for their pro teams. The award for the craziest cockpit of the Tour so far goes to Rohan Dennis. His Merida Warp has 3D-printed bars, moulded to the shape of his forearms with some padding in there for extra comfort. There's even a computer mount built in... We think it's a goat anyway, and despite his rotund build this one is still supposedly good at climbing. Yours for 15 euros... 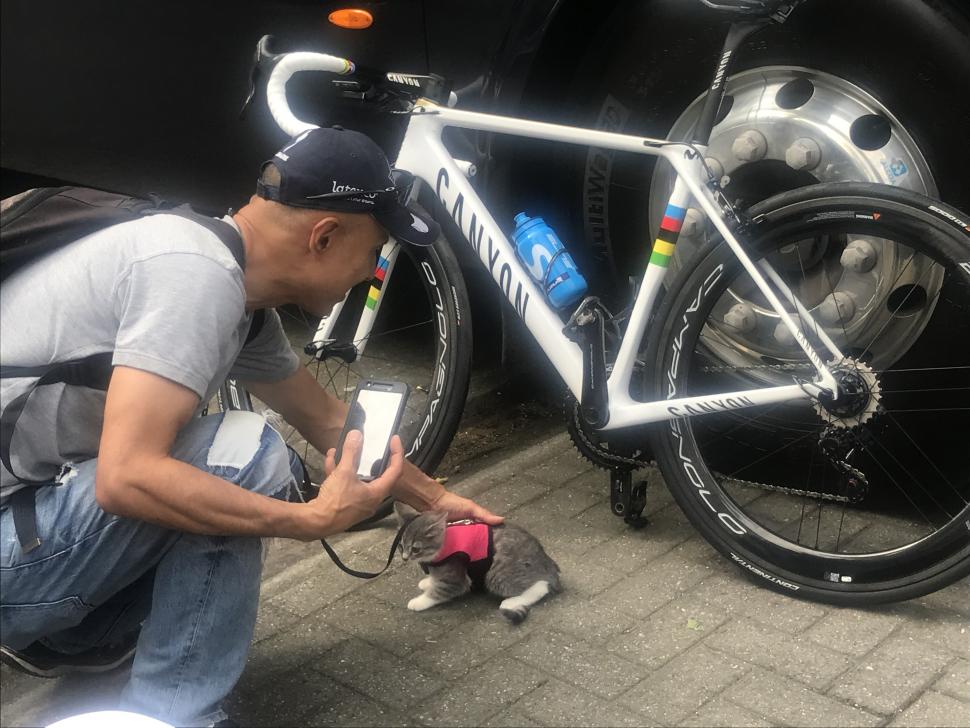 Going to check out the world champion's bike is a special occasion... so guess it's only right to bring your cat with you. We caught Valverde and his Movistar teammates just before they set off for a training ride around Brussels, with plenty of fans (human and feline) there to catch a glimpse of their heroes. In his first action as brand ambassador Geraint provides a glimpse into the world of professional downhill racing in a short film called “Confidence”. As Geraint himself said: “follow guys riding Continental tyres, they will stick when others will not. And sticking’s is what you want.” Let's hope he remains upright for the next three weeks...

"We know when you're going at 45-50kph the number one thing that slows you down is air."

Take a sneak peek behind the scenes with Team Ineos and Swiss Side as they give a bit of an insight into aerodynamic testing.

Meanwhile, @geraintthomas has just got a new bike...

Pleased to be getting @geraintthomas, one of the most patient people on Twitter, on a bike this July...  He's #NowaCyclist pic.twitter.com/xrIEGReU1q