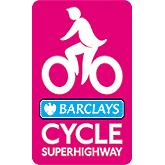 Residents on a street on the route of one of Boris Johnson’s Cycle Superhighways have threatened to take Transport for London (TfL) to court if the facility is not moved, claiming that the road is not wide enough for it, creating a “recipe for disaster.”

According to the Evening Standard, some 500 people living on the perhaps appropriately named Narrow Street in Limehouse have signed a petition calling for the bike lane to be moved and claim they were not consulted over plans to install the Carclays Cycle Superhighway CS3 there.

It’s a road that Mr Johnson knows well – last year, while cycling along it in a group that also contained his transport advisor Kulveer Ranger, the mayor narrowly escaped injury when a van hooked a parked car, almost dragging it into the path of the cyclists.

The protesters say that if TfL does not re-route the section of the cycle path, with runs from Tower Hill to Barking and was one of the first two routes launched in July, they may be forced to resort to taking the body to court.

Mark Slankard, Chairman of the Limehouse Community Foundation, told the newspaper: “Whilst TfL maintain there was extensive consultation done, it is difficult to find one resident in Narrow Street who says they have been consulted.

“Residents woke up one morning to find blue markings on the pavement and big blue mattresses' on the road. It's too narrow for the highway. It's a recipe for disaster,” he added.

Mr Slankard claimed that TfL had told the community group that they are thinking about the route to run alongside the busy A13, although TfL told the Standard that it had “no plans” to do so since there was “no evidence” of the current route affecting road safety.

Mr Johnson said that Narrow Street had been selected as part of the route since it was already popular with cyclists, adding: “CS3 was not intended go along the A13 instead of Narrow Street. However, at the request of the London Borough of Tower Hamlets, TfL is conducting a feasibility study into improving conditions along that part of the A13 for cyclists.

“There are no proposals to implement changes [yet] as they would be subject to the outcome of the study and a funding source being identified.”

A spokeswoman for TfL added: “We have met local resident groups in Limehouse to discuss their concerns. However there is no evidence to show that road safety in the local area has been compromised by the introduction of the superhighway.”

Meanwhile, the BBC reports that plans are underway to install a docking station for the Barclays Cycle Hire Scheme close to the Houses of Parliament, with Lord Brabazon, Chairman of Committees at Westminster, saying he hoped one could be put in place "for the convenience of the members of this House and their staff".

There is a docking station at Smith Square – site of the Conservative Party’s former HQ and still home to the TUC - around 10 minutes’ walk away..

Lord Brabazon added: "While we cannot permit a station for public use in the secure area of the estate, we are considering whether an alternative location can be found outside the secure area."