Two British doctors based in Australia have set a new Guinness World Record for the fastest round-the-world tandem ride, though – in common with solo riders circumnavigating the globe – they experienced some unexpected hazards along the way, including an encounter with a bear in Russia and being robbed at knifepoint in Mongolia.

Lloyd Collier and Louis Snellgrove, who work as A&E doctors in Townsville, Queensland, finished their ride around the globe in Adelaide last Thursday, 283 days after they had set off, breaking the previous record by seven days – subject to ratification by Guinness World Records – and raising money for neurology research. 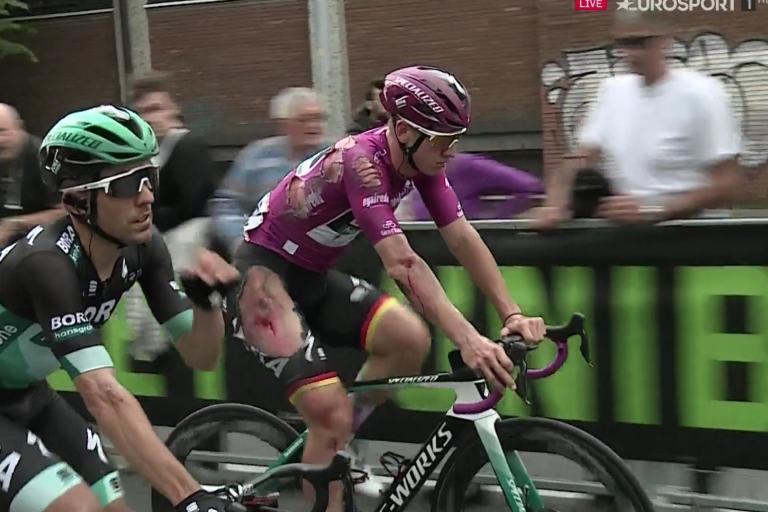 Groupama-FDJ’s Arnaud Demare has won Stage 10 of the 2019 Giro d’Italia in Modena this afternoon after a short stage across the flat roads of the Po Valley that, as expected, came down to a bunch sprint. Valerio Conti of UAE Team Emirates retains the race leader’s maglia rosa.

The Frenchman outsprinted Elia Viviani of Deceuninck-Quick Step to take victory, while behind a big crash took out a number of riders including one of the favourites for the stage today, Pascal Ackermann of Bora-Hansgrohe. 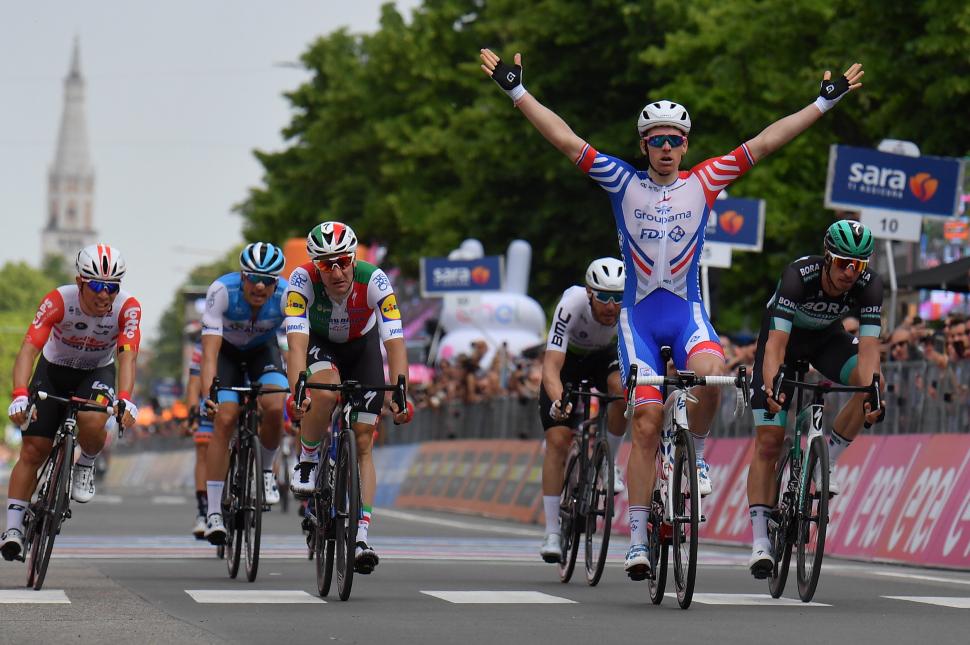 As racing resumed following yesterday’s rest day, the 145-kilometre stage from Ravenna was raced mainly at a sedate pace, the speed only picking up inside the final 20 kilometres.

By that time, a two man break comprising Luca Covili of Bardiani-CSF and Nippo-Vini Fantini’s Sho Hatsuyama had long been caught ahead of what for once was not a highly technical finish to the stage, with the final bend coming 2 kilometres from the line.

CCC’s Fran Ventoso tried to spring a surprise from 3 kilometres out, but he was caught inside the closing kilometre, just as the crash that cost Ackermann the chance to contest the win happened.

“I knew it would be a fast sprint with the last 20km very nervous. To avoid any crash, I asked my team-mates to keep me in the first ten or fifteen positions. They have been excellent. Ramon [Sinkeldam] has been very strong and Jacopo [Guarnieri] exceptional. A sprint like this, at full speed with no need to brake, was perfect for me. I and my team would have liked to win a sprint earlier in the Giro. I was always placed but I wasn’t winning. It’s a relief today. My goal is to reach Verona. If I have the legs to overcome the mountains, I’ll be there till the end.”

“In some stages of this Giro we rode very hard but it wasn’t the case today. I don’t like this kind of racing because it makes the finale more dangerous as many riders are still fresh and too many believe they can win. I don’t want to take unnecessary risks. I repeat that I want to keep the Maglia Rosa as long as possible. My biggest fear is the attacks of Vincenzo Nibali. They’re unpredictable.”

21 May 2019, 15:03
The ultimate millennial bike? Cannondale's Treadwell has a built-in phone mount and the app tells you how much carbon you've saved by cycling 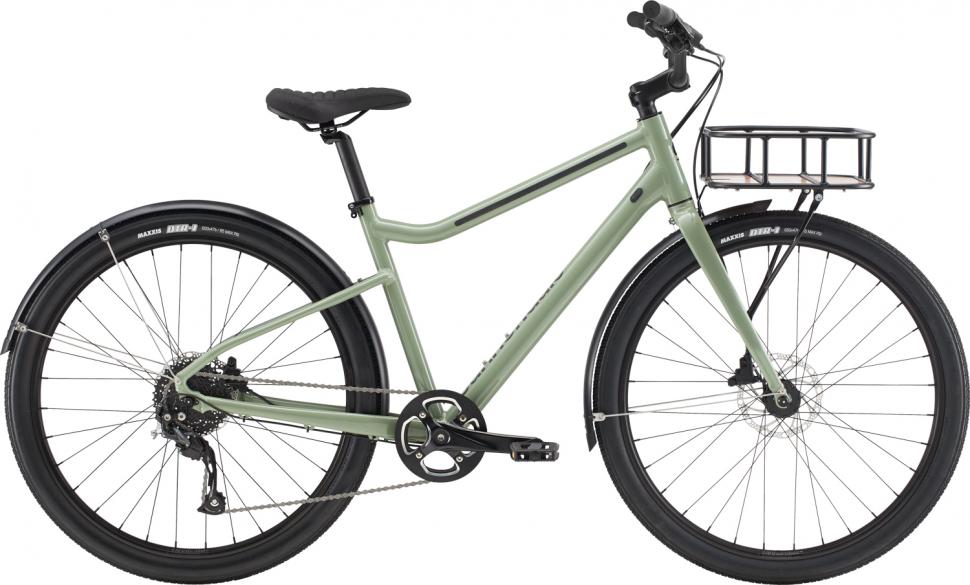 When the Funan mall opens in June, visitors will be able to cycle on a 200 metre-long path that runs through and around it. The Straits Times report that the path will have LED's that light up whenever it detects movement, and will mostly serve working professionals who cycle to their office during morning peak hours. During the mall's shopping hours between 10am and 10pm, however, cyclists will be encouraged to dismount.

It's claimed to be a "first-of-its-kind indoor cycling path"; we're not sure if that means in the entire world or not, but we don't know of any other examples. If you do, feel free to let us know in the comments...

Shame about that knackered old bike though Bradders, don't you know it's all about the F12 now?

The tweet translates as "They've changed name, but the popularity of Team Ineos on Italian roads remains very high."

Meanwhile, the latest test bike getting reviewed at the moment is this Merida Reacto Disc 4000. It's a lot of bike for £2,000, but will it have the performance to match the looks? Review is coming soon

The most useless profile sticker i have ever seen. pic.twitter.com/ZgPDohgbm8 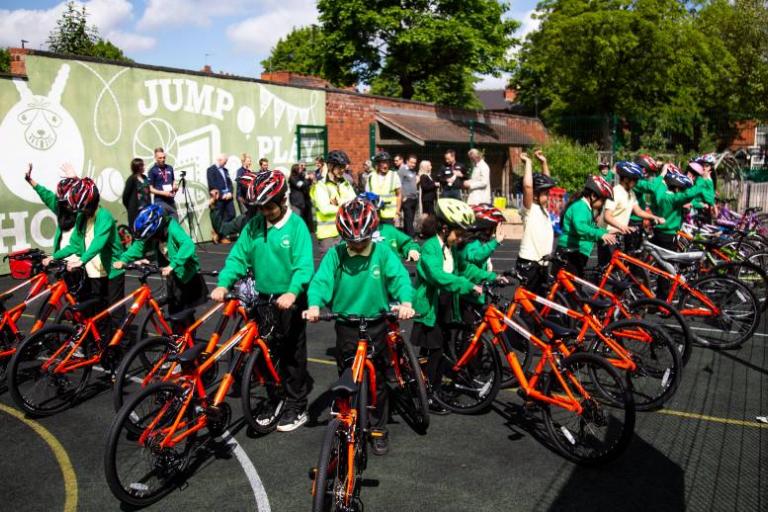 British Cycling and HSBC have begun distributing 600 free bikes to underprivileged kids in Birmingham with the help of Birmingham and West Midlands cycling and walking champion, the former BMX and track cycling world champion Shanaze Reade.

Under the scheme, which is being delivered by The Active Wellbeing Society, children will also receive a bike a bike pump.

Reade said: "Initiatives like this are fundamental to ensuring that children – regardless of who they are or where they come from - are given the opportunity to learn how to cycle.

“It’s easy to forget that a lot of kids simply don’t have access to a bike and schemes like this help to break down these barriers and ensure that cycling is something that can be enjoyed by all, no matter what your background.

“There are so many benefits to riding a bike – from physical and mental health, to the environment – and by providing hundreds of free bikes and equipment to children across the city, HSBC UK and British Cycling are contributing towards a healthier, fitter and greener nation which is something that should be applauded.” 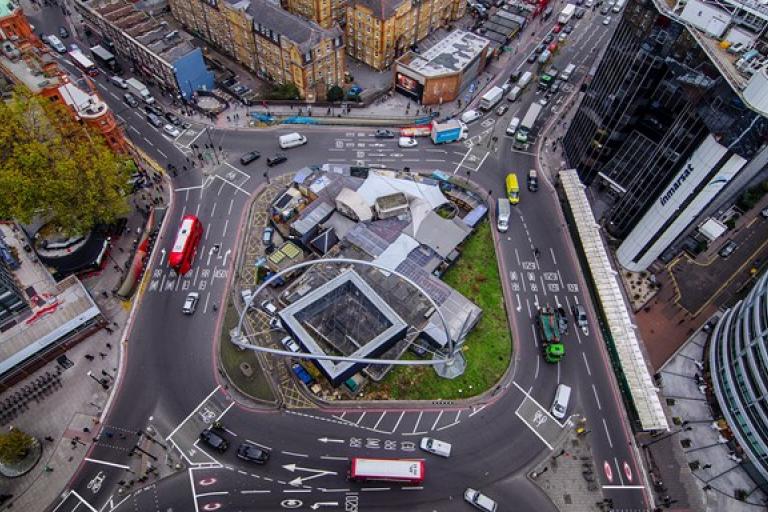 London's Old Street roundabout will switch to two way traffic next week as part of the overhaul of one of the capital's most dangerous junctions by Transport for London (TfL) and the boroughs of Islington and Hackney.

Nick Fairholme, TfL’s Director of Project and Programme Delivery, said: “Our work at Old Street will transform journeys for thousands of people in the area and make it much easier and safer to walk, cycle and use public transport.

The road layout will switch to two-way traffic from 0001 on Monday morning.

"The switch to two-way traffic is a major milestone for the scheme and some road closures and changes to travel are needed for work to progress. I’d encourage everybody in the area to take extra care as traffic gets used to the new road layout.”

"The current layout is unsafe and we’ve seen some really horrible collisions happen there over the last few years.

"People walking and cycling should not feel like they are taking their lives into their hands when travelling through Old Street.

"At RoadPeace we see the devastation that road danger causes, and welcome TfL’s commitment to addressing it.”

It's a flat 145km stage today, which should mean a battle between the sprinters at the finish line in Modena. Barring a miracle/disaster Primož Roglič will still be in the Maglia Rosa at the start of stage 12 tomorrow, where things are about to get hilly.

To the driver who paid £22,000 for a "MR BIL" number plate so he could tailgate, catcall and deliberately close pass a female cyclist. Your memorable reg number means I can now report you! Kind regards

Plus hopefully a bit more in the form of a fine and enough points to get this idiot off the road. 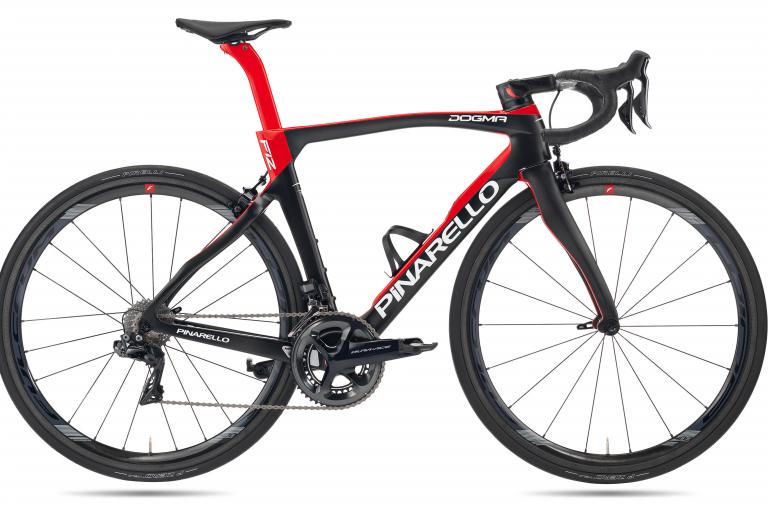 Just a short while after launching the latest Dogma F12, Italian company Pinarello has unveiled the even lighter Dogma F-12 X-Light and Dogma F12 Disk X-Light via the UCI’s list of approved equipment.

We don’t have any details about these new bikes yet, but we have asked. All bike companies that want their bikes used by WorldTour professionals must pay to get their bikes approved by the UCI, and this process means new bikes often get revealed ahead of any planned marketing material by the company.

With the last Dogma F10 X-Light, the frame was 60g lighter than the regular model due to using a higher grade of carbon fibre with a lower resin content, along with a new layup and new dedicated moulds. Could we see similar weight savings on the F12 Dogma X-Light?

The new bikes were only just approved on the 17th May 2019. More details when we get them.

Cycling turns a person into a philosopher.
In this you can just hear me saying, "What is the point?" over and over again.
The last time I was this close to so much heavy metal was at a Motorhead concert. pic.twitter.com/eHKvKG9c7x

The presenter and broadcaster has published enough criminal driving for a feature length film over the years on social media, and his latest involves a lorry that overtakes him on Shaftesbury Avenue as a bus and a van are coming the other way. Vine then catches up with the lorry at a later junction, who appears to have saved all of no seconds by making the dangerous manoeuvre. No word on identification of the driver yet, but the plate appears to be visible from the footage.

I do not condone the lorry driver but I do believe when being overtaken you (the vehicle/bicycle) should slow down to allow vehicle overtaking you safely and quickly
Yes, dangerous though

Still some in the comments tried to suggest that the incident could have been avoided, with the one above being particularly unpopular.

6hrs with the lads, on his 34th birthday. Sure Froomey wouldn’t want it any other way pic.twitter.com/NLlzgP26AK

How much does Froome want a fifth Le Tour win? A six hour ride on his 34th birthday, that's how much. Team Ineos are out in Majorca on a training camp in prep for their assault on the Tour de France, although it looks like they backed off on the intensity a little yesterday with time to take so many selfies...

A beautiful day riding above the clouds pic.twitter.com/xO5CKdTai1

...over on off.road.cc, here's Danny Macaskill being Danny Macaskill, this time putting his own unique spin on babysitting. It's wracked up over a million hits on YouTube in a little over 24 hours, watch this four minutes of pure joy and you'll see why!