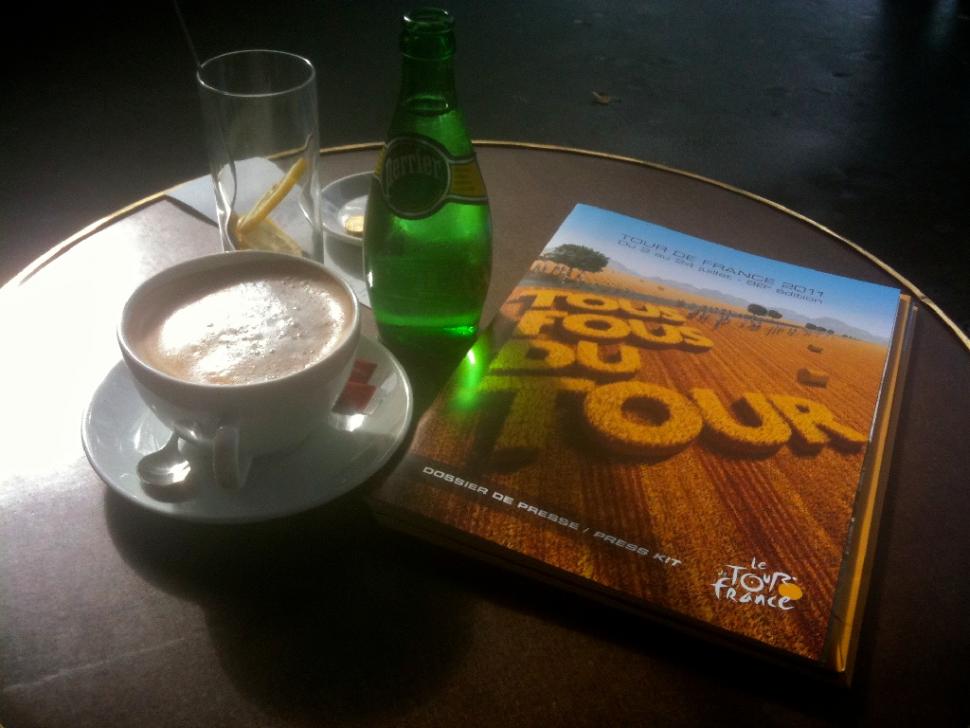 All the details of next year's race in glorious technicolour (but Perrier and coffee not included)...
by Simon_MacMichael

Well, tiffin - or more appropriately in keeping with the theme, a cafe au lait - has been taken and the random number generator coaxed off the picket line outside a French fuel depot, and the winner is Damien Worrell, who said "Je veux un! pretty please!", and he'll soon get to practice his French alongside the English translation in the press kit which will be winging its way to him just as soon as he lets us have his address.

Thanks to everyone for the comments including those who entered into the spirit of things by making their comments in French, and if you didn't win, keep looking out for more schwag grabs here on road.cc!

One of the week’s big stories was Tuesday’s launch of the route of next year’s Tour de France, and in between snapping the riders we also managed to get our hands on a spare press kit which one lucky road.cc user stands to win, but you’d better be quick because we’ll be drawing the name this afternoon!

The press kit comprises a 44-page, full colour bilingual French and English guide to the 2011 race including the lowdown on the route, with descriptions of each stage including the start and finish towns, as well as profiles of the mountain stages.

You also get the official 2011 Tour poster plus a similarly-sized map of the entire route, a smaller A4 route map with details of each stage on the reverse, and – we feel that this is the clincher – a handy 4-page guide to all of the Tour de France’s partners and sponsors, including their logos. Nice, eh?

It’s another eight months or so before any of the guides to next year’s race, official or otherwise, hit the news stands, so to stand a chance of getting your hands on all the details before anyone else, just leave a comment below and we’ll draw the winner’s name this afternoon.

Unfortunately, the grand crème and Perrier shown in the picture aren’t included - the picture was taken on the terrace of a café close to the Champs-Elysées, and the road.cc schwag budget only stretches so far…