road.cc mixes with the stars at the Tour de France 2011 Presentation (+ picture gallery)

It's a tough job… but Simon drew the short straw and headed off to Paris, poor fella...
by Simon_MacMichael

While last weekend saw Philippe Gilbert win the last big race of the 2010 season, the Giro di Lombardia, the cycling year is never quite over until the route of the following July's Tour de France has been announced. Together with some of the sport's biggest stars and the massed ranks of the press we were in Paris on Tuesday to find out all about the itinerary of what will be the 98th edition of cycling's biggest race.

Happily, Eurostar was entirely unaffected by the strikes and fuel shortages gripping France, and the suggestion from TV news reports that arrival in the French capital would be greeted by hordes of latter-day soixante-huitards fighting the CRS on the boulevards proved wide of the mark. To tell the truth, there was more chaos outside the Kings Cross hotel that provided a base the previous evening ahead of getting the first train out of London in the morning.

Indeed, once in Paris, the only thing that seemed in danger of being stormed on the way to the Palais des Congres was the Louis Vuitton store on the Champs-Elysees as handbag-hungry tourists waited impatiently for the doors to open, and while there was little sign outside the 1970s-built  convention centre that the unveiling of sport's biggest annual event was scheduled to take place inside, a Cofidis team car, bereft of bikes on the roof rack, rolled up as confirmation that this was indeed the right place. Inside the main 3,700-seat ampitheatre that in the past has hosted the French Oscars, the Césars, as well as the 1978 Eurovision Song Contest, there was a relaxed, almost end-of-term air, although of course one absentee, Alberto Contador, loomed large over the proceedings, and not just when he appeared on the big screen, standing in the maillot jaune in front of the Arc de Triomphe just three months ago.

Just 12 months ago, the Spaniard as defending champion had sat front and centre in accordance with convention to watch the route of this year's race unfold; the Astana rider had already signalled that he would miss this week's event pending a decision on what will happen to him following his failed test for clenbuterol during this year's race.

Whether or not he'd been asked to stay away by organisers ASO is unclear, but they certainly made it clear that they're unhappy with the length of time it's taken the UCI to announce its decision in the case, and in the meantime it was this year's runner-up, Andy Schleck, sitting next to brother Frank, who got all the media attention that would normally be accorded to the current champion. 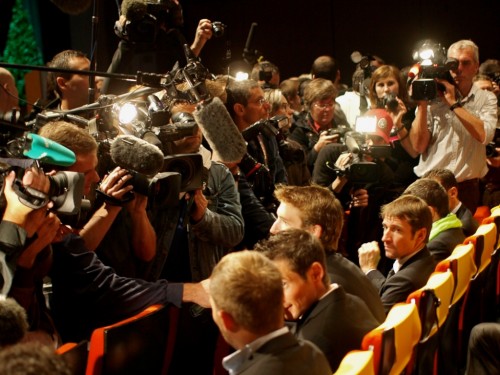 In the absence of Alberto Contador, Andy Schleck was the centre of media attention

El Pistolero may have been absent, but the winners of the year's two other Grand Tours were there, the Liquigas-Doimo pair of Ivan Basso and Vincenzo Nibali, and they could provide one of the big sub-plots of next year's race, with the Italian team eager to add the Tour de France to complete the set. 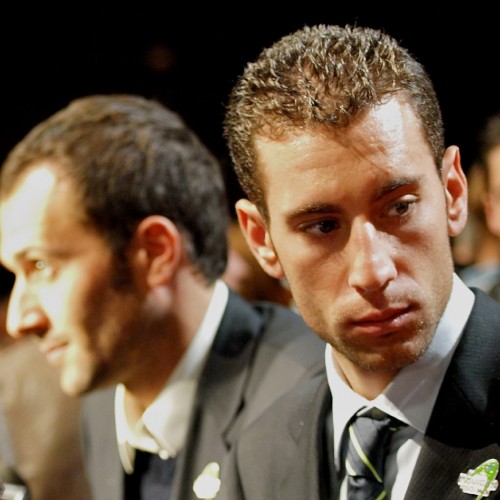 Also there in the front row were newly-crowned World Champion Thor Hushovd and the man who has already targeted taking that title off him in Copenhagen next year, Britain's own Mark Cavendish, enjoying a joke as they took their places. The Manx Missile also has clear ambitions for the elusive maillot vert next year, and while in the sprint stages Hushovd will most likely help lead out new Garmin-Cervelo team mate Tyler Farrar, a shake-up in the points system means he will also have his sights on winning back the green jersey. 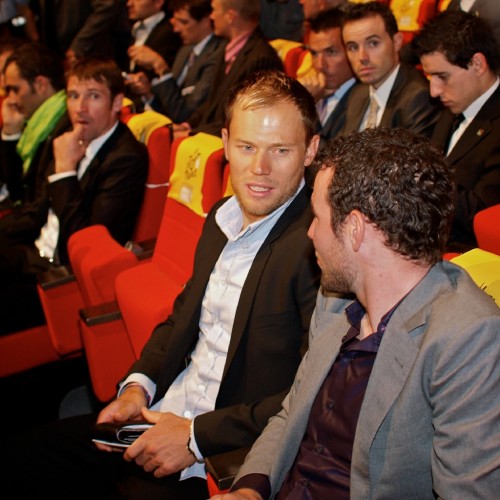 Thor Hushovd and Mark Cavendish catch up with each other

The main proceedings began with a tribute to two-time winner and Paris native Laurent Fignon, who died last month, moving on to a look back at this year's race, starting with that fateful moment on the Port de Balès when Andy Schleck's chain dropped and Alberto Contador rode away into the yellow jersey.

That made it clear that whatever their thoughts in private over Contador's absence, and whatever decision the UCI makes, there was no question of ASO ignoring the man whose name currently stands next to the year 2010 in the list of Tour de France winners.

Who knows, though, the thoughts that must have gone through Andy Schleck's mind as he watched that moment replayed on the big screen, as a botched gear change saw him lose his grip on the yellow jersey?

Certainly, many present must have reflected that had Contador not ridden away to take the overall lead that afternoon in the Pyrenees, he wouldn't have faced a routine drugs test as the maillot jaune two days later. Andy Schleck, for now at least the runner-up in the 2010 Tour de France

After that, it was on to the 2011 route, starting with a lengthy introduction from the president of the regional council of the Vendee, which hosts next year's Grand Depart - a bit of a diversion from the cycling, but a reflection of the hard fact that it costs serious money to stage the opening days of the race, and the decision to do so needs to be set against a potential return on investment from tourism and commerce.

From there, the itinerary continued pretty much as had been widely anticipated, the showpiece battles in the Alps receiving star billing including the double ascent of the Galibier, with a short film showing Bernard Hinault tackling the climb, which celebrates the centenary of its first inclusion in the race next year, together with one of his sons. Afterwards, as they had been before the lights dimmed to signal the start of the presentation, the stars were on hand to be filmed and interviewed by the press and to pose for pictures, sign autographs and spare some words for their fans, something that's difficult to imagine happenining in the launch of any other sporting event of this stature - no velvet ropes or media passes dangling from the neck here, just a well-mannered melee, and one who did more than most to make himself available to the media and public alike was Mark Cavendish. 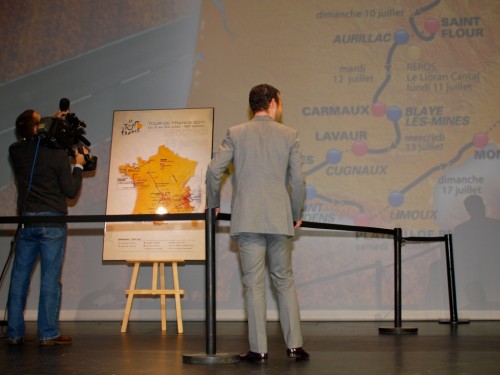 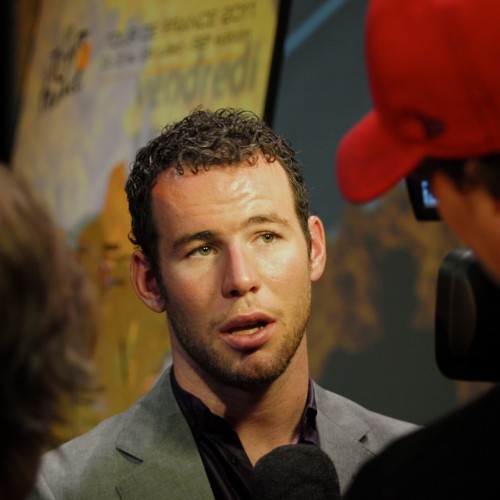 It wan't just the riders, press, fans and organisers up there mingling on the stage, either - it would be impossible to stage the Tour de France without the willingness of politicians and the business community of the towns and cities that host stage starts and finishes to commit resources to hosting the event, and here, sporting badges that stated simply the name of the place they represented they had the opportunity to point their finger at the map for a picture that would doubtless end up in the local paper back home. And that pretty much wrapped it up, the rows of empty seats waiting to be relieved of the Tour de France-themed head covers in preparation for the auditorium's next event, while the great and the good headed off for lunch at a nearby hotel - although members of one French team which presumably didn't have enough invites to go around were spotted huddled over the route map in a Bar Tabac just down the road.

On the way out, though, with road.cc's users never far from our mind, we did manage to nab an extra press pack, including full details of the race including mountain stage profiles and details of all the stage towns, a map of the route, the 2011 Tour de France poster and a handy guide to all the official sponsors and partners of the race, and we'll be putting that up as a cheeky schwag grab later on, so keep your eyes peeled for that very soon. Sadly, the grand creme and Perrier don't count as schwag, but the press pack does!