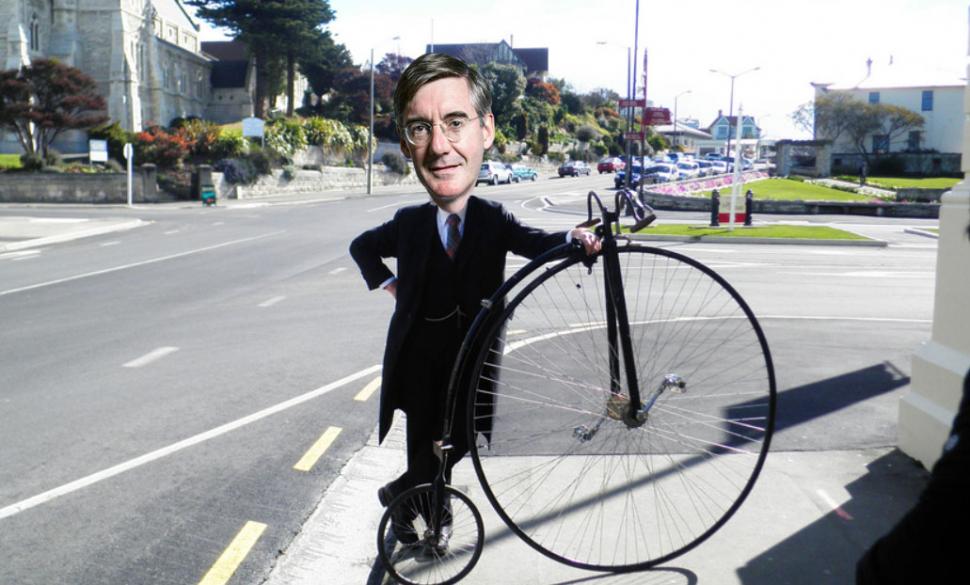 Alan Price claims the UK's 35 million (?) cyclists and motorcyclists "are massively in support of Brexit"...
by Simon_MacMichael

A penny-farthing rider from Battersea who hopes to be a candidate for the Brexit Party has begged its leader, Nigel Farage, to be given a job as the party’s spokesman to represent the views of fellow enthusiasts – as well as cyclists and motorbikers more generally.

65-year-old Alan Price – a past Conservative voter who describes his political views as “slightly to the right of Genghis Khan” –   arrived at a press conference for the party on his penny-farthing, reports The New European.

Farage founded the party earlier this month after the continued postponement of the date the UK is due to leave the EU meant that the country will go to the polls next month for the European parliamentary elections.

Candidates confirmed as standing for the party include Annunziata Rees-Mogg, the sister of the Conservative MP and leader of the Tory backbencher pro-Brexit European Research Group, Jacob Rees-Mogg (pictured above).

Price, evidently, has done his own research – although perhaps surprisingly, it doesn’t stand up to close scrutiny.

He claimed that the EU had “harassed and excessively regulated” the “35 million” people in the UK who choose to get around on two wheels.

Analysis of government statistics by Cycling UK suggests that figure may be a slight exaggeration. In 2017, 6.1 million people in Great Britain cycled once a week or more, a further 3.1 million at least once a month, and 5.3 million less than once a month.

That gives a grand total of 14.5 million – equivalent to 28 per cent of the population – and it’s highly unlikely most would consider themselves “cyclists.” Meanwhile, more than two thirds of the population never cycle.

As for motorcycles, only 2 per cent of households nationally have access to one.

Besides that slight quibble over statistics, Price claims to speak for everyone who gets around on two wheels, powered or otherwise. “We as a group are massively in support of Brexit,” he trumpeted.

Hoping to be approved as a candidate for the Brexit Party in the forthcoming elections, he said: “Democracy has failed to work because we voted out and we want out.

“I have a personal interest in excessive taxation and bicycle tyres but there are also plenty of other laws about kettles and everything else.”

Including bendy bananas, at a guess.

“I'm excited now that democracy may rule in the UK because it clearly has not been ruling in recent times,” he added.

Touching as his plea to represent cyclists and motorbikers – and, yes, penny-farthing riders – is, he may wish to check the cycling policies of UKIP, the party Farage previously led.

In its manifesto for the 2010 general election, the party claimed that it “supports pedal cycles as a healthy means of personal transport.”

But while it said that “there needs to be a better balance of rights and responsibilities for pedal cyclists,” the focus was very much on the latter – it insisted there was “too much aggressive abuse of red lights, pedestrian crossings and a lack of basic safety and road courtesy.”

One solution it suggested was for cyclists to be required to have third party insurance combined with compulsory bike licensing in the form of a “Cycledisc.”

It also said it supported “provision of cycle parking at reasonable charges,” as well as compulsory training for cyclists, and for riders to be forced to dismount at “busy roundabouts, junctions or bus lanes, or where the road would be too narrowed by cycle lanes and cause unacceptable delays to traffic.”

1
Noel Gallagher says the only downside of cycling is "the f***ing helmet"
2
Near Miss of the Day 451: Driver flirts with head-on collision to get to red light slightly sooner
3
Canadian woman who boasted of drunk driving before killing cyclist is again jailed for drunk driving
4
Fabio Jakobsen out of coma as team mulls legal action against Dylan Groenewegen
5
Near Miss of the Day 450: Crap driving, embarrassed accelerating away
6
Thief who targeted high value bikes banned from town centre
7
Police appeal after three cyclists killed in Cleveland area in less than a fortnight
8
Near Miss of the Day 448: Transit van driver in very close pass