More than 6,000 people have signed a petition for a velodrome to be built in Birmingham ahead of the 2022 Commonwealth Games.

The city was awarded the event in 2017 after the original host city, Durban, pulled out of staging the multis-sports event for financial reasons.

Birmingham’s successful bid was based on using existing venues such as the Alexander Stadium for athletics and the National Exhibition Centre for boxing, judo, table tennis and freestyle wrestling.

But the track cycling events are due to take place 130 miles away, at the Lee Valley Velodrome in London - whicch, by pure coincidence, has a capacity of around 6,000 people.

The petition will be handed to Ian Ward, leader of Birmingham City Council, on 15 April.

David Viner, who organised the petition, said: “The Commonwealth Games are going to be a superb opportunity for Birmingham and the West Midlands but it is such a shame that the track cycling is to be held in London.

"The new aquatics centre in Sandwell with 5,000 seats for the Games and retaining just 1,000 seats afterwards is a perfect example of how a competition velodrome arena, costing £35m, with a similar seating plan could have been built for 2022.

"Councillor Ward has an open mind and has engaged with us. Now we hope the feasibility plan will prove there is a strong case for a modest training and development velodrome arena, with room in the track centre for multi-community based sports including disabled and sight impaired sports.

"We have benefited from firm support from many local people and we thank every person who has supported the petition.

"We have velodrome experts on hand and there is still time to get the velodrome built in time for the Games,” he added.

"I think it is important that our campaign is viewed as working with Birmingham City Council to get a velodrome and get a great legacy. The campaign is not just a protest."

Lucky I haven't been cycling recently - a robin is nesting in my bike helmet. It's a Crystal Maze for a robin to get inside our garage but she's rearing four chicks. pic.twitter.com/PN467uJJr9

Let alone gathering dust; it turns out writer Patrick Barkham's helmet has been gathering a family of robins during his cycling hiatus. Mum and chicks doing well apparently, a special(ized) moment indeed. Also, it's quite fitting that he tweeted about it. I'll get me coat...

Although as some have already pointed out on social media... was it really the wheels that deserve all the plaudits? The rider Alex Paton might have something else to say about it! Full story here in any case.

Lionel Scaloni, the coach of Argentina's national football team, has reassured his followers on Twitter that he is okay after he was knocked off his bike by a driver while cycling on Mallorca, where he has a home.

Initial reports were that the former Deportivo La Coruna (and briefly West Ham United) player was in a "serious condition" in hospital, but the 40-year-old tweeted to 5hank people for their good wishes and to say that he is on his way home from hospital after having a couple of stitches put in a facial wound.

It’s bold, it’s blue, it’s the new traffic-free cycle route along the A34 between Birmingham city centre and Heathfield Road in #Lozells. And it's now largely OPEN, so why not give it a go? #BCR #Cycling pic.twitter.com/Qfph840YD6

A notoriously sketchy stretch of A-road in Birmingham now has a designated cycle route segregated from traffic, described as 'largely open' by Waseem Zaffar, Councillor for the Lozells area of the city.

Froome sat down with Rosberg to talk through his career and notable victories in detail. Some interesting comments about his support of Bradely Wiggins between 15:30 and 19:00, and the whole 50 minute podcast is definitely worth spending your lunch break on. 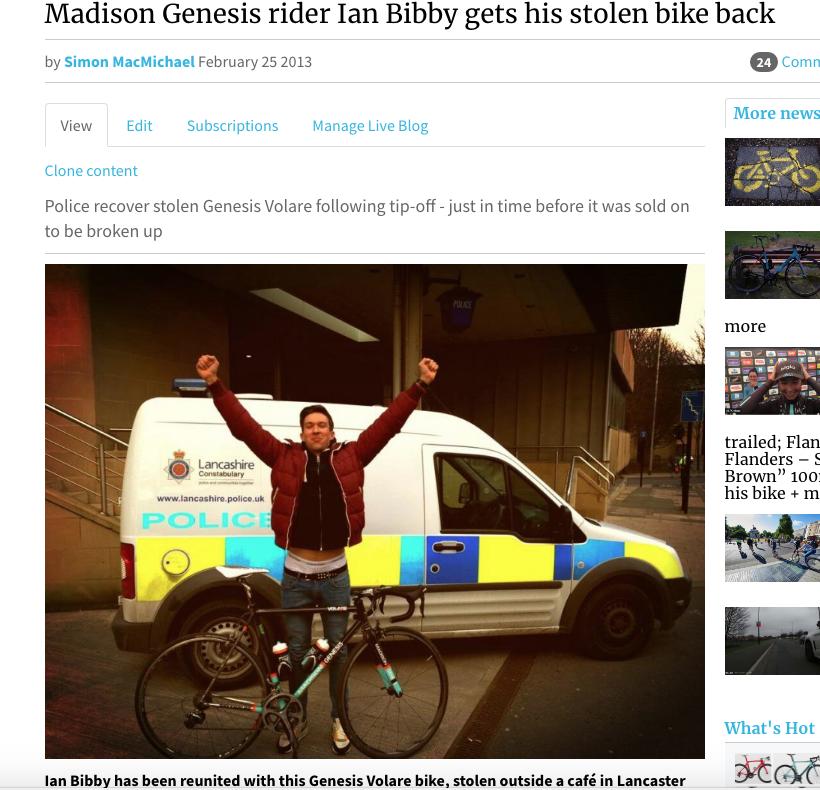 In a cruel case of bad luck striking twice, Bibby had a Genesis Volare stolen from him during his previous stint at Madison Genesis back in 2013 - he did get it back that time though, just before the £7,000 bike was about to be sold on for £2,500.

He'll be hoping for a similar result this time around, after sharing CCTV footage of the offender outside his house before stealing the bike from his garage.

Not the best photo but if anybody recognises him please get in touch pic.twitter.com/yaqgfI0No0

The bike is very distinctive with team colours and a super slammed stem, so with any luck Bibby's bike will be too hot to handle for the bottom feeders who stolen it. With a position like that hopefully the thief will end up with some pretty bad back and neck problems if he/she attempts to ride it...

09 April 2019, 07:24
London Ambulance Service say they can save "vital seconds" arriving to an emergency by bike

One benefit of attending to patients on a #bicycle is that we don’t unload kit from a vehicle, instead we go straight to patients, saving vital seconds in an emergency.

Here’s Jayden, showing how it’s done, making his way through the corridors of the #PalaceofWestminster pic.twitter.com/1lQMshQmUZ

By cycling to an emergency the first responders don't have to spend time unpacking an ambulance vehicle.