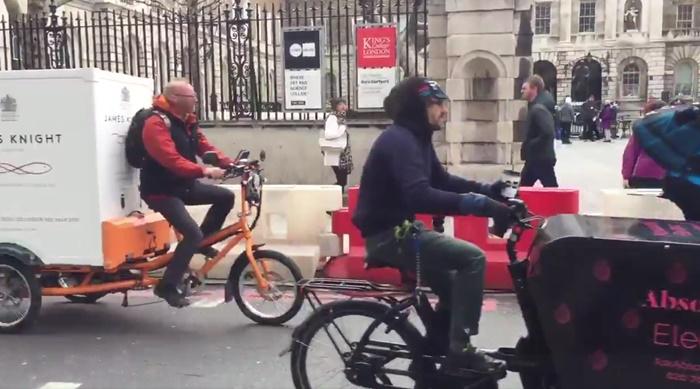 The London Bridge Business Improvement District (BID), known as Team London Bridge, is to offer firms in the area a subsidy to encourage them to use cargo bikes for deliveries instead of motor vehicles.

Lorries and vans now account for around a fifth of London’s road traffic with the rise in large part being driven by online sales.

Launched yesterday, and supported by Transport for London (TfL), the Bikes for Business programme will help companies identify which bicycle services are best suited to their needs and it will then recommend operators.

The move comes ahead of the introduction of the Ultra Low Emission Zone (ULEZ) on April 8. Cargo bikes and e-cargo bikes will be exempt from the charges.

A recent study carried out by Team London Bridge found that 23 per cent of London Bridge businesses currently use bikes for deliveries, but 87 per cent would like to use them more.

In a statement, Team London Bridge CEO Nadia Broccardo, said: “The introduction of ULEZ and our Bikes for Business subsidy is a real opportunity to rethink how best to move freight over short distances in the capital. From groceries to medical supplies, cargo bikes can help businesses cut costs and journey times, as well as pollution that is blighting life in London.”

Guy’s Hospital, which lies within the BID, is to trial cargo bikes in partnership with its pathology provider, Viapath.

In February, TfL trialled cargo bike deliveries to a Crossrail site at Whitechapel using cycle lanes instead of a van. According to London cycling commissioner, Will Norman, the bikes were twice as quick as vans.