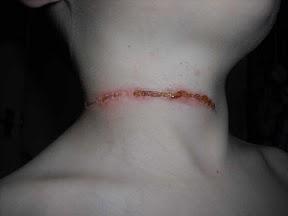 Almost every one of us will have our own tale to illustrate the fact that unleashed dogs and moving bikes don’t mix.

But with the advent of extendable leads, even a dog that is ostensibly under control can be a danger to cyclists as a horrific incident involving a boy in Lancashire has demonstrated.

The child, 6-year-old Isaac Hargreaves from Morecambe, was riding close to his home in a cul-de-sac when he pedalled into the lead which was extended to such an extent that the dog was on one side of the road and the owner on the other.

Isaac was caught by the lead at upper chest height, causing a severe friction burn to his shoulder and neck before he fell off the bike, bruising his back

Lancaster City Council, which also covers the Morecambe area, has released a picture of the neck injury to illustrate the dangers of extendable leads. The boy’s father, Darren, also talked to them about the incident which happened during the summer.

"I have always regarded our small, quiet cul-de-sac to be a safe place for children to play," he said "Isaac loves to ride circuits of the road with his brother which is why I thought it was unusual to hear him crying that day. I ran out to find him walking towards me from where the incident had occurred, just metres from my house, with terrible burn marks on his chest and neck.

"Isaac had cycled round a bend in the road and straight into an extendable dog lead. The owner of the dog was on one side of the road and the dog was on the other when the accident happened. The lead appeared to have caught Isaac's shoulder and moved up to his neck as he fell backwards.

"If he hadn’t been wearing his helmet which had cracked on impact, his injuries could have been far worse. Thankfully, Isaac has fully recovered but as a parent, it saddens me to think my beautiful little boy will have to bear the physical scars for the rest of his life."

Council dog warden, Alison McGowan said: “This is not the first time we have witnessed rope type burns as a result of someone using this type of lead and as a service, we would never recommend people use them on the highway when dogs need to be kept under close control.”

Perhaps you've had your own accident or near-miss involving this type of lead, if so let us know below.