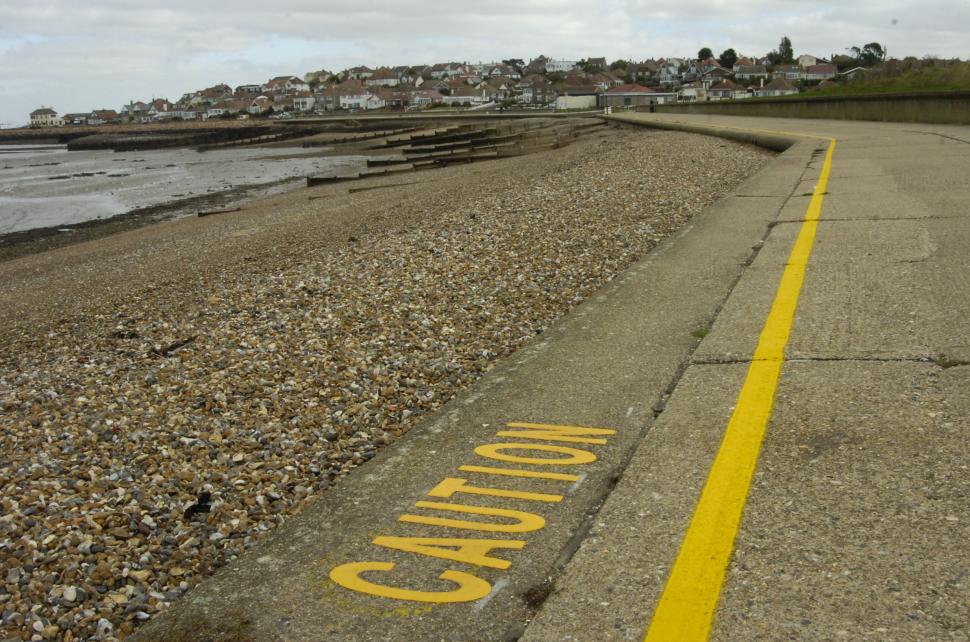 The battle lines have been drawn in Kent over, well, a line, the Herne Bay Times reports.

The offending yellow stripe runs for miles along the promenade in Herne Bay, apparently in order to stop cyclists who use this section of the Oyster Bay Trail cycle route from riding off the edge of the prom and onto the beach.

In what’s looks like a classic “health and safety gone mad” versus “never underestimate the public’s stupidity” style disagreement, objectors are equating the painted line to an act of vandalism while council bosses insist it is a legitimate safety measure.

Herne Bay resident Pete Jennings told the newspaper: "It is an insult to cyclists.There are also signs warning cyclists to take care and I have no problem with those, but I would imagine most cyclists would be offended the council considers them so stupid they would ride bikes over the edge of a sea wall.

"The promenade has been used by cyclists ever since it was built and I am not aware cyclists have often, if ever, come to grief in this way.

"The way they have done this seems so brainless – there are even areas of hatching by slopes or steps down to the beach to warn cyclists that if they ride over them they will end up on the beach."

Mr Jennings, who is planning to raise the issue with police and councillors, also objects to the unsightliness of the line.

"It dominates the walk from Hampton to Long Rock and has a more unpleasant effect than any graffiti," he said.

But council spokesman Rob Davies told the Times that the work was part of the Oyster Bay Trail cycle route, which involved amending the bylaw to allow cycling on the prom.

He said: "With this official designation comes a responsibility to ensure it is as safe as possible and that all risks are considered in an appropriate manner.

"At certain times of year, the drop from the promenade to the beach can be as much as 1.2 metres, so we had a duty to provide a visual indication of where the edge is, particularly if cyclists use the promenade in the evenings or when visibility is poor.

"The council looked at installing railings along a considerable length of the promenade, but decided against it due to the visual impact and the cost.

"The yellow line is a compromise, providing the right balance between visual impact and the safety of users. It is no different to the yellow lines on train and Tube platforms."