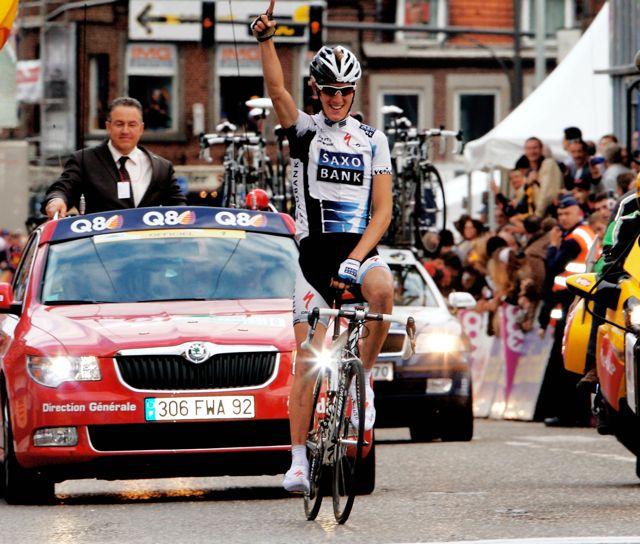 There may still speculation over the final make-up of its rider roster, let alone the headline sponsor and name of the team, but further pieces of the jigsaw that is the Luxembourg Pro Cycling Project have fallen into place today with the announcement of three assistant team managers, two of whom, like the outfit’s marquee signings the Schleck brothers, join from Team Saxo Bank.

There may still speculation over the final make-up of its rider roster, let alone the headline sponsor and name of the team, but further pieces of the jigsaw that is the Luxembourg Pro Cycling Project have fallen into place today with the announcement of three assistant team managers, two of whom, like the outfit’s marquee signings the Schleck brothers, join from Team Saxo Bank.

Nygaard is hopeful of securing a ProTour license for 2011, and the team could start next year’s Tour de France with the defending champion in its ranks should Alberto Contador be banned and stripped of his title after testing positive for clenbuterol during this year’s race.

As for the three new managers announced today, while Schmidt and Michaelsen have a racing background, Guercilena came into the sport after graduating in medicine from the University of Milan, beginning his career as trainer and manager to the Mapei youth team before progressing to become trainer and directeur of Quick Step in 2003.

“We are very lucky to have attracted Luca Guercilena to this team,” Nygaard explained. “With his background and depth of knowledge on the sporting as well as physiological level, he will have a huge impact on the success of the team. Luca was one of the first people I had in mind when this team became reality and I’m thrilled to have him on board. To me, Luca really personifies a lot of what this team is about.”

“I have a lot of friends and good memories at Quick Step, so it was a difficult decision to leave,” said Guercilena. “Ultimately it was a professional decision because this new team interests me enormously and I am very motivated to work with the sort of general classification riders who will be on the team.”

“Today, it is normal for a team to have a directeur sportif who has a background in sports medicine and works as a trainer for the riders too,” he added. “But back then I think we were the first to have a trainer with the competence of a sports director.”

Guercilena believes that his background in helping develop young riders will prove an asset in his role with the new team. “I worked with junior racers first, and then with riders like Cancellara, Pozzato and Davis on the U23 Mapei team,” he revealed. “I enjoy working with young riders and seeing their development.”

“Our racing goals will be the same as just about every other top team: the Classics and the Tour,” he continued. “But for everyone the most important thing will be to have strong unity among the riders and a good image in the way we handle ourselves and our riders.”

Schmidt, meanwhile, arrives from Team Saxo Bank where he has worked as directeur sportif for the past three years. “I think it will be very exciting to have the chance to be a part of building up this new team,” he stated. “I am extremely happy to be included and anxious to set new goals for myself.”

With a number of key personnel including both riders and support staff at the new team also arriving from the Danish squad, Schmidt knows that he will be surrounded by familiar faces, which was part of the appeal of the position.

“Even though it is a new team, I have worked with many of the members of management and a few of the riders before, so we all know each other, know how we work well together and I am absolutely sure we will be successful,” the German added.

“Torsten is hands-down one of the best young sports directors in professional cycling and he was an obvious candidate for a leading role on the team. He has made the transition from rider to sports director in the best possible way and he has clearly shown the ability to lead a successful team regardless of whether it is racing a Grand Tour, a Classic or a smaller event,” commented Nygaard.

“Torsten wants to win, but he never deviates from the fact that a team needs to function on all levels from riders to staff working behind the scenes, and that will be an important part of this project,” he added.

Michaelsen was keen to point out that the new team provided an opportunity for those involved with it to make a positive contribution to a sport whose image continues to be tarnished by doping scandals.

“It is important for me that the people involved in this project have a passion for cycling and at the same time are reliable people that I would like to work with,” he said. “This team is composed of riders, staff, directors and managers who all have great experience in cycling and at the same time want to look forward and make cycling a solid sport, separating it from its troubled recent past and keeping it interesting and exciting for all fans everywhere.”

The Dane added: “I was a professional racer for sixteen years, so I hope that I can pass on my experiences to the greatest advantage for the riders. In life you can always learn. The fact that this team is composed of different people, with different nationalities and different mentalities will always stimulate me to observe and learn.”

“I’m very happy that we’re going to work with Lars,” said Nygaard. “He brings a professional attitude and a great set of human skills to this team. His meticulous attention to detail and his feel for racing will be a solid addition to our management,” Nygaard concluded. “Lars has an international outlook and I’m sure he will be a major part of our future success. It is key for me that we can combine the idea of being humble because we’re a new team with a winning attitude that reflects the fantastic group of people we have gathered.”

The news of the departure of Schmidt and Michaelsen will come as a further blow to Bjarne Riis, who has fought hard since the start of this year to put sponsorship in place for 2011.

As things stand, IT services company SunGard and Saxo Bank have now been put in place as co-sponsors for next year, although there have been rumours that the Danish financial institution may reconsider its position should Contador, who announced in August that he was joining the team, be banned.

It’s no understatement to say that Riis’s squad has been haemorrhaging personnel to the new outfit being created by Nygaard, his team’s former press officer who moved briefly to Team Sky before striking out on his own earlier this year.

Besides the Schleck brothers, who have already been confirmed as having signed for the Luxembourg Pro Cycling Project, other Saxo Bank riders expected to join them include Stuart O'Grady, Jens Voigt, Jakob Fuglsang and Anders Lund.