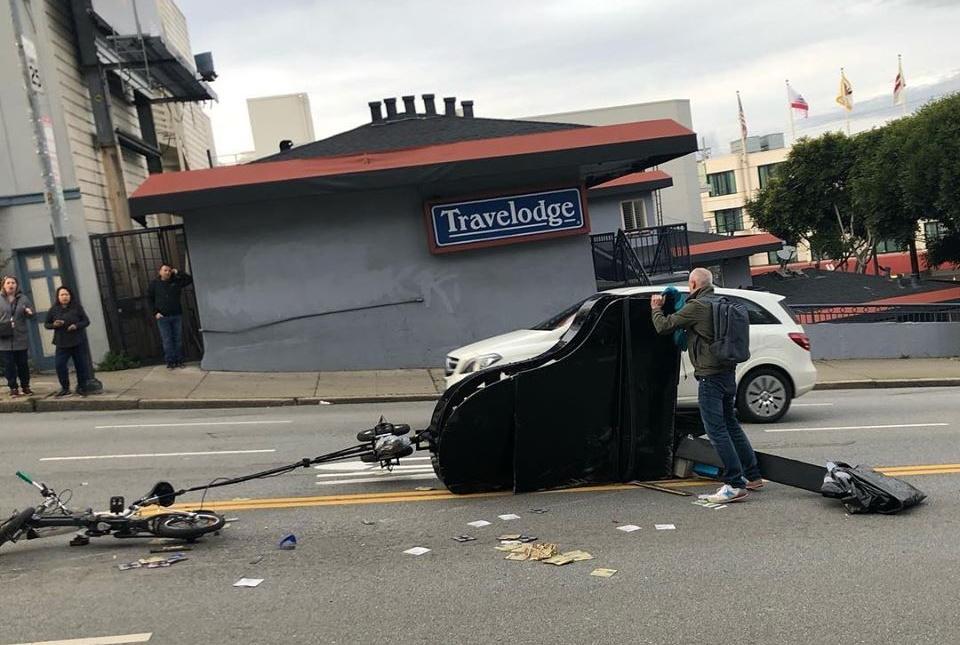 A pianist from Germany who tows his grand piano around by bike has suffered a spectacular (and doubtless noisy) crash in San Francisco. Davide Martello’s brakes were no match for the city’s steep roads, but he has since repaired the piano and performed last night.

In 2015, Martello towed his piano to the Bataclan Theatre in Paris to perform the John Lennon song Imagine in the wake of the terrorist attack.

More recently, he has been travelling and performing in the United States.

Unfortunately, things did not go well in San Francisco earlier this week.

Writing on Facebook, Martello said: “I’m very sorry San Francisco but your roads were too steep and I busted my piano really bad. I will keep you posted as soon everything is fixed. If someone in the area of San Francisco wants to help me out I would be very thankful. I was very lucky not to be injured or injure others... I only scratched an Uber car.”

He continued: “There was a German man who helped me out to get everything back inside my trailer. And I am very thankful that I’m still alive. Everything happened on Bay Street, the first hill I did it with no problems but the second one was deadly!

“Thank God I jumped right off my bike when I realized that I couldn’t handle it anymore and the speed got out of control. My brakes aren’t designed for San Francisco grades.”

However, Classic FM reports that he was first given a substitute piano by a shop in the city and he has since said that his own piano has since been repaired.