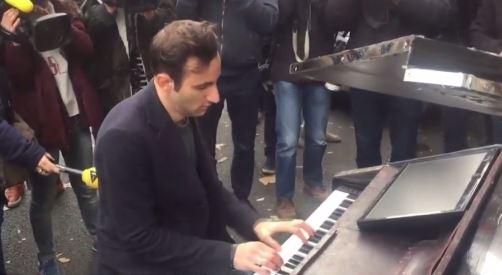 A pianist from Germany yesterday towed his bike to the Bataclan Theatre in Paris, where at least 89 people were killed in a terrorist attack on Friday evening, to play the John Lennon song, Imagine.

Davide Martello said he felt compelled to travel to the French capital after learning of the multiple attacks there as he watched the international friendly football match between France and Germany.

He drove to Paris, completing the final part of his journey by bicycle before playing the Lennon work close to the theatre in the 11th arrondissement targeted on Friday by ISIS terrorists during a concert by US band Eagles of Death Metal.

In a message posted to his Klavierkunst page on Facebook in the early hours of Sunday morning, he said: “Thank you for your mails. I just got back home in Germany safe and tired from a 24h drive.

“Everything started in a Irish pub in Konstanz while I was watching the soccer match between France and Germany.”

The match, played at the Stade de France at St-Denis in the northern suburbs of the French capital, was targeted by suicide bombers with three separate explosions outside the venue heard by those inside as the game was in progress.

At the same time, other venues across the city including bars and restaurants and the Bataclan Theatre were also being targeted.

“After I saw that insane violence I just followed my heart and went to Paris with my piano,” he added.

“This was one of my most touching moments in my life and I need to rest and reflect about what happened in this short time. I will respond [to] you as soon as I can, I hope you guys understand.”

Around 130 people have so far been confirmed as having been killed in the series of co-ordinated attacks in Paris.

According to the Guardian, Mr Martello, who performs in conflict zones around the world in an attempt to promote peace, visited the city in January to play his piano in the wake of the attack on the office of the satirical newspaper, Charlie Hebdo.

Twitter user Don Jacobson shared a picture he took of Martello in Paris as he cycled towards the Bataclan Theatre with his piano.

1
Cyclist's severed foot found on hit-and-run suspect's car as driver arrested
2
"They said give us the bike or we stab you": Another cyclist targeted by motorbike-riding muggers on popular route out of London
3
"Someone could be killed": Path users blame speeding cyclists for New Forest danger
4
Prominent transport author claims appointment of Chris Boardman as Active Travel Commissioner is part of "Great Reset agenda"
5
road.cc Recommends updated with 11 brilliant new products
6
Lone female cyclists are “being targeted”, says former Scottish champion
7
Cyclist killed after being struck by van driver during time trial
8
New Shimano 105 R7100 groupset goes 12-speed, Di2 and disc brake only