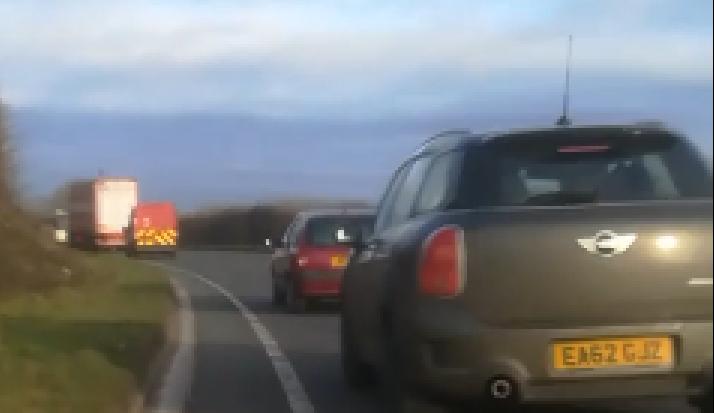 Near Miss of the Day 256: Cyclist records close pass – then runs into police red tape

Filming a close pass is one thing, but getting police to act on it means complying with any requirements regarding the submission of video evidence laid down by the relevant police force – as one road.cc reader has learnt to his frustration.

Ian told us that the incident in the clip below happened “at the end of a 64-mile ride and only 400 yards from home.

“A check on the GOV.UK website shows that the Mini was untaxed at the time of incident.

“The video was taken with a smartphone mounted on handlebars after I had an ‘aggressive pass intended to intimidate’ by a BMW driver on Saturday 9 February 2019 on the same stretch of road.

He said that the incident and video had been reported to police, but added: “Unfortunately you can only upload a video to Avon & Somerset Constabulary if the incident happened in the last seven days, you can provide a video showing two minutes either side of the incident, the video is timestamped, you are prepared to give a full statement, attend court if required and the video clearly shows the vehicle registration number.

“So, it would seem that Avon & Somerset Constabulary do not want to make it easy for a cyclist to report these incidents unless you can fulfil all criteria before submitting a video.”

While any action camera will give you the option to add a timestamp while recording, if you’re using a smartphone to take video it’s unlikely that your default app will have such a facility.

A solution might be to download an app that does and use that to record footage – one example being Timestamp Camera, which is available for both iOS and Android devices.

It's probably also a good idea to refresh your knowledge periodically about the specific requirements of the police force(s) responsible for the areas you typically ride in to avoid any pitfalls.

Near Miss of the Day
NMotD Somerset