It's also the only way of getting around that people are most likely to "strongly" disfavour...
by Simon_MacMichael

Cycling is the British public’s least favoured way to travel, according to a new survey which found that just four in ten people favoured getting around by bicycle, compared to 49 per cent who have an unfavourable view of it.

Moreover, among all modes of travel, cycling is the only one in which people were more likely to have a “highly unfavourable” rather than “somewhat unfavourable” view, at 29 per cent versus 20 per cent.

Men are more likely than women to have a favourable view of cycling, at 49 per cent versus 32 per cent.

That finding may well be linked to previous research we have covered here on road.cc which consistently shows that women are more likely than men to put off cycling on the road because they perceive it to be too dangerous.

The findings come from a newly published poll by consumer research organisation YouGov, who surveyed 1,737 people nationally and 1.068 people for a separate comparison survey covering London.

YouGov found that despite efforts to encourage cycling in the capital, including the Cycle Superhighways programme and the Santander Cycles scheme, Londoners were less likely to favour cycling as a form of transport, at 34 per cent versus 40 per cent nationally.

The survey also found that travelling by car as a passenger was favoured as a way of travel by around twice as many people who cited cycling, at 81 per cent. Meanwhile, 73 per cent favoured driving themselves.

Those came out ahead of public transport, where taking the train, at 67 per cent, was much more favoured than travelling either by bus or coach, at 47 per cent and 42 per cent, respectively.

Perhaps surprisingly, however, the top response was walking, favoured by 84 per cent of people – with only 11 per cent holding a negative view.

Bucking the national trend, Londoners were much more likely to support public transport options rather than taking the car, with only 44 per cent saying they favoured driving themselves, and 67 per cent citing travelling in a car as a passenger.

A number of factors are likely to lie behind that – the extensive public transport network in the city, the Central London congestion charging zone, the cost and difficulty of parking, and above all the fact that car ownership in London is well below the national average.

You can see the topline survey results below. 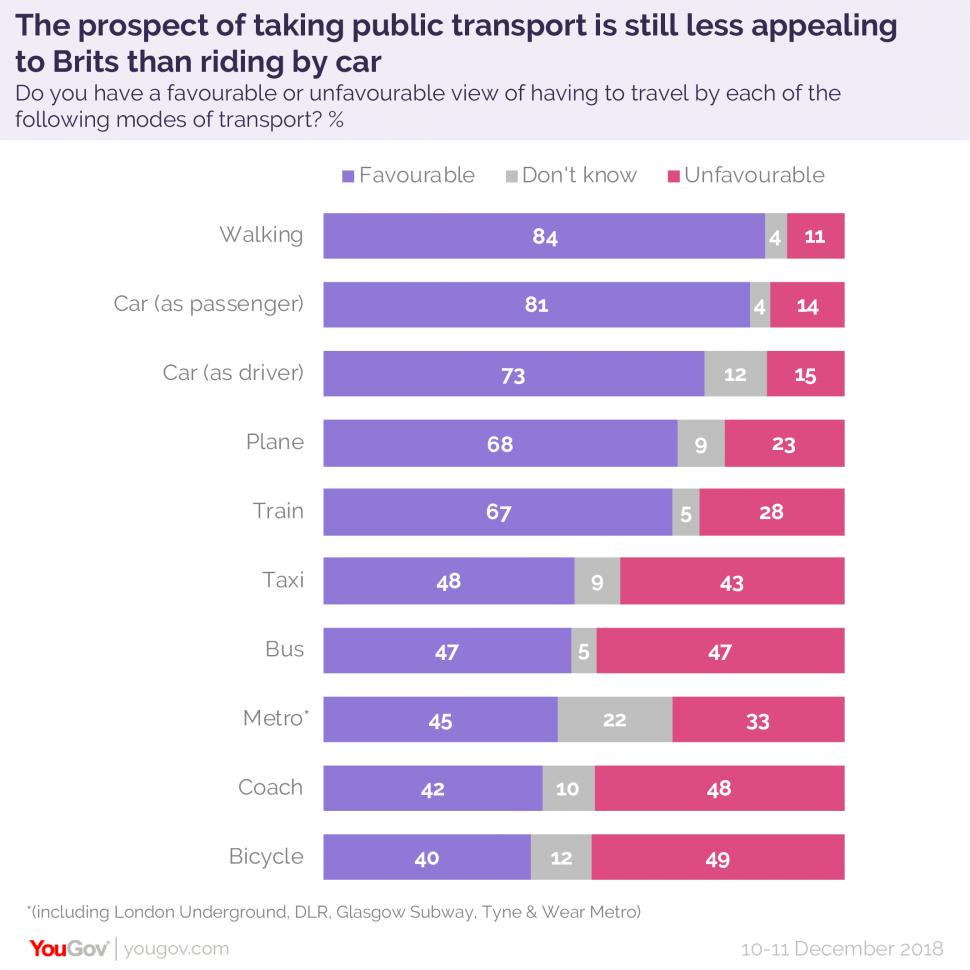