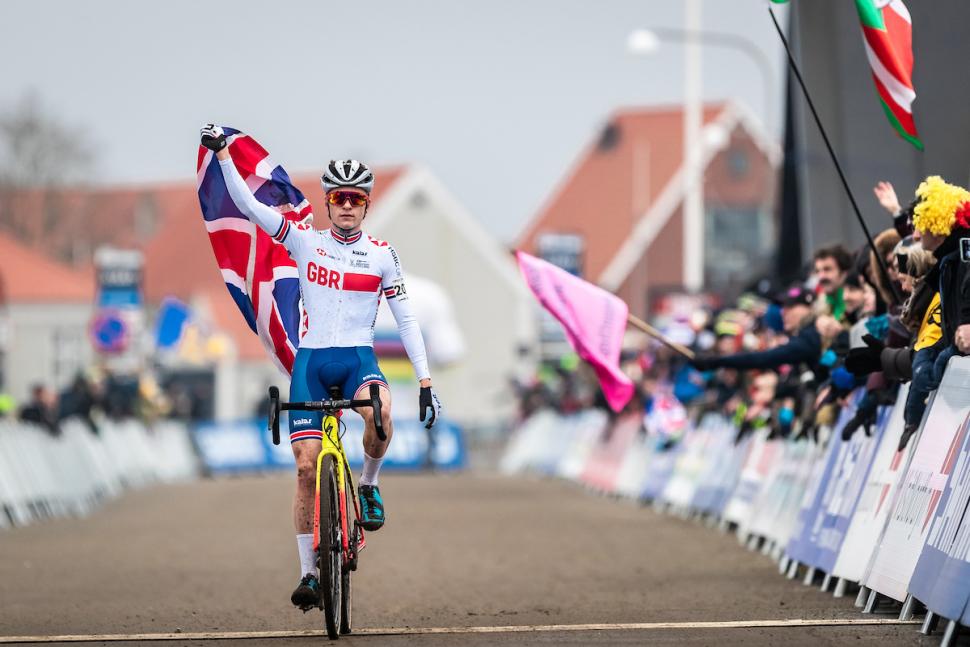 The Great Britain Cycling Team is returning from the UCI Cyclo-cross World Championships in Bogense, Denmark, with two rainbow jerseys after Ben Tulett successfully defended his Junior Men’s title and Tom Pidcock, winner of that event three years ago, took victory in the Men’s Under-23 race.

Tulett, aged 17, made what be the winning move on the fourth lap of the race and said afterwards:  “There was a lot of pressure on me today as I was a first-year junior champion last year. I had to just keep calm and go through the processes.

“I did that really well and picked my moment where I was going to go in the race and did what I needed to do and it worked. So I’m chuffed.

“It feels like a dream come true. It’s what every cyclist dreams of doing, so to win one it’s more than special.”

The move that would bring Pidcock the rainbow jersey at Under-23 level also came on the fourth lap and from that point the Yorkshireman pulled out time on his rivals.

“Yeah it was good, I was feeling really good,” he said. “I had a mechanical with my gears early on, but yeah it turned out alright.

“I was always going to take it easy the first few laps and then you know assess the race form there but yeah, unbelievable,” the 19-year-old added.

In the third of yesterday’s races, the Elite Women’s event, Nikki Brammeier put in a strong performance to finish eighth despite an early mechanical problem, while Helen Wyman was 15th and Beth Crumpton 26th.

Victory went to Sanne Cant as the Belgian took her third world championship victory in the discipline.

In today’s Women’s Under-23 race, 19-year-old Anna Kay finished fifth, just 9 seconds behind the winner, Inge Van Der Heijden of the Netherlands, who led a Dutch clean sweep of the podium.

There was also a Dutch victory in the closing event, the Men’s Elite race, with Mathieu van der Poel reclaiming the rainbow jersey he won in 2015. Great Britain’s Ian Field pulled out with two laps remaining.

You can find video coverage of all the racing on the UCI’s YouTube channel.