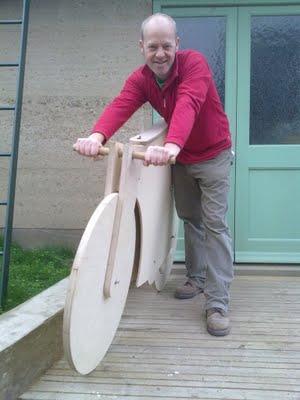 Last month we brought you news of a unique, forthcoming record attempt: the world land speed record for an all-wooden bike.

The man behind the project, Norfolk-based Michael Thompson, has been gradually revealing more technical details via his Splinterbike blog about the machine that will set an inaugural timber bike speed record .However, there are still some big unanswered questions.

Michael has already fashioned a frame along with wheels, gears, steering mechanism and even a wooden saddle to create a basic bike in the 200 hours he has so far spent on the project.

“Things are going better than anticipated but time-wise I reckon I am about half way through the design and build phase,” he told road.cc. “I haven’t yet started to make the bottom bracket, crank and pedal assembly but the design is all there in my head.”

Michael has created a wooden graphic which he says offers a visual representation of the project and which hints at the bike’s "secret weapon". The pear-shaped design – a reference to both the Apple logo and the inevitability of a few pear-shaped moments – contains a clue to a highly significant technical element of the bike, but Michael would not comment on whether the shape was suggestive of an elliptical chainwheel.

As for a venue for the record attempt, the latest news is that the newly constructed London Olympic velodrome is under serious consideration, although Michael has expressed a preference for a location in Norfork. One which could fit that bill is the runway at RAF Coltishall.

The leg power for the attempt will be provided by James Tully, a triathlete friend of Michael’s. James, however, has never ridden a fixed wheel bike before and is hoping to find both a mentor and someone who can supply him with just such a machine as he prepares for the record bid. If you can help, get in touch with the Michael on 07768 772366 or email him: thompson_norwich [at] hotmail.co.uk