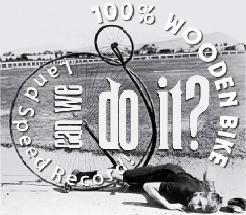 A timber gauntlet has been thrown down by a Norfolk man, Michael Thompson, who is currently  building an all-wooden bike with which to set a world speed record.

No such record currently exists and Michael launched his bid on the day the Tour of Britain passed his front door. Local triathlete James Tully will ride the bike during the record attempt.

“The bike is not going to be a Flintstones type affair," he told road.cc "It’s going to be a lot more serious than that, more like Chris Boardman’s Lotus bike with an aero position and specifically designed to fit James,”

Using one of James’ bikes as a template, Michael is currently marking out the new machine’s outline on cardboard, using a plumb bob to find centre positions of wheels, seat, pedals, bottom bracket etc. before creating a full scale design drawing. The actual build is due to get underway this week, once a delivery of timber has arrived from one of his sponsors.

“We’ll be using furniture grade birch plywood for the frame and exotic hardwoods for other components such as bushes and bearings. Some hardwoods are known to naturally excrete oils, so certain components will effectively be self-lubricating,” he said.

The biggest challenges facing the pair are likely to be the drive system, the wheels and the overall rideability of the bike. Michael remains tight-lipped on how he will overcome the engineering issues fearing that someone, somewhere might use his ideas to beat him to establishing the first record. Just like a track bike, however, the gearing will be so high that a push start will be required and Michael estimates that in its working lifetime the bike will probably cover only about 10 miles. As for an estimated top speed, he thinks 25 - 35mph is achievable.

He told us that this is probably one of the cheapest land speed records which could be attempted, and also, it seems, one of the shortest in terms of lead time.

“We hope to have a rideable bike ready by the end of October and after a couple of weeks testing we should be ready to go for a record attempt in November, weather permitting,” he said.

One unresolved issue, however, is the location of that attempt. While the Lotus test track is relatively close to his home and workshop, the surface may not be smooth enough for a bike with wooden wheels said Michael. He is therefore appealing for any information about a private road or airfield runway that is both smooth and level and that would be available to host the record attempt.