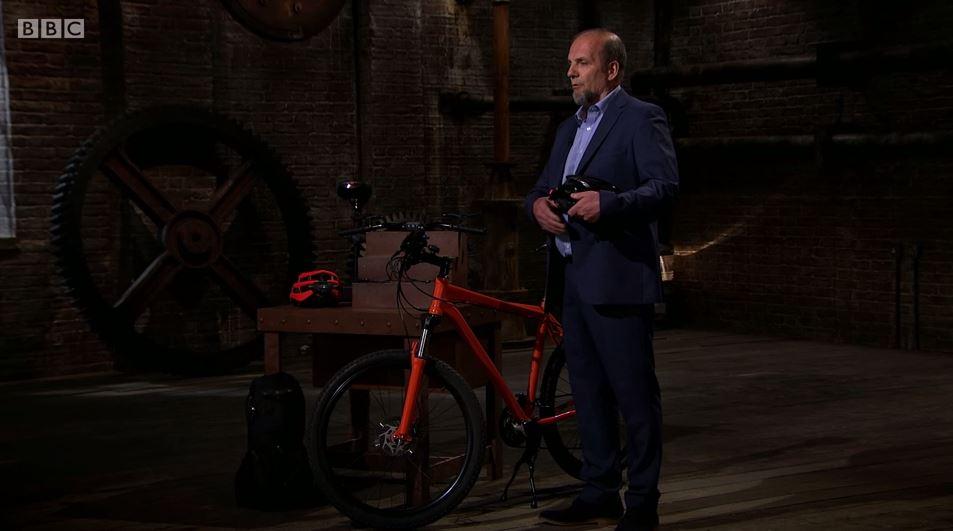 The inventor of a product for cyclists that comprises indicators and a brake light that secured backing from two entrepreneurs in last night’s episode of the BBC Two reality series has revealed that the pair subsequently decided to pull the plug on their investment – although there was no hint of that in the programme screened yesterday.

Sussex-based Steven Ransom already has an established business called Traffic Angel, which develops and markets sensors and CCTV systems for lorries and is used by household names including Tesco and Renault Trucks, and also complies with Transport for London requirements and those of projects such as Crossrail and HS2.

His latest product, Brighter Bikes, is a wireless unit comprising indicator and brake lights that can be fitted to a cycle helmet, bag or backpack, or a seatpost and is operated using buttons mounted on the bike’s handlebars – the latter being a unique feature, according to Ransom.

He arrived at his pitch with a bike and a cycle helmet fitted with the device and was seeking a £90,000 investment in return for a 20 per cent share in the business – filmed in May, you can watch the episode which aired last night on BBC iPlayer, with the segment beginning around 15 minutes 20 seconds into the programme

In an attempt to overcome objections among the potential investors regarding pricing and sales forecasts, Ransom said that his experience from his existing business was that “proven technology drives legislation.”

It was the already successful Traffic Angel business that whetted the appetite of two of the dragons to invest – but which ultimately led to the proposed offer falling through.

Touker Souleyman asked Ransom whether he would consider including a stake in his existing business as part of any deal – momentarily thrown, he regained his composure quickly and replied, “yes.”

Deborah Meaden was the first of the dragons to make an offer. Acknowledging that it “wouldn’t be right of me” to make an offer for 20 per cent of the entire business, with Traffic Angel already showing a healthy profit, she offered £90,000 for a 15 per cent stake in the whole company, an offer subsequently matched by Peter Jones.

Souleyman meanwhile offered the full £90,000 in return for 10 per cent of Traffic Angel and 40 per cent in Brighter Bikes.

In the end, Ransom negotiated that both Meaden and Jones would invest £45,000 in return for a 7.5 per cent each in the entire business, and for viewers of last night’s show, that seemed to be the deal that was struck.

But in a blog post published on the Traffic Angel website, he revealed that the pair had subsequently “dropped a bomb on us” after they “pulled out of the investment.”

He wrote: “At first, we were shell-shocked. And for what reason? All the due diligence was carried out with no issues.

“So, why the turnaround? The principle reason we have been told is that the Dragons PR team had looked at the Traffic Angel equity share the Dragons had asked for in the Den and it was felt they had got too good a deal out of Traffic Angel!

“Their cash injection for 15% of the business undervalued the company and therefore it could be viewed that Peter and Deborah were taking advantage of an already established business in which they had also made nil contribution.

“Fair enough but that was our decision in the Den to have them on board,” he continued.

But Ransom believes his company can turn that apparent setback to its advantage.

“The more we thought about it, the more we asked ourselves, would this really be such a blow? Could Peter and Deborah’s withdrawal actually be that harmful? Was it a blessing in disguise? And on reflection, we really do think this is the case. Yes, the Dragons can open doors that we could never open and we would have welcomed their partnership. But with no Dragons on board, there are still huge benefits.

“We avoid the attendant pressures of being associated with such huge profile names, we retain the equity in the business, we gain national exposure and the icing on the cake – as a result of this whole process, we have put systems in place that have made us much tighter as a business,” he explained.

“All in all, it is a win-win situation. But investment or not, I wouldn’t have swapped this Dragon experience for anything. From all at Traffic Angel and Brighter Bikes, we wish Peter and Deborah well, and thank them for their confidence in the business,” he added.

Indicators for cyclists, or cycle helmets incorporating lights, are nothing new on Dragons’ Den, of course, such products cropping up regularly.

“The assumption is that drivers hit cyclists because we can’t be seen. But the majority of crashes involving cyclists happen because the driver simply didn’t look, and adding small flashing orange lights is going to make, at best, a tiny, tiny difference.”